On December 28, 1833, three short months after the death of Fernando VII, Maria Christina had secretly married an ex-sergeant from the royal guard, Agustín Fernando Muñoz (1808–1873). Maria Christina and Muñoz had several children together while trying to keep their marriage a secret. This fact certainly proves that Maria Christina was carrying on an affair with Muñoz during her marriage with the king.

If Maria Christina had officially made the marriage public, she would have forfeited the regency; but her relations with Muñoz were perfectly well known within the Spanish court. When on 13 August 1836 the soldiers on duty at the summer palace La Granja mutinied and forced the regent to grant a constitution, it was generally, though wrongly, believed that they overcame her reluctance by seizing Muñoz, whom they called her guapo, or fancy man, and threatening to shoot him.

Eventually, news of Maria Christina’s marriage to this low-ranking soldier became public. That news made Maria Christina deeply unpopular. Her position was undermined by news of her remarriage and concerns that she was not actually supportive of her liberal ministers and their policies. Eventually, the army, which was the backbone of Isabella II’s support, and the liberal leadership in the Cortes combined to demand that Maria Christina stand aside from the regency. In 1840 Maria Christina found her position intolerable; she renounced the regency and left Spain with Muñoz. The army commander, General Baldomero Espartero, Count of Luchana, replaced her as regent.

In 1842 Maria Christina purchased the Château de Malmaison as their residence. In 1843, on the overthrow of General Baldomero Espartero they returned to Spain. In 1844, Muñoz’s stepdaughter Queen Isabella II was declared to be of age. On 23 June 1844 Isabella gave to Muñoz the title duque de Riánsares, to which was attached a Grandeza de España; the title came from the river Riánsares, near Muñoz’s birthplace in Tarancón. On October 12, 1844 Isabella gave official consent to the marriage between her mother and Muñoz, and it was publicly performed.

In 1846 Isabella made Muñoz a Knight of the Golden Fleece. On May 30, 1846 she gave Muñoz a second title, marqués de San Agustín. Muñoz was made a Captain General, the highest rank in the Spanish Army. In 1847 Louis Philippe, King of the French, gave Muñoz the title duc de Montmorot; he also invested Muñoz with the Grand Cross of the Légion d’honneur. In 1854, Maria Christina left for France a second time. France remained her primary residence for the remainder of her life.

In 1846, by the express request of the former president Juan José Flores, the Queen participated in an attempt to restore the monarchy in Ecuador. This two-phase plan was first that her son Agustín Muñoz of Bourbon should become King of Ecuador, and later in restorer of the Spanish monarchy in Perú and Bolivia, converting the child in the monarch of the tentative United Kingdom of Ecuador, Perú and Bolivia, with herself and Flores as Regents. When everything was organized, the attempt was denounced by the press and Latin American diplomats, and plans collapsed.

Maria Christina’s illness returned and she suffered from serious coughing, fainting and fever. She died in Le Havre, France on August 22, 1878, aged 72. As the mother of Isabella II, Maria Christina was buried in the royal crypt of El Escorial.

In the previous entries I examined how Richard II of England and Holy Roman Emperor Charles V still retained their title of King and Emperor respectively after their abdications. Here are other examples of monarchs who abdicated or were dethroned yet they kept their royal title.

By remaining kings, those who married after abdicating/being dethroned could even transmit their royal style to their wives – Anne of Bourbon-Parma who married King Mihail Romania and Augusta Victoria of Hohenzollern-Sigmaringen wife of King Manuel II of Portugal all were wed and titled Queen long after their husbands ceased to reign. 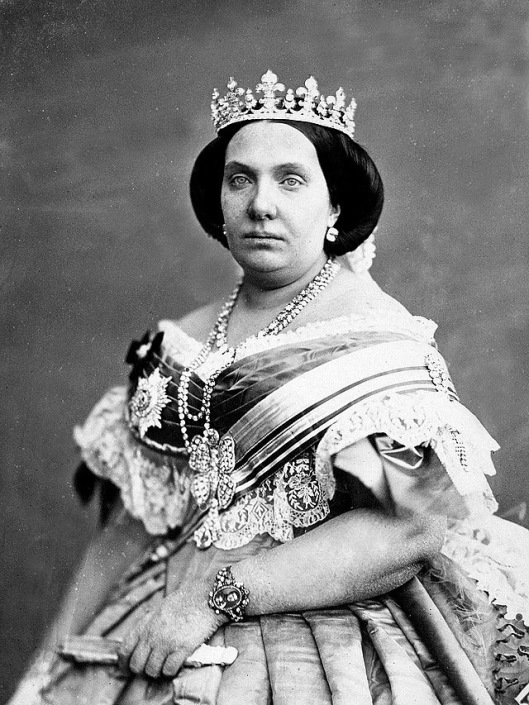 In one case a monarch who abdicated did grant himself a lesser title and yet also kept the title of King. King Willem I of the Netherlands, after his abdication in 1840, styled himself King Willem-Frederick, Count of Nassau. Speaking of the Kingdom of the Netherlands it was only with the abdications of Queens Wilhelmina, Juliana and Beatrix did they downgrade themselves to Royal Highnesses and Princesses.

Here is an example of a monarch that did downgrade his title after his abdication. After the abdication of Queen Isabella II of Spain the Spanish Cortes decided to continue as a monarchy. They chose as their king, Amadeo I (Italian: Amedeo, sometimes anglicized as Amadeus; May 30, 1845 – January 18, 1890) and he was the only King of Spain from the House of Savoy. He was the second son of King Vittorio Emanuele II of Italy and was known for most of his life as the Duke of Aosta, but he reigned briefly as King of Spain from 1870 to 1873.

Amadeo’s reign was fraught with growing republicanism, Carlist rebellions in the north, and the Cuban independence movement. With the possibility of reigning without popular support, Amadeus issued an order against the artillery corps and then immediately abdicated from the Spanish throne on February 11, 1873. At ten o’clock that same night, Spain was proclaimed a republic, at which time Amadeo made an appearance before the Cortes, proclaiming the Spanish people ungovernable. Completely disgusted, the ex-monarch left Spain and returned to Italy, where he resumed the title of Duke of Aosta.

In the final entry I will show why it was deemed necessary to downgrade Edward VIII of the United Kingdom.