Elizabeth was the second child and eldest daughter of James I-VI, King of England, Scotland and Ireland, and his wife, Anne of Denmark. Anne of Denmark was the second daughter of daughter of King Frederik II of Denmark and Norway and Sophie of Mecklenburg-Güstrow. Elizabeth had two siblings, infancy: Henry Frederick, Prince of Wales, who predeceased his parents and James’s future successor, Charles I. Other siblings, Margaret (1598–1600), Robert Bruce Stuart, Duke of Kintyre and Lorne (January 18, 1602 – May 27, 1602), Mary Stuart (1605–1607), and Sophia (June 22, 1606 – June 23, 1606), all died in childhood. 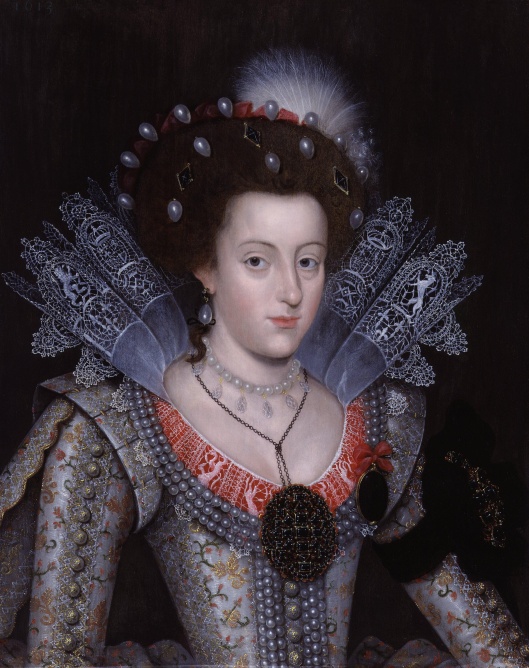 Elizabeth was born at Dunfermline Palace, Fife, on August 19, 1596 at 2 o’clock in the morning. King James rode to the bedside from Callendar, where he was attending the wedding of the Earl of Orkney. At the time of her birth, her father was King of Scots only. Named in honour of Elizabeth I of England, her godmother, the young Elizabeth was christened on 28 November 28, 1596 in the Chapel Royal at Holyroodhouse, and was then proclaimed by the heralds as “Lady Elizabeth”.

When Queen Elizabeth I of England died in 1603, Elizabeth Stuart’s father, James, succeeded as King of England and Ireland. The Countess of Kildare was appointed the princess’s governess. Along with her elder brother, Henry, Elizabeth made the journey south towards England with her mother “in a triumphal progress of perpetual entertainment”. On her father’s birthday, June 19, Elizabeth danced at Worksop Manor with Robert Cecil’s son. Elizabeth remained at court for a few weeks, but “there is no evidence that she was present at her parents’ coronation” on July 25, 1603.

Under the care of Lord and Lady Harington at Coombe Abbey, Elizabeth met Anne Dudley, with whom she was to strike up a lifelong friendship. On April 3, 1604 Princess Elizabeth and her ladies rode from Coombe Abbey to Coventry. The Mayor and Aldermen met her at “Jabet’s Ash on Stoke-green”. She heard a sermon in St Michael’s Church and dined in St Mary’s Hall.

Part of the intent of the Gunpowder Plot of 1605 was to assassinate Elizabeth’s father and the Protestant aristocracy, kidnap the nine-year-old Elizabeth from Coombe Abbey, and place her on the throne of England – and presumably the thrones of Ireland and Scotland – as a Catholic monarch.

The conspirators chose Elizabeth after considering the other available options. Prince Henry, it was believed, would perish alongside his father. Charles was seen as too feeble (having only just learnt to walk) and Mary too young. Elizabeth, on the other hand, had already attended formal functions, and the conspirators knew that “she could fulfil a ceremonial role despite her comparative youth”.

The conspirators aimed to cause an uprising in the Midlands to coincide with the explosion in London and at this point secure Elizabeth’s accession as a puppet queen. She would then be brought up as a Catholic and later married to a Catholic bridegroom. The plot failed when the conspirators were betrayed, and Guy Fawkes was caught by the King’s soldiers before he was able to ignite the powder.

Elizabeth was given a comprehensive education for a princess at that time. This education included instruction in natural history, geography, theology, languages, writing, history, music, and dancing. She was denied instruction in the classics as her father believed that “Latin had the unfortunate effect of making women more cunning”.

By the age of 12, Elizabeth was fluent in several languages, including French, “which she spoke with ease and grace” and would later use to converse with her husband. She also was an excellent rider, had a thorough understanding of the Protestant religion, and had an aptitude for writing letters that “sounded sincere and never stilted”. She also was extremely literary, and “several mementoes of her early love of books exist”.

As the daughter of a reigning monarch, the hand of the young Elizabeth was seen as a very desirable prize. Suitors came from across the continent and were many and varied. They included:

Future King Gustavus II Adolphus of Sweden, son (and later successor) of the King of Sweden. Eldest son of King Carl IX of of Sweden of the House of Vasa and his second wife, Christina of Holstein-Gottorp.

Otto, Hereditary Prince of Hesse, the eldest son of Landgrave Maurice of Hess-Cassel (1572-1632) from his marriage to Agnes (1578-1602), the daughter of Count John George of Solms-Laubach.

Victor Amadeus I, Prince of Piedmont, Duke of Savoy, son of Carlo Emmanuel I, Duke of Savoy and Catherine Micaela of Spain, daughter of King Felipe II of Spain.

Each suitor brought to the proposed marriage the prospect of power and greatness for the young Elizabeth.

Marriage would cost Elizabeth her father and her father’s kingdom. When James had succeeded to the English throne in 1603, England had acquired a new role in European affairs. Unlike the childless Elizabeth I, James, by simply “having children, could play an important role in dynastic politics”. The selection of Elizabeth’s spouse, therefore, had little to do with her personal preference and a great deal to do with the benefits the match could bring.

Most of her suitors were rejected quickly for a variety of reasons. Some simply were not of high enough birth, had no real prospects to offer, or in the case of Gustavus Adolphus, who on all other grounds seemed like a perfect match, because “his country was at war with Queen Anne’s native Denmark”. Furthermore, England could not face another religious revolution, and therefore the religious pre-requisite was paramount.