The future George VI was born at York Cottage, on the Sandringham Estate in Norfolk, during the reign of his great-grandmother Queen Victoria. His father was Prince George, Duke of York (later King George V), the second and eldest surviving son of the Prince and Princess of Wales (later King Edward VII and Queen Alexandra). His mother, the Duchess of York (later Queen Mary), was the eldest child and only daughter of Francis, Duke of Teck, and Mary Adelaide, Duchess of Teck. 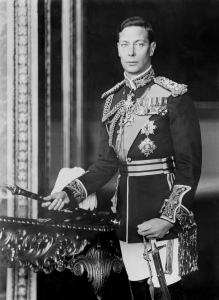 His birthday, December 14, 1895, was the 34th anniversary of the death of his great-grandfather, Albert, Prince Consort. Uncertain of how the Prince Consort’s widow, Queen Victoria, would take the news of the birth, the Prince of Wales wrote to the Duke of York that the Queen had been “rather distressed”. Two days later, he wrote again: “I really think it would gratify her if you yourself proposed the name Albert to her.”

The Queen was mollified by the proposal to name the new baby Albert, and wrote to the Duchess of York: “I am all impatience to see the new one, born on such a sad day but rather more dear to me, especially as he will be called by that dear name which is a byword for all that is great and good.” Consequently, he was baptised “Albert Frederick Arthur George” at St Mary Magdalene Church, Sandringham, three months later.

Within the family, he was known informally as “Bertie”. The Duchess of Teck did not like the first name her grandson had been given, and she wrote prophetically that she hoped the last name “may supplant the less favoured one”. Albert was fourth in line to the throne at birth, after his grandfather, father and elder brother, Edward.

He often suffered from ill health and was described as “easily frightened and somewhat prone to tears”. His parents were generally removed from their children’s day-to-day upbringing, as was the norm in aristocratic families of that era. He had a stammer that lasted for many years. Although naturally left-handed, he was forced to write with his right hand, as was common practice at the time.

Prince Albert suffered from chronic stomach problems as well as knock knees, for which he was forced to wear painful corrective splints. Queen Victoria died on January 22, 1901, and the Prince of Wales succeeded her as King Edward VII. Prince Albert moved up to third in line to the throne, after his father and elder brother.

As the second son of King George V, he was not expected to inherit the throne and spent his early life in the shadow of his elder brother, Edward. He attended naval college as a teenager and served in the Royal Navy and Royal Air Force during the First World War. In 1920, he was made Duke of York.

He married Lady Elizabeth Bowes-Lyon in 1923, and they had two daughters, Elizabeth and Margaret. In the mid-1920s, he had speech therapy for a stammer, which he learned to manage to some degree. George’s elder brother ascended the throne as Edward VIII after their father died in 1936. Later that year, Edward abdicated to marry the American socialite Wallis Simpson, and George became the third monarch of the House of Windsor.

In September 1939, the British Empire and Commonwealth—except Ireland—declared war on Nazi Germany. War with the Kingdom of Italy and the Empire of Japan followed in 1940 and 1941, respectively. George was seen as sharing the hardships of the common people and his popularity soared. Buckingham Palace was bombed during the Blitz while the King and Queen were there, and his younger brother, the Duke of Kent, was killed on active service. George became known as a symbol of British determination to win the war.

Britain and its allies were victorious in 1945, but the British Empire declined. Ireland had largely broken away, followed by independence of India and Pakistan in 1947. George relinquished the title of Emperor of India in June 1948 and instead adopted the new title of Head of the Commonwealth. He was beset by smoking-related health problems in the later years of his reign and died of coronary thrombosis in 1952. He was succeeded by his daughter, Elizabeth II.