The dissolution of the Holy Roman Empire occurred de facto on August 6, 1806, when Emperor Franz II abdicated his Imperial title and released all imperial states and officials from their oaths and obligations to the empire. Although the abdication was considered legal, the dissolution of the imperial bonds was not and several states refused to recognise the end of the empire at the time.

Although today is the date the empire was dissolved, in many ways it was a mere formality as the empire had been deteriorating since the Treaty of Westphalia in 1648 that ended the Thirty Years War. The treaty gave the numerous states within the empire autonomy, ending the empire in all but name. The Swiss Confederation, which had already established quasi-independence in 1499, as well as the Northern Netherlands, also left the Empire at this juncture. The Habsburg Emperors then began to focus on consolidating their own estates in Austria and elsewhere. 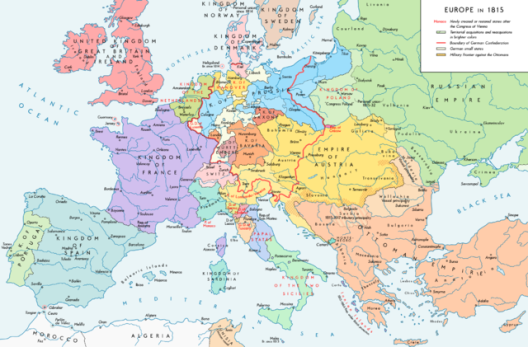 By the reign of Louis XIV of France in the mid 17th and early 18th centuries, France began to surpass the Holy Roman Empire as the dominant power in Europe. Also, the Habsburgs were chiefly dependent on their hereditary lands to counter the recent rise of Prussia; some of whose territories lay inside the Empire. Throughout the 18th century, the Habsburgs were embroiled in various European conflicts, such as the War of the Spanish Succession, the War of the Polish Succession, and the War of the Austrian Succession. The German dualism between Austria and Prussia dominated the empire’s history in the 18th century as the two states vied for supremecy over the German lands.

From 1792 onwards, revolutionary France was at war with various parts of the Empire intermittently. 1792 was also the year Holy Roman Emperor Leopold II died and was succeeded by his son as Emperor Franz II, the last Holy Roman Emperor.

Franz II (February 12, 1768 – March 2, 1835) born in Florence, the capital of Tuscany, where his father reigned as Grand Duke at the time. His parents were Emperor Leopold II (1747–1792) and his wife Maria Luisa of Spain (1745–1792), (daughter of King Carlos III of Spain, Naples and Sicily and Princess Maria Amalia of Saxony, a daughter of the newly elected Polish king Augustus III and his (ironically) Austrian wife Maria Josepha of Austria.) Though Franz had a happy childhood surrounded by his many siblings, his family knew He was likely to be a future Emperor (his uncle Emperor Joseph II had no surviving issue from either of his two marriages), and so in 1784 the young Archduke Franz was sent to the Imperial Court in Vienna to educate and prepare him for his future role. 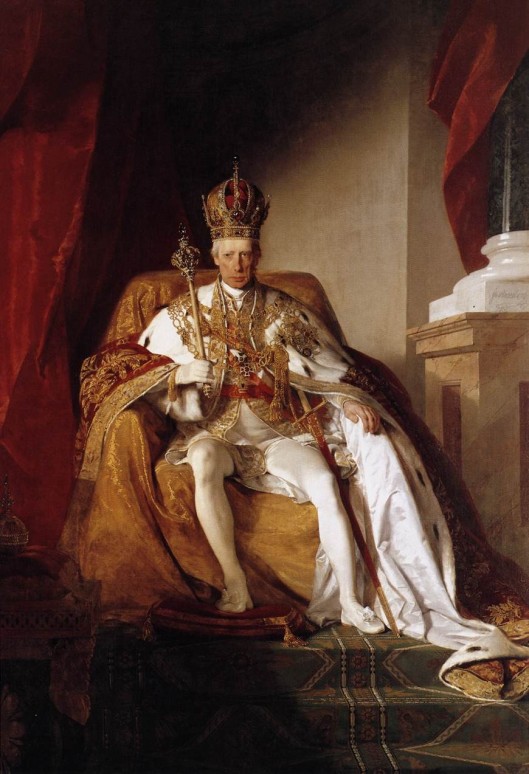 As Emperor and the leader of the large multi-ethnic Habsburg Empire, Franz II felt threatened by Napoleon’s social and political reforms, which were being exported throughout Europe with the expansion of the first French Empire. Franz had a fraught relationship with France. His aunt Marie Antoinette, the wife of Louis XVI and Queen consort of France, was guillotined by the revolutionaries in 1793, at the beginning of his reign. Franz, on the whole, was indifferent to her fate (she was not close to his father, Leopold II and although Franz had met her, he had been too young at the time to have any memory of his aunt). Georges Danton attempted to negotiate with the Emperor for Marie Antoinette’s release, but Franz was unwilling to make any concessions in return.

In 1804, with the growing ambitions of Napoleon, who had himself proclaimed Emperor of the French that year, Franz, knowing the end of the Holy Roman Empire was drawing nigh, established the Austrian Empire and became Franz I, the first Emperor of Austria, ruling from 1804 to 1835. This act made him the only Doppelkaiser (double emperor) in history.For the two years between 1804 and 1806, Franz used the title and style by the Grace of God elected Roman Emperor, ever Augustus, hereditary Emperor of Austria and he was called the Emperor of both the Holy Roman Empire and Austria. He was also Apostolic King of Hungary, Croatia and Bohemia as Franz I.

With Napoleon’s victory over Austria at the Battle of Austerlitz on December 2, 1805, the French Emperor “transformed himself from the guarantor of the Reich to the arbiter of its fate.” The subsequent Peace of Pressburg (December 26) created deliberate ambiguities in the imperial constitution. Bavaria, Baden and Württemberg were to have full sovereignty while remaining a part of the Germanic Confederation, a novel name for the Empire.

With the the signing of the Peace of Pressburg Emperor Franz II recognized the kingly titles assumed by the Electors of Bavaria and Württemberg, which foreshadowed the end of the Holy Roman Empire. At this point, he believed his position as Holy Roman Emperor to be untenable, so on August 6, 1806, he abdicated the throne, declaring the empire to be already dissolved in the same declaration. This was a political move to impair the legitimacy of the new entity, the Confederation of the Rhine, which had been created by Napoleon. 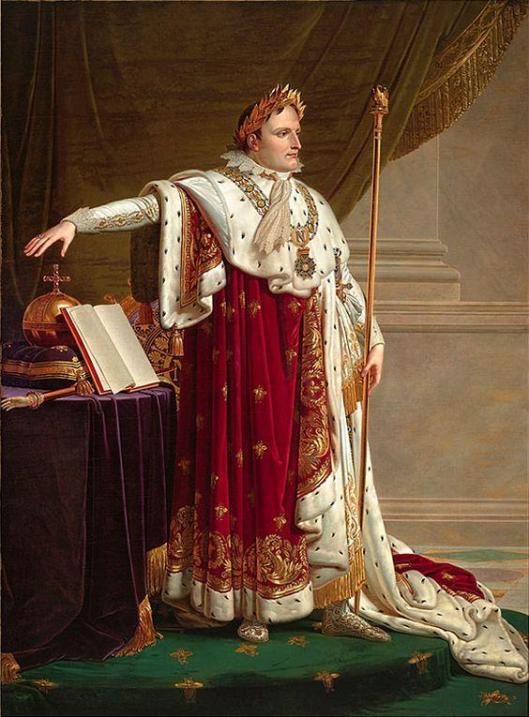 Napoleon, Emperor of the French

After the defeat of Napoleon the major European powers convened the Congress of Vienna. The objective of the Congress was to provide a long-term peace plan for Europe by settling critical issues arising from the French Revolutionary Wars and the Napoleonic Wars. The goal was not simply to restore old boundaries but to resize the main powers so they could balance each other and remain at peace. The last Holy Roman Emperor Franz II, in his role as Emperor of Austria served as the first president of the German Confederation following its confirmation by the Congress in 1815.