Henry Stuart, Lord Darnley Duke of Albany (December 7, 1545 – February 10, 1567), styled as Lord Darnley until 1565, was king consort of Scotland from 1565 until his murder at Kirk o’ Field in 1567. Many contemporary narratives describing his life and death refer to him as Lord Darnley, his title as heir apparent to the Earldom of Lennox, and it is by this appellation that he is now generally known.

He was the second but eldest surviving son of Matthew Stewart, 4th Earl of Lennox, and his wife Lady Margaret Douglas. Darnley’s maternal grandparents were Archibald Douglas, 6th Earl of Angus, and Margaret of England daughter of Henry VII of England and widow of James IV of Scotland. He was a first cousin and the second husband of Mary I, Queen of Scots, and was the father of her son James VI of Scotland, who succeeded Elizabeth I of England as King James I.

On February 3, 1565, Darnley left London and by February 12, he was in Edinburgh. On February 17, he presented himself to Mary at Wemyss Castle in Fife. James Melville of Halhill reported that “Her Majesty took well with him, and said that he was the lustiest and best proportioned long man that she had seen.” After a brief visit to his father at Dunkeld, Darnley returned with Mary and the court to Holyrood on February 24. The next day, he heard John Knox preach, and he danced a galliard with Mary at night. From then on, he was constantly in Mary’s company.

Darnley was his wife’s half-first cousin through two different marriages of their grandmother, Margaret Tudor, putting both Mary and Darnley high in the line of succession for the English throne. Darnley was also a descendant of a daughter of James II of Scotland, and so also in line for the throne of Scotland.

Despite protests from Elizabeth I of England, the marriage took place on July 29 1565, according to Roman Catholic rites in Mary’s private chapel at Holyrood, but Darnley (whose religious beliefs were unfixed – he was raised as a Catholic, but was later influenced by Protestantism) refused to accompany Mary to the nuptial Mass after the wedding itself.

The couple didn’t know one another when they wed and soon after the marriage be gan Mary became aware of Darnley’s vain, arrogant and unreliable qualities, which threatened the well-being of the state. Darnley was unpopular with the other nobles and had a violent streak, aggravated by his drinking. Mary refused to grant Darnley the Crown Matrimonial, which would have made him the successor to the throne if she died childless, despite the fact that he was in line to the Scottish throne. By August 1565, less than a month after the marriage, William Cecil heard that Darnley’s insolence had driven Lennox from the Scottish court. Mary soon became pregnant.

David Rizzo,was an Italian courtier, born close to Turin, a descendant of an ancient and noble family still living in Piedmont, the Riccio Counts di San Paolo e Solbrito, who rose to become the private secretary of Mary I, Queen of Scots. Mary’s husband, Lord Darnley, is said to have been jealous of their friendship, because of rumours that he had impregnated Mary, and joined in a conspiracy of Protestant nobles, led by Patrick Ruthven, 3rd Lord Ruthven, to murder him.

Mary was having dinner with Rizzio and a few ladies-in-waiting when Darnley joined them, accused his wife of adultery Mary, who was six months pregnant, was held at gunpoint when Rizzio, who was hiding behind The Queen, was stabbed 56 times on March 9, 1566 by Darnley and his confederates, Protestant Scottish nobles. The murder was the catalyst for the downfall of Darnley, and it had serious consequences for Mary’s subsequent reign. On March 27, , the Earl of Morton and Lord Ruthven, who were both present at Rizzio’s murder and had fled to England, wrote to Cecil claiming that Darnley had initiated the murder plot and recruited them, because of his “heich quarrel” and “deadly hatred” of Rizzio. 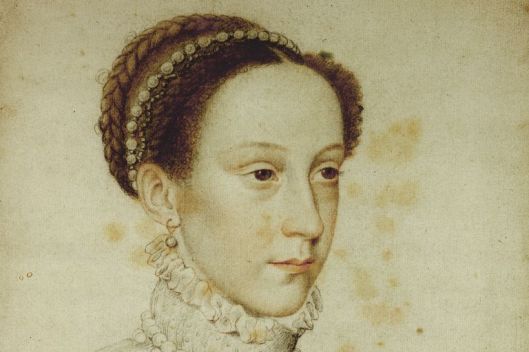 Mary and Darnley’s son James (the future King James VI of Scotland and I of England) was born on June 19, 1566 at Edinburgh Castle. He was baptised Charles James on December 17, 1566 in a Catholic ceremony held at Stirling Castle. His godparents were Charles IX of France, Elizabeth I of England and Emmanuel Philibert, Duke of Savoy. Mary refused to let the Archbishop of St Andrews, whom she referred to as “a pocky priest”, spit in the child’s mouth, as was then the custom.

Following the birth of James, the succession was more secure, but Darnley and Mary’s marriage continued to struggle. Darnley, however, alienated many who would otherwise have been his supporters through his erratic behavior. His insistence that he be awarded the Crown Matrimonial was still a source of marital frustration.

During the weeks leading up to his death, Darnley was recovering from a bout of smallpox (or, it has been speculated, syphilis). He was described as having deformed pocks upon his face and body. He stayed with his family in Glasgow, until Mary brought him to recuperate at Old Provost’s lodging at Kirk o’ Field, a two-story house within the church quadrangle, a short walk from Holyrood, with the intention of incorporating him into the court again.

Darnley stayed at Kirk o’ Field while Mary attended the wedding of Bastian Pagez, one of her closest servants, at Holyrood. Around 2 A.M. on the night of 9–10 February 9-10, 1567, while Mary was away, two explosions rocked the foundation of Kirk o’ Field. These explosions were later attributed to two barrels of gunpowder that had been placed in the small room under Darnley’s sleeping quarters. Darnley’s body and the body of his valet William Taylor were found outside, surrounded by a cloak, a dagger, a chair, and a coat. Darnley was dressed only in his nightshirt, suggesting he had fled in some haste from his bedchamber.

Darnley was apparently smothered. There were no visible marks of strangulation or violence on the body. A post-mortem revealed internal injuries, thought to have been caused by the explosion. John Knox claimed the surgeons who examined the body were lying, and that Darnley had been strangled, but all the sources agree there were no marks on the body and there was no reason for the surgeons to lie as Darnley was murdered either way.