A message from Crown Princess Margareta of Romania, Custodian of the Crown of Romania, on the passing of her father, HM King Michael I of Romania. 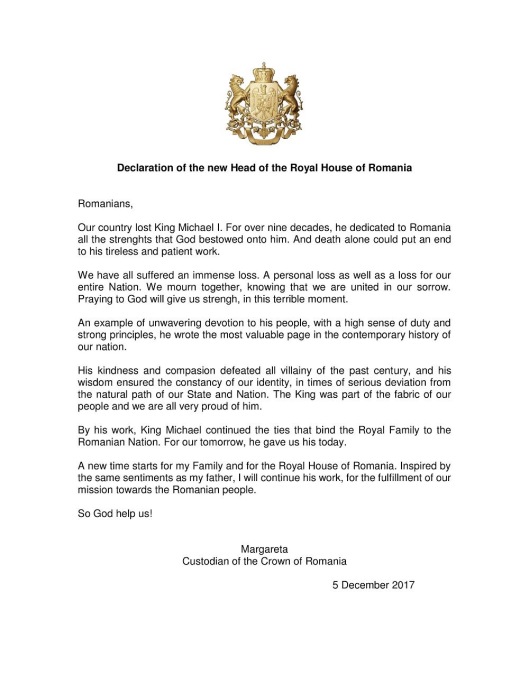 Last week I wrote of the controversy surrounding the disputed successor to the Headship of the Royal House of Saxony. This raises the question of does the head of these former ruling houses have the power to change centuries old house laws? With so many disputes after the head of the house dies, I guess the consensus is that they do not have that power or right. I think what may be closer to the truth is that the heads of these former ruling dynasties is that they have no power to make their new laws or ruling stick past their tenure as head of the house.

The Imperial House of Austria has been somewhat more successful in changing their house laws. They had had very rigid marital laws and when the now head of the house, Archduke Karl (Emperor Karl II to his supporters) married in 1993 to Baroness Francesca Thyssen-Bornemisza. The marriage received the dynastic authorization of Karl’s father, Archduke Otto who was then head of the House of Habsburg, despite objections from some members of the dynasty because the brides family was not aristocratic enough. Baroness Francesca is the only daughter of Baron Hans Heinrich Thyssen-Bornemisza de Kászon, a European industrialist, and his third wife, Fiona Campbell-Walter. The Thyssen-Bornemisza family is of the nobility of pre-republican Hungary and Transylvania, but since they did not descend in the canonically legitimate male line from a family of dynastic, mediatised or alter Adel status, many former Habsburg family members protested the marriage. Since that time Otto amended the rigid marriage rules to allow marriages into noble families that would not have been deemed acceptable during the times when the dynasty ruled.

Romania is another case. King Michael was ousted in 1946 (many say illegally) and he leaves no male heir. His eldest daughter is Princess Margarita and in 2007 the king designated her as his heir with the titles of “Crown Princess of Romania” and “Custodian of the Romanian Crown.” This is technically against the Romanian kingdom’s last democratically approved constitution of 1923 which was in effect while the monarchy was extant. That constitution stated that upon the death of King Michael, and should he have no sons, the claim to the Crown devolves once again upon the Hohenzollern-Sigmaringen family from which the Romanian royal family descends.

The Constitution of 1923 provides for an agnatic primogeniture (basically the “Salic law”) which means males only may inherit the throne, barring females, and females may not pass succession rights to their children. However, the 1923 Constitution is no longer in affect but many feel that the traditions behind those ancient laws still carry the rule of the day. Under the old constitution the next in line to the Romanian throne are the descendants of Friedrich Wilhelm, Prince of Hohenzollern (1924-2010).

These are the Hohenzollern members in line to the throne under the old Constitution.

The Romanian situation is complex and so I will continue with this next week and then give my overall opinion on if a former monarch or head of a former ruling dynasty does have the right to change their house laws.

As my love for European Royalty quickly expanded beyond and interest in the British Royal Family and into other European royal houses I began to wonder about the royal families of countries where the monarchy had been abolished. I wondered what became of them, who would be king/queen/emperor had the monarchy not been abolished? Is there any chance that any of these former countries would return to a monarchical form of government? How does these former royal families live and how are they treated in their former territories?

Tomorrow I will begin looking at all the pretenders to vacant or non existent thrones in Europe. I have learned that the pretenders to these thrones live various lifestyles. Some are more public while others live more private lives. There is also various levels of wealth these people live with. Some families still hold onto the traditions and rules that the family held when they were in power. Another thing I learned that almost all of these former thrones are hotly contested among these families and there are more than one member claiming the throne of their ancestors.

So in the days to come I will examine the claims and the claimants to the thrones of France (Royal & Imperial), Russia, Italy, the Kingdom of the Two Sicilies, Austria-Hungary, Greece, Romania, Bulgaria and other minor royal houses of Germany.

HRH Prince Henri VII, Count of Paris and Duke of France. Pretender to the throne of France.