Prince Friedrich Heinrich Albrecht of Prussia (October 4, 1809 – October 14, 1872) was the fifth son and youngest child of King Friedrich Wilhelm III of Prussia and Louise of Mecklenburg-Strelitz and she was the fourth daughter and sixth child of Duke Charles of Mecklenburg and his wife Princess Friederike of Hesse-Darmstadt.

Louise of Mecklenburg-Strelitz’s father, Charles, was a brother of Queen Charlotte, wife of King George III of the United Kingdom, and her mother Frederike was a granddaughter of Ludwig VIII, Landgrave of Hesse-Darmstadt. Louise’s maternal grandmother, Landgravine Marie Louise of Hesse-Darmstadt, and her paternal first-cousin Princess Augusta Sophia of the United Kingdom served as sponsors at her baptism; her second given name came from Princess Augusta Sophia.

At the time of her birth, Louise’s father was not yet the ruler of Mecklenburg-Strelitz (he would not succeed his brother as Duke until 1794), and consequently she was not born in a court, but rather in a less formal home. 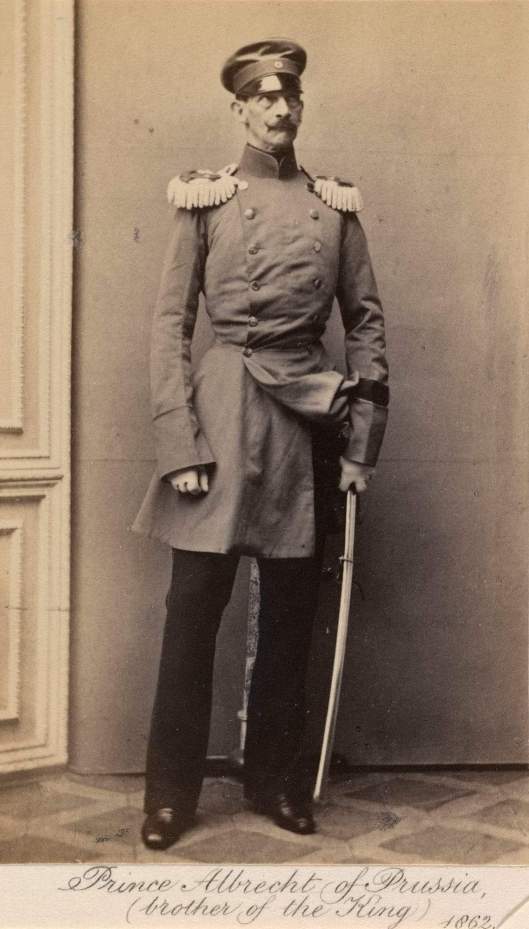 Prince Albrecht later joined the forces of his nephew Prince Friedrich Charles of Prussia and Friedrich Franz II, Grand Duke of Mecklenburg-Schwerin in the campaign against the Armée de la Loire.

After the war Albrecht was awarded the title of a Generaloberst. He died in Berlin, where he is buried at the Charlottenburg Palace Park Mausoleum. He was the 74th Grand Cross of the Order of the Tower and Sword.

In The Hague, on 14 September 1830 Albert married his cousin Princess Marianne of the Netherlands, Princess of Orange-Nassau the daughter of King Willem I of the Netherlands and Princess Wilhelmine of Prussia the fourth child of eight born to King Friedrich Wilhelm II of Prussia and Frederica Louisa of Hesse-Darmstadt.

The marriage was dissolved on March 28, 1849. They had five children:

Princess Marianne was a woman who thought and lived very unconventionally for her time. Because she left her unfaithful husband Prince Albrecht of Prussia and had an illegitimate son (she openly recognized him) with her partner Johannes van Rossum (with whom she also lived in a common-law marriage), she was banished from the Kingdom of Prussia.

Princess Marianne of the Netherlands, Princess of Orange-Nassau

As this second union was considered a morganatic marriage, the couple temporarily had to avoid the Prussian court. Albrecht acquired a vineyard in Loschwitz near Dresden, Saxony, where he had a residence, Albrechtsberg Castle, erected in 1854.

In 1830 Albrecht had acquired a city palace in Berlin on Wilhelmstraße, then called Prinz-Albrecht-Palais. An adjacent street off Wilhelmstraße laid out in 1891 was named Prinz-Albrecht-Straße. After the Nazi Machtergreifung it became notorious as the seat of the Gestapo and the Reichsführer-SS.

The Prinz-Albrecht-Palais itself from 1934 served as the headquarters of the SS Sicherheitsdienst under Reinhard Heydrich, from 1939 the Reichssicherheitshauptamt. In 1944 the building was heavily damaged by air raids and finally razed to the ground in 1955, leaving the foundations and cellars exposed to the open air. They remain so today, and are used as part of the Topography of Terror project.