👣 The couple have said, “We are all doing well and Wolfie is the best big brother to Sienna.”

Buckingham Palaced released the information that HRH The Duke of York and Sarah, Duchess of York announce the engagement of their daughter HRH Princess Beatrice of York and Edoardo Mapelli Mozzi are now engaged! 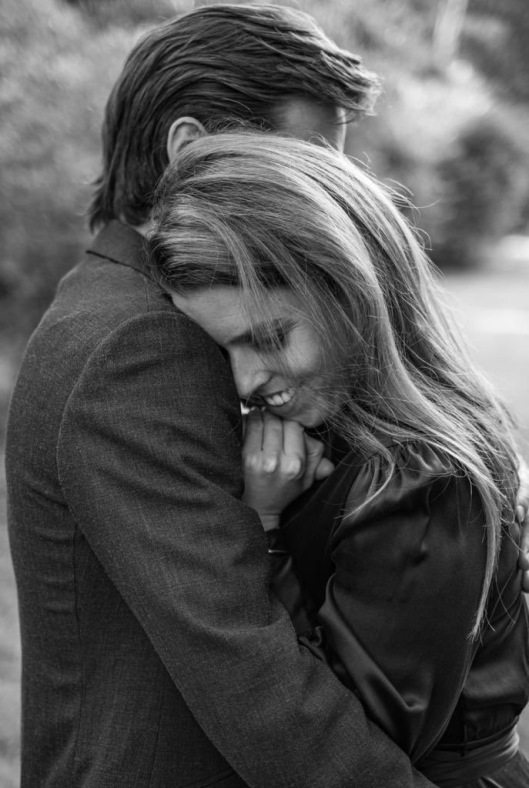 Since yesterday was the 24th birthday of HRH Princess Beatrice of York I thought I would feature her today. Along with her sister, HRH Princess Eugenie of York, they have become more active recently as member of the royal family. Princess Beatrice is the daughter of HRH Prince Andrew, the Duke of York and his former spouse, Sarah, Duchess of York. Personally think she has turned out very well and as she has gotten older has grown more dedicated in doing more service work for the royal family. One of her first official duties was accompanying HM the Queen at the Royal Maundy services this past April. She also welcomed the Olympic flame on the steps of Harewood House near Leeds a few weeks ago as part of the build up to the Olympics.

Beatrice began her formal education at the independent Upton House School in Windsor, in 1991. In 1995 she and her sister both attended the independent Coworth Park School. Beatrice furthered her education at the independent St. George’s School in Ascot from 2000 to 2007. She was diagnosed with dyslexia as a child which delayed her her GCSE exams for one year. Her university studies began in r 2008 where she studied at Goldsmiths, University of London and graduated in 2011 BA in History and History of Ideas. Someone that loves history, my kind of gal!

I have a lot of respect for Princess Beatrice. It could be tempting to slide into a life of luxury and frivolous partying as a member of royalty and she has not done that. Although I am sure with the hard working Windsors that type of lifestyle would not be tolerated. She has been very active. She has visited HIV-infected children in Russia as well as Britain. She supported Springboard for Children which is an organization dedicated to assisting children with learning difficulties. She also supported the Teenage Cancer Trust. In April 2010 as part of a group that was raising funds for the group Children in Crisis, she became the first and only member of the Royal Family to complete the London Marathon!

At 24 this is an impressive resume! I must confess I think HRH has beautiful stunning eyes and is a lovely young woman. I look to the future with eagerness to see how she grows in service to the royal family. At one time there were rumors that the queen would strip Beatrice and her sister of their HRH style when they turned 18. This has not happened and for that I am glad. I think Beatrice is an exceptional royal with a strong and positive future ahead of herself.

One cannot talk about the genealogy of royalty without discussing cousin marriages. Royalty has a reputation for being inbred and that reputation is deserved although I don’t see the issue pejoratively. I do recognize that this was acceptable during different eras when people did not know the role genetics played in heredity and when social conventions were different.

The reasons cousins married were often due to two things. 1). monarchies were and are, to some extent, under the class system. Although it has lessened a great deal. An example is when current Crown Prince Haakon of Norway married a single mother, Mette-Marit Tjessem Høiby, many Norwegians were upset with his choice, deeming her inappropriate. However, since the marriage in 2001 the fervor over her past has been largely forgotten and Mette-Marit has become an exemplary crown princess. This demonstrates that both the royals themselves and their citizens/subjects have had the expectation that royalty will marry their own kind. Even among us commoners we often choose spouses that are within our social group and social class. It is a very common human behavior and practice. 2). Another reason that cousin marriages were prevalent is one that is unintentional.  Young princesses were often pawns and objects of barter in the days when monarchies wielded power. Alliances through marriage were sought to ensure political stability between nations. However, reality was far different. With a minimal number of aristocratic and royal families to choose from, this lead to all these families being interrelated.

By the 19th century there were an occasional marriage done in the name of political alliances. The marriage between the Victoria, Princess Royal and the future Friedrich III, German Emperor and Prussia is a good example. For the most part marriages were selected for appropriateness in terms of matching people with similar personalities and social rank. The monarchs themselves, such as Queen Victoria, were often active in selecting suitable mates for their children and grandchildren. Even though these mates were often selected for them, the respectable parties did have a choice and at times refused certain prospects.

There were times when cousins met each other and actually fell in love, such as the case with the last Russian Czar, Nicholas II and Princess Alix of Hesse by Rhine. Then there were times when the love was not reciprocated. For example, Alix’s sister, Elizabeth (called Ella within the family) was chased after by her cousin, the future Wilhelm II, German Emperor and Prussia, but she wanted nothing to do with him. At one point, Alix was also pursued by her cousin, Prince Albert Victor, Duke of Clarence and heir to the British throne after his father, Albert Edward, the Prince of Wales, but she tuned him down. Albert Victor’s brother, the future King George V of Great Britain, fell in love with his cousin, Princess Marie of Edinburgh, but she turned him down despite George’s father and her father approving of the match. Marie’s mother, Grand Duchess Maria Alexandrovna of Russia, did not like the British Royal Family (despite being married into that family) so she had her daughter turn down the proposal. George’s mother, Princess Alexandra of Denmark, the Princess of Wales, also did not approve of the match

Even though these cousin marriages did not happen the participants found other cousins to marry. Ella married Grand Duke Sergi of Russia, the uncle of her sister’s husband (Nicholas II) and brother to Marie of Edinburgh’s mother. Wilhelm II married Princess Augusta Victoria of Schleswig-Holstein-Sonderburg-Augustenburg (the granddaughter of Feodora of Leiningen the half-sister to Wilhelm’s grandmother, Queen Victoria of Great Britain). Albert Victor became engaged to Princess Victoria Mary (May) of Teck, the daughter of Princess Mary Adelaide of Cambridge, who was the first cousin to Albert Victor’s grandmother, Queen Victoria of Great Britain. When Albert Victor died within a month after his engagement to May of Teck, Queen Victoria thought that May was such a wonderful catch and would make an excellent Queen Consort she encouraged a match between May and George. After a suitable time George and May were wed. All these connections are enough to make your head spin!

I think this demonstrates how times have changed in over 100 years. I don’t think if Prince Henry (Harry) were to marry his cousin, Princess Beatrice of York, people would see it as a good thing. Although I do like it when royals marry royals, if only for making studying genealogy interesting, I am not sure when we will see the existing monarchies of Europe marrying royals once again. If it ever does happen it will happen the way we commoners fall in love.