Mary, born at St James’s Palace in London on April 30, 1662, was the eldest daughter of the Duke of York (the future King James II-VII), and his first wife, Anne Hyde. Mary’s uncle was Charles II, who ruled the three kingdoms of England, Scotland and Ireland; her maternal grandfather, Edward Hyde, 1st Earl of Clarendon, served for a lengthy period as Charles’s chief advisor.

William III (William Henry; Dutch: Willem Hendrik; November 4, 1650 – March 8, 1702), also widely known as William of Orange, was the sovereign Prince of Orange from birth, Stadtholder of Holland, Zeeland, Utrecht, Guelders, and Overijssel in the Dutch Republic from the 1670s, and King of England, Ireland, and Scotland from 1689 until his death in 1702. As King of Scotland, he is known as William II.

Mary was baptised into the Anglican faith in the Chapel Royal at St James’s, and was named after her ancestor, Mary I, Queen of Scots. Her godparents included her father’s cousin, Prince Rupert of the Rhine. Although her mother bore eight children, all except Mary and her younger sister Anne died very young, and Charles II had no legitimate children. Consequently, for most of her childhood, Mary was second in line to the throne after her father.

William was the only child of Willem II, Prince of Orange, and Mary, Princess Royal and Princess of Orange, the daughter of Charles I of England, Scotland, and Ireland.

William’s mother showed little personal interest in her son, sometimes being absent for years, and had always deliberately kept herself apart from Dutch society. William’s education was first laid in the hands of several Dutch governesses, some of English descent, including Walburg Howard and the Scottish noblewoman, Lady Anna Mackenzie. From April 1656, the prince received daily instruction in the Reformed religion from the Calvinist preacher Cornelis Trigland, a follower of the Contra-Remonstrant theologian Gisbertus Voetius.

During the war with France, William tried to improve his position by marrying in his first cousin Mary, elder surviving daughter of the Duke of York. Mary was eleven years his junior and he anticipated resistance to a Stuart match from the Amsterdam merchants who had disliked his mother (another Mary Stuart), but William believed that marrying Mary would increase his chances of succeeding to Charles’s kingdoms, and would draw England’s monarch away from his pro-French policies.

As previously mentioned William was the son King Charles II’s sister, Mary, Princess Royal, and thus fourth in the line of succession to the three kingdoms after James, Duke of York, and his daughters Mary, and Anne.

At first, Charles II opposed the alliance with the Dutch ruler—he preferred that Mary wed the heir to the French throne, the Dauphin Louis, thus allying his realms with Catholic France and strengthening the odds of an eventual Catholic successor in Britain; but later, under pressure from Parliament and with a coalition with the Catholic French no longer politically favourable, he approved the proposed union. Therefore King Charles II relented to the match.

James, Duke of York was not inclined to consent, but Charles II pressured his brother to agree. Charles wanted to use the possibility of marriage to gain leverage in negotiations relating to the war with France but William insisted that the two issues be decided separately.

The Duke of York eventually agreed to the marriage, after pressure from chief minister Lord Danby and the King, who incorrectly assumed that it would improve James’s popularity among Protestants.

Therefore, the age of fifteen, Mary became betrothed to her first cousin, the Protestant Stadtholder of Holland, William III of Orange. When James told Mary that she was to marry her cousin, “she wept all that afternoon and all the following day”.

Bishop Henry Compton married William and a tearful Mary in St James’s Palace on November 4, 1677, which was also William’s birthday.

The bedding ceremony to publicly establish the consummation of the marriage was attended by the royal family, with the King Charles himself drawing the bedcurtains. Mary accompanied her husband on a rough sea crossing to the Netherlands later that month, after a delay of two weeks caused by bad weather. Rotterdam was inaccessible because of ice, and they were forced to land at the small village of Ter Heijde, and walk through the frosty countryside until met by coaches to take them to Huis Honselaarsdijk. On December 14, they made a formal entry to The Hague in a grand procession.

Mary became pregnant soon after the marriage, but miscarried. After a further illness later in 1678, she never conceived again.

Throughout William and Mary’s marriage, William had only one reputed mistress, Elizabeth Villiers, in contrast to the many mistresses his uncles openly kept.

Mary, Princess Royal (Mary Henrietta; November 4, 1631 – December 24, 1660) was Countess of Nassau by marriage to Prince Willem II of Orange and co-regent for her son during his minority as Sovereign Prince of Orange from 1651 to 1660.

Mary Henrietta was born at St. James’s Palace, London to Charles I of England, Scotland and Ireland and Henrietta Maria de Bourbon of France, the eldest daughter of the youngest daughter of King Henri IV of France (Henri III of Navarre) and his second wife, Marie de’ Medici. 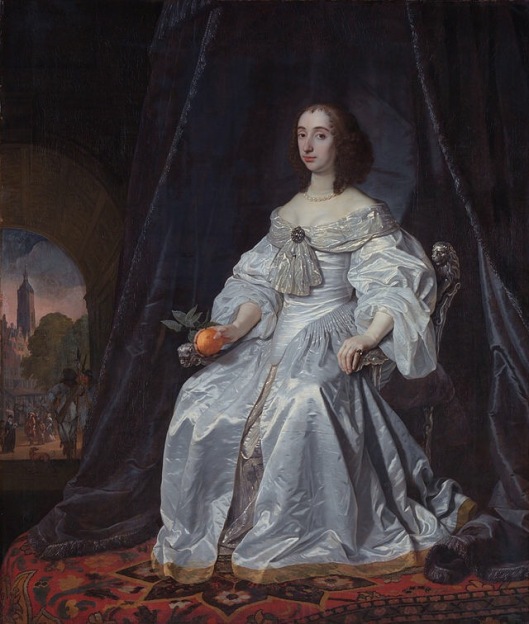 Princess Mary was named after her mother. Her father, King Charles I, liked to call his wife Henrietta Maria simply “Maria”, with the English people calling her “Queen Mary.”

Charles I designated Mary Princess Royal in 1642, thus establishing the tradition that the eldest daughter of the British sovereign might bear this title. The title came into being when Queen Henrietta Maria, the daughter of Henri IV of France to imitate the way the eldest daughter of the French king was styled (Madame Royale). Until that time, the eldest daughters of English and Scottish kings were variously titled lady or princess (The younger daughters of British sovereigns were not consistently titled Princess of England/Scotland or Great Britain with the style Royal Highness until the accession of George I in 1714). George I of Great Britain codified styles and titles using the German system and this code is still in effect today.

Betrothal portrait of Princess Mary and Prince Willem of Orange

Her father, Charles I, wished that Mary should marry her first cousin Balthasar Carlos, Prince of Asturias, the son of Felipe IV of Spain. The Prince of the Asturias died on October 9, 1646 (aged 16) before succeeding to the throne. Mary’s first cousin, Charles I Ludwig, Elector Palatine, was also a suitor for her hand. Both proposals fell through and she was betrothed to Willem of Orange, the son and heir of Frederik Hendrik, Prince of Orange and Stadtholder of the United Provinces, and of Amalia of Solms-Braunfels. The marriage took place on May 2, 1641 at the Chapel Royal, Whitehall Palace, London.

The Prince and Princess of Orange

The marriage was reputedly not consummated for several years because the bride was nine years old. In 1642, Mary moved to the Dutch Republic with her mother, Queen Henrietta Maria, and in 1644, as the daughter-in-law of the stadtholder, Frederik Hendrik she became more engaged in courtly and public events.

In March 1647, Mary’s husband, Willem II, succeeded his father as stadholder. However, in November 1650, just after his attempt to capture Amsterdam from his political opponents, he died of smallpox.

The couple’s only child, Willem III Prince of Orange and Stadthouder of the Netherlands (later William III of England, Scotland and Ireland), was born two weeks after his father’s death. Mary, now a Dowager, was obliged to share the guardianship of her infant son with her mother-in-law, Amalia of Solms-Braunfels, and brother-in-law, Friedrich Wilhelm I, Elector of Brandenburg. They had more power over the young Prince’s affairs than she, as evidenced by his being christened Willem, and not Charles as she had desired. 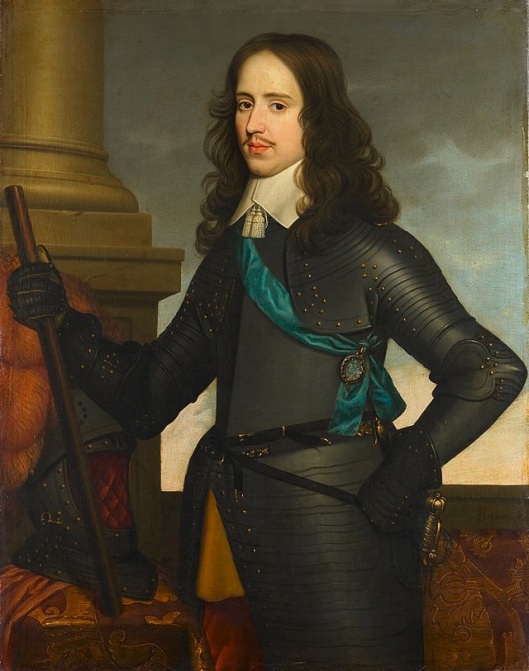 Prince Willem II of Orange, Stadthouder of the Netherlands

She was unpopular with the Dutch because of her sympathies with her own family, the Stuarts. She lived in the palace of the Stadthouder at the Binnenhof in the Hague, the building complex that now houses the Senate of the Netherlands. Her boudoir is still intact. At length, public opinion having been further angered by the hospitality that she showed to her brothers, the exiled Charles II and the Duke of York (later James II-VII) she was forbidden to receive her relatives.

Her moral reputation was damaged by rumours that she was having an affair with (or had been secretly married to) Henry Jermyn, a member of her brother James’ household. The rumours were probably untrue, but Charles II took them seriously, and tried to prevent any further contact between Jermyn and Mary. From 1654 to 1657, Mary was usually not in Holland. In 1657, she became regent on behalf of her son for the principality of Orange, but the difficulties of her position led her to implore the assistance of her first cousin Louis XIV of France and Navarre.

The restoration of Mary’s brother, Charles II in England and Scotland greatly enhanced the position of the Princess of Orange and her son in Holland. In September 1660, she returned to England. She died of smallpox on December 24, 1660, at Whitehall Palace, London and was buried in Westminster Abbey.
I