The fifth child and only son out of eight children, Orléans was still not married at the death of his father. In 1721, the ambassador of France to Russia suggested a marriage between Orléans and one of the two unmarried daughters of Peter I of Russia: the Grand Duchess Anna Petrovna (known for her fluency in French) or her younger sister, Grand Duchess Yelizaveta Petrovna.

But the idea of a marriage with a Russian Grand Duchess had to be abandoned as there soon arose difficulties relative to religion and order of precedence. Orléans was “only” a great-grandson of the King of France and as such was only entitled to the style of Serene Highness. A Russian grand duchess, however, as a daughter of the tsar, was entitled to the style of Imperial Highness. Anna Petrovna later married the Duke of Schleswig-Holstein-Gottorp. 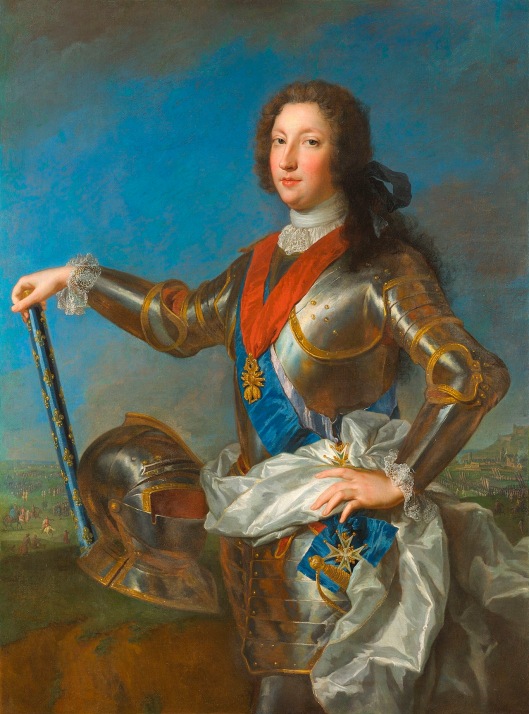 In 1723, a German princess was suggested. She was Johanna of Baden-Baden (1704–1726), the daughter of Ludwig-Wilhelm, Margrave of Baden-Baden and his wife Sibylle-Auguste of Saxe-Lauenburg. The marriage was agreed upon by his mother, and the bride’s small dowry set at 80,000 livres. The marriage by proxy took place on June 18, 1724 at Rastatt, in Baden-Württemberg, Germany, then on July 13, in the town of Sarry (Marne), in France. It was at Sarry that the couple first met. They fell in love at first sight. At the French court, the new Duchess of Orléans was known as Jeanne de Bade.

The ducal couple had two children, but only one survived infancy.
Later life

On September 5, 1725, the court celebrated the marriage of Louis XV to the Polish princess, Marie Leszczyńska at Fontainebleau. Earlier, Orléans had represented Louis XV at the proxy marriage ceremony, which had taken place the previous August 15, at Strasbourg. The young queen would later have a lot of sympathy for the quiet and pious Duke.

The following year, on August 8, 1726, the duke’s young wife died three days after the birth of her second child, Louise-Marie, at the Palais-Royal in Paris. After the early death of his wife, and until his own death in 1752, Louis lived by strict rules.

His son, Louis-Philippe would liked to have married Madame Henriette, the second daughter of Louis XV, but Louis XV refused. The king did not want the House of Orléans to be as powerful as it had been during the regency of Orléans’ father. In 1737 he, along with his aunt the Dowager Duchess of Bourbon, were asked to be godparents of the king’s son, Louis de France, Dauphin of France (1729–1765).

On December 17, 1743, Orléans’ son married Louise-Henriette de Bourbon, the daughter of Louis-Armand II, Prince of Conti and his wife, Louise-Élisabeth de Bourbon. The Condé and Orléans families had been at odds since the Orléans had assumed the rank of First Prince of the Blood in 1709, and it was hoped that the marriage would settle their mésentente. Although passionate at first, the marriage soon proved unhappy because of the young bride’s débaucherie.

He died in 1752, at the age of forty-eight, at the Abbaye de Sainte Geneviève, having lost most of his sanity. On his deathbed, on suspicion of Jansenist views, he was refused communion by the Abbé Bouettin of the Saint-Étienne-du-Mont church, but was given the last rites by his own chaplain. Louis d’Orléans had outlived all his siblings apart from Charlotte-Aglaé, the Duchess of Modena and Reggio.

He was buried at the Val-de-Grâce in Paris.

Louis, Duke of Orléans (August 4, 1703 – February 4, 1752) was a member of the royal family of France, the House of Bourbon, and as such was a prince du sang. At his father’s death, he became the First Prince of the Blood (Premier Prince du Sang). Known as Louis le Pieux and also as Louis le Génovéfain, Louis was a pious, charitable and cultured prince, who took very little part in the politics of the time.

Louis d’Orléans was born at the Palace of Versailles in 1703 to Philippe II, Duke of Orléans and his wife, Françoise-Marie de Bourbon, the youngest legitimised daughter of King Louis XIV of France and Navarre and of his mistress Madame de Montespan. He was the only son of eight children, and at his birth, he was given the courtesy title of Duke of Chartres as the heir to the Orléans fortune and titles. His maternal grandfather, the king, in addition gave him the allowance reserved for the First Prince of the Blood, a rank he was not yet eligible to hold.

Louis was very close to his younger sister Louise Élisabeth d’Orléans, who was to become Queen of Spain for seven months in 1724. He was not, however, close to his older sister, Charlotte-Aglaé d’Orléans, the wife of Francesco d’Este, Duke of Modena. They were in frequent conflict during her many return visits to the French court from Modena

Upon the death of his maternal grandfather Louis XIV in 1715, his father (the old king’s nephew) was selected to be the regent of the country for the five-year-old new king, Louis XV. The court was moved to Paris so his father could govern the country with the young king close by his side. Louis XV was installed in the Palais du Louvre opposite the Palais-Royal, the Paris home of the Orléans family.

During the regency, Orléans was seen as the “third personage of the kingdom” immediately after Louis XV and his own father, the Regent. He was formally admitted to the Conseil de Régence on January 30, 1718. Despite his father’s wishes, though, Orléans was never to play an overly public or political role in France. The following year, he was made the governor of the Dauphiné. He was not forced, however, to move there in order to fulfill his new duties. Later, he resigned.

Upon the death of his father on December 2, 1723, the twenty-year-old Louis assumed the hereditary title of Duke of Orléans and became the head of the House of Orléans. He also became the next in line to the throne of France until the birth of Louis XV’s first-born son in 1729.

This was because King Felipe V of Spain, the second son of Louis, the Grand Dauphin and uncle of the young king, had renounced his rights to the French throne for himself, and his descendants, upon his accession to the throne of Spain in 1700.

Although the Regent had hoped that his son would assume as prominent a role in government as he had, the post of prime minister went to Louis’ older cousin, Louis-Henri, Duke of Bourbon, when the Regent died. Constantly trying to consolidate and maintain his power at court, the Duke of Bourbon was always suspicious of Louis’ motivations and was frequently opposed to him.

In 1723, Orléans was conspicuous for his hostility to the former prime minister, Cardinal Dubois. Orléans also worked with Claude le Blanc and Nicolas Prosper Bauyn d’Angervilliers in the post of Secretary of State for War; Louis himself worked in this position from 1723–1730