Marie-Thérèse arrived in Vienna on January 9, 1796, in the evening, twenty-two days after she had left the Temple.

She later left Vienna and moved to Mitau, Courland (now Jelgava, Latvia), where her father’s eldest surviving brother, the comte de Provence, lived as a guest of Tsar Paul I of Russia. He had proclaimed himself King of France as Louis XVIII after the death of Marie-Thérèse’s brother. With no children of his own, he wished his niece to marry her cousin, Louis-Antoine, duc d’Angoulême, son of his brother, the comte d’Artois. Marie-Thérèse agreed.

Louis-Antoine was a shy, stammering young man. His father tried to persuade Louis XVIII against the marriage. However, the wedding took place on June 10, 1799 at Jelgava Palace (modern-day Latvia). The couple had no children. 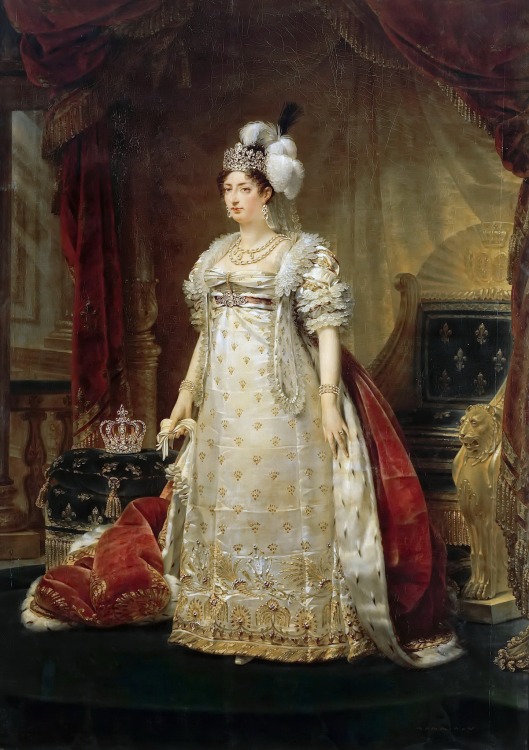 The royal family moved to Great Britain, where they settled at Hartwell House, Buckinghamshire, while her father-in-law spent most of his time in Edinburgh, where he had been given apartments at Holyrood House.
The long years of exile ended with the abdication of Napoleon I in 1814, and the first Bourbon Restoration, when Louis XVIII stepped upon the throne of France, twenty-one years after the death of his brother Louis XVI.

Louis XVIII attempted to steer a middle course between liberals and the Ultra-royalists led by the Charles Philippe, Count of Artois. He also attempted to suppress the many men who claimed to be Marie-Thérèse’s long-lost younger brother, Louis XVII. Those claimants caused the princess a good deal of distress.

Marie-Thérèse found her return emotionally draining and she was distrustful of the many Frenchmen who had supported either the Republic or Napoleon. She visited the site where her brother had died, and the Madeleine Cemetery where her parents were buried. The royal remains were exhumed on January 18, 1815 and re-interred in Saint-Denis Basilica, the royal necropolis of France, on January 21, 1815, the 22nd anniversary of Louis XVI’s execution.

In March 1815, Napoléon returned to France and rapidly began to gain supporters and raised an army in the period known as the Hundred Days. Louis XVIII fled France, but Marie-Thérèse, who was in Bordeaux at the time, attempted to rally the local troops. The troops agreed to defend her but not to cause a civil war with Napoléon’s troops. Marie-Thérèse stayed in Bordeaux despite Napoléon’s orders for her to be arrested when his army arrived. Believing her cause was lost, and to spare Bordeaux senseless destruction, she finally agreed to leave.

Her actions caused Napoléon to remark that she was “the only man in her family.”

After Napoléon was defeated at Waterloo on June 18, 1815, the House of Bourbon was restored for a second time, and Louis XVIII returned to France.

On February 13, 1820, tragedy struck when Charles Philippe, Count of Artois, younger son, Charles Ferdinand d’Artois, Duke of Berry was assassinated by the anti-Bourbon and Bonapartist sympathiser Pierre Louvel, a saddler. Soon after, the royal family was cheered when it was learned that Marie-Caroline of Bourbon-Two Sicilies, Duchess of Berry was pregnant at the time of her husband’s death.

On September 29, 1820, Marie-Caroline of Bourbon-Two Sicilies, Duchess of Berry gave birth to a son, Henri, duc de Bordeaux, the so-called “Miracle child”, who later, as the Bourbon pretender to the French throne, assumed the title of Comte de Chambord.

Louis XVIII died on September 16, 1824, and was succeeded by his younger brother, Charles Philippe, Count of Artois as King Charles X. Marie-Thérèse’s husband was now heir to the throne, and she was addressed as Madame la Dauphine. However, anti-monarchist feeling was on the rise again. Charles’s ultra-royalist sympathies alienated many members of the working and middle classes.

On August 2, 1830, after Les Trois Glorieuses, the Revolution of July 1830 which lasted three days, Charles X, who with his family had gone to the Château de Rambouillet, abdicated in favor of his son, Louis-Antoine who was briefly King Louis XIX, but in turn abdicated in favor of his nephew, the nine-year old duc de Bordeaux. However, in spite of the fact that Charles X had asked him to be regent for the young king, Louis-Philippe, duc d’Orléans accepted the crown when the Chambre des Députés named him King of the French.

On August 4, in a long cortège, Marie-Thérèse left Rambouillet for a new exile with her uncle, her husband, her young nephew, his mother, the duchesse de Berry, and his sister Louise Marie Thérèse d’Artois. On 16 Augustn16, the family had reached the port of Cherbourg where they boarded a ship for Britain. King Louis-Philippe had taken care of the arrangements for the departure and sailing of his cousins.

The royal family lived in what is now 22 (then 21) Regent Terrace in Edinburgh until 1833 when the former king chose to move to Prague as a guest of Marie-Thérèse’s cousin, Emperor Franz I of Austria. They moved into luxurious apartments in Prague Castle. Later, the royal family left Prague and moved to the estate of Count Coronini near Gorizia, which was then Austrian but is in Italy today. Marie-Thérèse devotedly nursed her uncle through his last illness in 1836, when Charles X died of cholera.

Her husband, Louis-Antoine died in 1844 and was buried next to his father. Marie-Thérèse then moved to Schloss Frohsdorf, a baroque castle just outside Vienna, where she spent her days taking walks, reading, sewing and praying. Her nephew, who now styled himself as the comte de Chambord, and his sister joined her there. In 1848, Louis Philippe’s reign ended in a revolution and, for the second time, France became a Republic.

Marie-Thérèse died of pneumonia on October 19, 1851, three days after the fifty-eighth anniversary of the execution of her mother. She was buried next to her uncle/father-in-law, Charles X, and her husband, Louis XIX, in the crypt of the Franciscan monastery church of Castagnavizza in Görz, then in Austria, now Kostanjevica in the Slovenian city of Nova Gorica. Like her deceased uncle, Marie-Thérèse had remained a devout Roman Catholic.

Later, her nephew Henri, the comte de Chambord, last male of the senior line of the House of Bourbon; his wife, the comtesse de Chambord (formerly the Archduchess Marie-Thérèse of Austria-Este, daughter of Duke Francis IV of Modena and his wife, Princess Maria Beatrice of Savoy); and the comte’s only sister, Louise, Duchess of Parma, were also laid to rest in the crypt in Görz. The famous antiquarian the Duke of Blacas was also buried there in honor of his dutiful years of service as a minister to Louis XVIII and Charles X.

Marie-Thérèse is described on her gravestone as the “Queen Dowager of France”, a reference to her husband’s 20 min rule as King Louis XIX of France.