The only surviving legitimate child of James V of Scotland, Mary was six days old when her father died and she acceded to the throne. During her childhood, Scotland was governed by regents, first by the heir to the throne, James Hamilton, Earl of Arran, and then by her mother, Mary of Guise.

In 1548, she was betrothed to François, the Dauphin of France, and was sent to be brought up in France, where she would be safe from invading English forces during the Rough Wooing. Mary married François in 1558, becoming queen consort of France from his accession as King François II of France in 1559 until his death in December 1560.

Widowed, Mary returned to Scotland in August 1561. The early years of her personal rule were marked by pragmatism, tolerance, and moderation, with Mary retaining advisers such as James Stewart, Earl of Moray and William Maitland of Lethington. 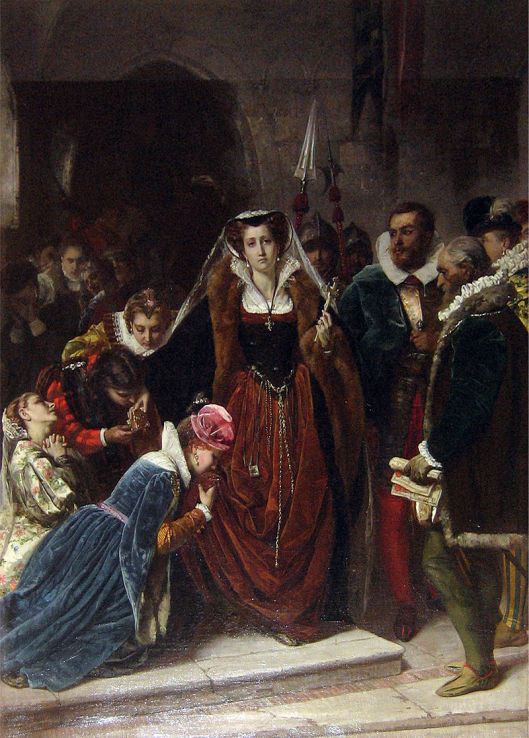 Following the Scottish Reformation, the tense religious and political climate that Mary encountered on her return to Scotland was further agitated by prominent Scots such as John Knox, who openly questioned whether her subjects had a duty to obey her. Mary was tolerant in religious matters, issuing a proclamation accepting the religious settlement in Scotland as she had found it upon her return, and governing as the Catholic monarch of a Protestant kingdom.

Mary married her half-cousin, Henry Stuart, Lord Darnley, in 1565, and in June 1566, they had a son, James. In February 1567, Darnley’s residence was destroyed by an explosion, and he was found murdered in the garden.

James Hepburn, 4th Earl of Bothwell, was generally believed to have orchestrated Darnley’s death, but he was acquitted of the charge in April 1567, and the following month, he married Mary.

Following an uprising against the couple, Mary was imprisoned in Loch Leven Castle. On July 24, 1567, she was forced to abdicate in favour of her one-year-old son. After an unsuccessful attempt to regain the throne, she fled southward seeking the protection of her first cousin once removed, Elizabeth I of England.

Mary had once claimed Elizabeth’s throne as her own and was considered the legitimate sovereign of England by many English Catholics, including participants in a rebellion known as the Rising of the North. Perceiving Mary as a threat, Elizabeth had her confined in various castles and manor houses in the interior of England. After eighteen and a half years in captivity, Mary was found guilty of The Babington Plot, a plot to assassinate Elizabeth in 1586.

The Babington Plot was a plan in 1586 to assassinate Queen Elizabeth I, a Protestant, and put Mary I, Queen of Scots, her Roman Catholic cousin, on the English throne.

It led to Mary’s execution, a result of a letter sent by Mary (who had been imprisoned for 19 years since 1568 in England at the behest of Elizabeth) in which she consented to the assassination of Elizabeth.

The long-term goal of the plot was the invasion of England by the Spanish forces of King Felipe II and the Catholic League in France, leading to the restoration of the old religion. The plot was discovered by Elizabeth’s spymaster Sir Francis Walsingham and used to entrap Mary for the purpose of removing her as a claimant to the English throne.

The chief conspirators were Anthony Babington and John Ballard. Babington, a young recusant, was recruited by Ballard, a Jesuit priest who hoped to rescue the Scottish Queen. Working for Walsingham were double agents Robert Poley and Gilbert Gifford, as well as Thomas Phelippes, a spy agent and cryptanalyst, and the puritan spy Maliverey Catilyn.

The turbulent Catholic deacon Gifford had been in Walsingham’s service since the end of 1585 or the beginning of 1586. Gifford obtained a letter of introduction to Queen Mary from a confidant and spy for her, Thomas Morgan. Walsingham then placed double agent Gifford and spy decipherer Phelippes inside Chartley Castle, where Queen Mary was imprisoned. Gifford organised the Walsingham plan to place Babington’s and Queen Mary’s encrypted communications into a beer barrel cork which were then intercepted by Phelippes, decoded and sent to Walsingham.

On July 7, 1586, the only Babington letter that was sent to Mary was decoded by Phelippes. Mary responded in code on July 17, ordering the would-be rescuers to assassinate Queen Elizabeth. The response letter also included deciphered phrases indicating her desire to be rescued: “The affairs being thus prepared” and “I may suddenly be transported out of this place”.

At the Fotheringay trial in October 1586, Elizabeth’s Lord High Treasurer Lord Burghley and Walsingham used the letter against Mary who refused to admit that she was guilty. But she was betrayed by her secretaries Nau and Curle who confessed under pressure that the letter was mainly truthful.

Mary was beheaded the following year at Fotheringhay Castle on February 8, 1587.

The executioner Bull and his assistant knelt before her and asked forgiveness, as it was typical for the executioner to request the pardon of the one being put to death. Mary replied, “I forgive you with all my heart, for now, I hope, you shall make an end of all my troubles.” She was blindfolded by Kennedy with a white veil embroidered in gold, knelt down on the cushion in front of the block on which she positioned her head, and stretched out her arms. Her last words were, In manus tuas, Domine, commendo spiritum meum (“Into thy hands, O Lord, I commend my spirit”).

Mary was not beheaded with a single strike. The first blow missed her neck and struck the back of her head. The second blow severed the neck, except for a small bit of sinew, which the executioner cut through using the axe. Afterwards, he held her head aloft and declared “God save the Queen.”

When the news of the execution reached Elizabeth, she became indignant and asserted that Davison had disobeyed her instructions not to part with the warrant and that the Privy Council had acted without her authority. Elizabeth’s vacillation and deliberately vague instructions gave her plausible deniability to attempt to avoid the direct stain of Mary’s blood. Davison was arrested, thrown into the Tower of London, and found guilty of misprision. He was released nineteen months later, after Cecil and Walsingham interceded on his behalf.

Mary’s request to be buried in France was refused by Elizabeth. Her body was embalmed and left in a secure lead coffin until her burial in a Protestant service at Peterborough Cathedral in late July 1587. Her entrails, removed as part of the embalming process, were buried secretly within Fotheringhay Castle. Her body was exhumed in 1612 when her son, King James VI and I, ordered that she be reinterred in Westminster Abbey in a chapel opposite the tomb of Elizabeth.

Mary’s life, marriages, lineage, alleged involvement in plots against Elizabeth, and subsequent execution established her as a divisive and highly romanticised historical character, depicted in culture for centuries.

In late January 1567, Queen Mary I of Scotland prompted her husband, Henry Stuart, Lord Darnley, King consort of Scotland to return to Edinburgh. He recuperated from his illness in a house belonging to the brother of Sir James Balfour at the former abbey of Kirk o’ Field, just within the city wall.

Mary visited him daily, so that it appeared a reconciliation was in progress. On the night of February 9–10, 1567, Mary visited her husband in the early evening and then attended the wedding celebrations of a member of her household, Bastian Pagez. In the early hours of the morning, an explosion devastated Kirk o’ Field. Darnley was found dead in the garden, apparently smothered. There were no visible marks of strangulation or violence on the body. James Hepburn, 4th Earl of Bothwell, James Stewart, 1st Earl of Moray (the illegitimate son of King James V), Secretary Maitland, the Earl of Morton and even Queen Mary herself were among those who came under suspicion. 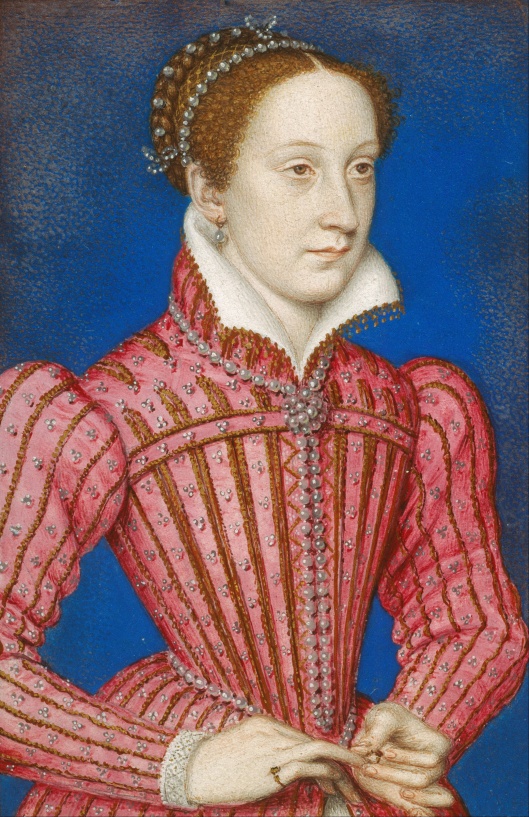 However, by the end of February, Bothwell was generally believed to be guilty of Darnley’s assassination. Matthew Stewart, 4th Earl of Lennox, Darnley’s father, demanded that Bothwell be tried before the Estates of Parliament, to which Mary agreed, but Lennox’s request for a delay to gather evidence was denied. In the absence of Lennox and with no evidence presented, Bothwell was acquitted after a seven-hour trial on April 12. A week later, Bothwell managed to convince more than two dozen lords and bishops to sign the Ainslie Tavern Bond, in which they agreed to support his aim to marry the queen.

Between April 21 and 23, 1567, Mary visited her son, Prince James, at Stirling for the last time. On her way back to Edinburgh on April 24, Mary was abducted, willingly or not, by Lord Bothwell and his men and taken to Dunbar Castle, where he may have raped her. On May 6, Mary and Bothwell returned to Edinburgh. On May 15, at either Holyrood Palace or Holyrood Abbey, they were married according to Protestant rites. Bothwell and his first wife, Jean Gordon, who was the sister of Lord Huntly, had divorced twelve days previously.

Originally, Mary believed that many nobles supported her marriage, but relations quickly soured between the newly elevated Bothwell (created Duke of Orkney) and his former peers and the marriage proved to be deeply unpopular. Catholics considered the marriage unlawful, since they did not recognise Bothwell’s divorce or the validity of the Protestant service. Both Protestants and Catholics were shocked that Mary should marry the man accused of murdering her husband. The marriage was tempestuous, and Mary became despondent.

Twenty-six Scottish peers, known as the confederate lords, turned against Mary and Bothwell and raised their own army. Mary and Bothwell confronted the lords at Carberry Hill on June 15, but there was no battle, as Mary’s forces dwindled away through desertion during negotiations.

Bothwell was given safe passage from the field. The lords took Mary to Edinburgh, where crowds of spectators denounced her as an adulteress and murderer. The following night, she was imprisoned in Loch Leven Castle on an island in the middle of Loch Leven. Between July 20 and 23, Mary miscarried twins. On July 24, 1567, Mary was forced to abdicate in favour of her one-year-old son James. The infant King James VI of Scotland was placed under the regency of the Earl of Moray, while Bothwell was driven into exile. He was imprisoned in Denmark, became insane and died in 1578.

On May 2, 1568, Mary escaped from Loch Leven Castle with the aid of George Douglas, brother of Sir William Douglas, the castle’s owner. Managing to raise an army of 6,000 men, she met Moray’s smaller forces at the Battle of Langside on May 13. Defeated, Mary fled south. After spending the night at Dundrennan Abbey, she crossed the Solway Firth into England by fishing boat on May 16. She landed at Workington in Cumberland in the north of England and stayed overnight at Workington Hall. On May 18, local officials took her into protective custody at Carlisle Castle.

Mary had once claimed Elizabeth’s throne as her own and was considered the legitimate sovereign of England by many English Catholics, including participants in a rebellion known as the Rising of the North. Perceiving Mary as a threat, Elizabeth had her confined in various castles and manor houses in the interior of England. After eighteen and a half years in custody, Mary was found guilty of plotting to assassinate Elizabeth in 1586, and was beheaded the following year at Fotheringhay Castle. Mary’s life, marriages, lineage, alleged involvement in plots against Elizabeth, and subsequent execution established her as a divisive and highly romanticised historical character, depicted in culture for centuries.