From the Emperor’s Desk: I’m Irish and in honour of St. Patrick’s Day tomorrow I’m going to do a several part series on the Kingdom of Ireland, starting with the Lordship of Ireland in Part I.

A monarchical system of government existed in Ireland from ancient times until—for what became the Republic of Ireland—the early twentieth century. Northern Ireland, as part of the United Kingdom, remains under a monarchical system of government. The Gaelic kingdoms of Ireland ended with the Norman invasion of Ireland, when the kingdom became a fief of the Holy See under the Lordship of the King of England.

Richard de Clare, 2nd Earl of Pembroke (of the first creation), Lord of Leinster, Justiciar of Ireland (1130 – 1176) was an Anglo-Norman nobleman notable for his leading role in the Anglo-Norman invasion of Ireland. Like his father, Richard fitz Gilbert has since become commonly known by his nickname Strongbow. As the son of the first ‘earl’, he succeeded to his father’s estates in 1148, but was deprived of the title by King Henry II of England in 1154 for siding with King Stephen of England against Henry’s mother, the Empress Matilda.

In 1155, three years after the Synod of Kells, the Papal Bull Laudabiliter was issued by Pope Adrian IV, (the only Englishman to have served in that office) which was addressed to the Angevin King Henry II of England. It urged Henry to invade Ireland to bring its church under the Roman system and to conduct a general reform of governance and society throughout the island. The existence of the bull has been disputed by scholars over the centuries; no copy is extant but scholars cite the many references to it as early as the 13th century to support the validity of its existence.

In the 1160s the King of Leinster, Diarmait Mac Murchada, was deposed by the High King of Ireland, Tairrdelbach Ua Conchobair. Diarmait turned to Henry for assistance in 1167, and the English King agreed to allow Diarmait to recruit mercenaries within his empire. Henry II of England invaded Ireland to control Strongbow, who he feared was becoming a threat to the stability of his own kingdom on its western fringes.

Henry undertook a wave of castle-building during his visit in 1171 to protect his new territories—the Anglo-Normans had superior military technologies to the Irish, and castles gave them a significant advantage. Henry hoped for a longer-term political solution, similar to his approach in Wales and Scotland, and in 1175 he agreed to the Treaty of Windsor, under which Rory O’Connor would be recognised as the High King of Ireland, giving homage to Henry and maintaining stability on the ground on his behalf.

This policy proved unsuccessful, as O’Connor was unable to exert sufficient influence and force in areas such as Munster: Henry instead intervened more directly, establishing a system of local fiefs of his own through a conference held in Oxford in 1177. 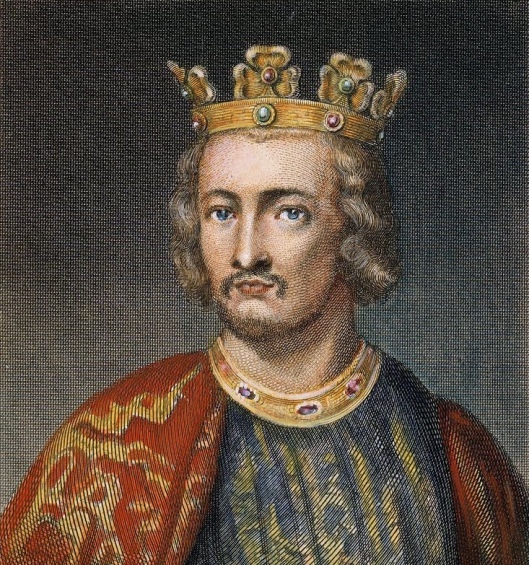 John, King of England and Lord of Ireland

At the Oxford parliament in May 1177, Henry replaced William FitzAldelm and granted his youngest son, John Lackland, his Irish lands, so becoming the Lord of Ireland (Dominus Hiberniae) in when he was 10 years old, with the territory being known in English as the Lordship of Ireland. Henry had wanted John to be crowned King of Ireland on his first visit in 1185, but Pope Lucius III specifically refused permission, citing the dubious nature of a claim supposedly provided by Pope Adrian IV years earlier.

Following the deaths of John’s older brothers (Henry the Young King, King Richard the Lionheart, Geoffrey of Brittany) he became King of England in 1199, and so the Lordship of Ireland, instead of being a separate country ruled by a junior Norman prince, came under the direct rule of the Angevin crown. In the legal terminology of John’s successors, the “lordship of Ireland” referred to the sovereignty vested in the Crown of England; the corresponding territory was referred to as the “land of Ireland”.

The kings of England claimed lordship over the whole island, but in reality the king’s rule only ever extended to parts of the island. The rest of the island—known as Gaelic Ireland—remained under the control of various Gaelic Irish kingdoms or chiefdoms, who were often at war with the Anglo-Normans.

The area under English rule and law grew and shrank over time, and reached its greatest extent in the late 13th and early 14th centuries. The lordship then went into decline, brought on by its invasion by Scotland in 1315–18, the Great Famine of 1315–17, and the Black Death of the 1340s. The fluid political situation and English feudal system allowed a great deal of autonomy for the Anglo-Norman lords in Ireland, who carved out earldoms for themselves and had almost as much authority as some of the native Gaelic kings. Some Anglo-Normans became Gaelicised and rebelled against the English administration.

English monarchs continued to use the title “Lord of Ireland” to refer to their position of conquered lands on the island of Ireland. The title was changed by the Crown of Ireland Act passed by the Irish Parliament in 1542 which we’ll discuss in part II tomorrow.