At one point Henri of Navarre had been excluded from the succession.

Catherine de’ Medici (spouse of King Henri II) had ensured her regency of the nine-year-old King Charles IX in 1560 only by making a deal with Antoine of Bourbon, who many considered had the right, as First Prince of the Blood, to be the regent.

In a kingdom that the Salic Law excluded women from succession to the throne, Catherine had overcome prejudice against government by a woman and been elected governor (gouvernante) of France with sweeping powers. However, she accepted that none of her three daughters would ever inherit the French throne. By 1572, only two of her sons remained alive, she brokered a marriage between her daughter Margaret and Henry, who that year became King Henry III of Navarre after the death of his mother, Jeanne d’Albret while she was buying clothes for the wedding in Paris. The marriage was intended to unite the interests of the house of Valois with the house of Bourbon.

Henri of Navarre always emphasised the significance of his blood, rather than religion, when he challenged the Guise-led Catholic League. After the League forced Henry III to sign the Treaty of Nemours, which excluded Navarre from the succession, in July 1585, the latter issued a manifesto condemning the pact as:

The pull of such propaganda remained so potent that even after 25 years of civil war, “many good Catholics flooded to his standard”.

Henri of Navarre’s pedigree gave him a special place of honour in the French nobility since all scions of the Bourbon line were acknowledged as the princes of the blood. As Head of the House of Bourbon, Henri was officially the First Prince of the Blood, the first nobleman of the kingdom.

At the death of Henri III, Henri of Navarre became Henri IV of France and Navarre. He was the legitimate successor designated by the Salic law, but his authority was rejected by most of Catholic France. Next in line to Henri in the throne of France was his elderly uncle Charles, Cardinal de Bourbon. The cardinal had been detained by Henri III for having been the royal candidate of the Catholic League and Spain.

The Parlement of Paris proclaimed the Cardinal de Bourbon as King Charles X of France in 1589. But despite their similar names, the French Parlement is not an equivalent of the British Parliament, which had the power to choose the king and regulate the succession. The French Parlement is a court of justice, not a sovereign legislative body.

Events favored the cause of Henri IV. He won brilliant victories at Arques and Ivry. In 1591, the Cardinal de Bourbon died. The heir presumptive of Henri IV was now the infant Henri, Prince of Condé (1588–1646) son of a Protestant prince. The remaining Bourbons supported the claim of their chief. The Catholic League were left without a plausible successor to the throne. Henri converted to Catholicism in 1593, and was anointed at Chartres the next year.

The proclamation of Charles, Cardinal de Bourbon, as King Charles X, went against the principle of primogeniture, and was therefore void. By the principle of continuity of the crown, the reign of Henri IV is dated from 1589, immediately after the death of his predecessor, and not from 1594, when he was crowned, or in 1593, when he became a Catholic. Contrary to the interpretation of the League, the late conversion of the “relapsed heretic” Henri IV was not enough to exclude him from the succession. 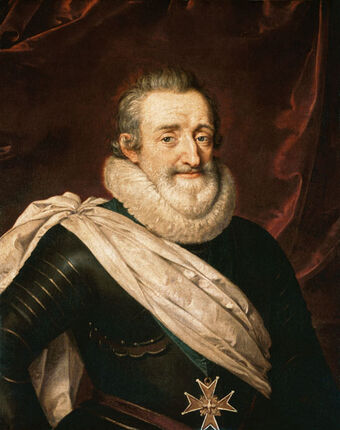 Hence, at any point in time only one person has the potential of fulfilling all the conditions of French kingship — the chief of the Capetian dynasty. His non-fulfillment of the only remaining condition, Catholicism, will not necessarily exclude him, such being contrary to the inalienability principle. By not being a Catholic, what he actually does is to delay the full acquisition of his royal powers, which would be exercised by other persons, as happened during the Protestantism of Henri IV (1589-1593).

The fundamental laws concerning the royal succession In Ancien Régime France, the laws that govern the succession to the throne are among the fundamental laws of the kingdom. They could not be ignored, nor modified, even by the king himself, since it is to these very laws to which he owes his succession. In the French monarchy, they are the foundation of any right of succession to the throne. They have developed during the early centuries of the Capetian monarchy, and were sometimes transferred to other countries linked to the dynasty.

Heredity: the French crown is hereditary. The early Capetians had their heirs crowned during their lifetime, to prevent succession disputes. The first such coronation was in favor of Robert II, in 987.

Primogeniture: the eldest son is the heir, while cadets only receive appanages to maintain their rank. This principle was strengthened in 1027, when Henry, the eldest surviving son of Robert II, was crowned despite the protests of his mother, Constance of Arles, and younger brother, Robert.

Masculinity: females are excluded from the succession. This issue was not raised until 1316, as the Capetian kings did not lack sons to succeed them for the preceding three centuries. This was invoked by Philip V of France to exclude his niece, Jeanne, daughter of his elder brother.

Male collaterality: the right of succession cannot be derived from a female line. This was invoked in 1328 by Philippe VI of France, to counter the claims of Edward III of England, making the succession exclusive to the Capetian family.

Continuity of the Crown (or immediacy of the Crown): as soon as the king dies, his successor is immediately king because “the King (the State) never dies”. Philippe III, who was in Tunis when his father died, was the first to date his reign from the death of his predecessor (1270), instead of his own coronation.

Orders made under Charles VI, in 1403 and 1407, anxious to avoid any interregnum, declared that the heir to the throne should be considered King after the death of his predecessor. But even after these decisions, Joan of Arc persisted in the old position by calling Charles VII, whose father died in 1422, the “Dauphin” until his coronation at Reims in 1429.

Inalienability of the Crown (or unavailability of the Crown): the crown is not the personal property of the king. He cannot appoint his successor, renounce the crown, or abdicate. This principle arose circa 1419, in anticipation of the Treaty of Troyes, which sought to exclude the Dauphin Charles from the succession. The succession can no longer be regulated by the king, and would rely only on the force of custom.

Catholicism: this principle was not specifically identified in the Middle Ages, but it was implied. Since the baptism of Clovis, the kings of France were Catholic. The Protestantism of Henri of Navarre led to a civil war wherein the king had to reestablish his legitimacy. In the famous Arrêt Lemaistre (1593), Parlement protected the rights of the legitimate successor, Henri of Navarre, but deferred his recognition as legitimate king, pending his conversion.

It is clear that the constitution of the fundamental laws is empirical: masculinity, Catholicity and inalienability for example, have been added or rather clarified because there is uncertainty on points considered already implied by others or by custom (as was the case for masculinity, practiced with the rule of male collaterality, in 1316 and 1328 before being formulated in 1358 and formally put into effect in 1419).

The ‘fundamental’ character of the laws was that they could be supplemented in order to clarify, but not changed, or have any or all of the basic laws ignored to change the direction of the whole. It also appears that the role of parliaments is essential in these various clarifications, the fourteenth to the eighteenth century or the nineteenth century if we add the episodes from the history of the French Capetian dynasty in 1830, 1848, 1875 and 1886.