Born Prince Charles Maximilian de Valois, third son of King Henri II of France and Catherine de’ Medici, in the royal chateau of Saint-Germain-en-Laye and styled Duke of Angoulêm from birth, he was created Duke of Orléans after the death of his older brother Louis, his parents’ second son, who had died in infancy on October 24, 1560. 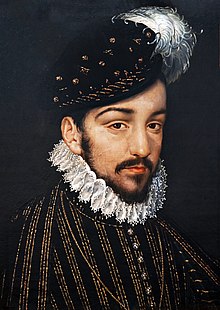 When François II died, the Privy Council appointed his mother, Catherine de’ Medici, as governor of France (gouvernante de France), with sweeping powers, at first acting as regent for her young son. On May 15, 1561, Charles IX was consecrated in the cathedral at Reims. Prince Antoine of Bourbon, himself in line to the French throne and husband to Queen Joan III of Navarre, was appointed Lieutenant-General of France. 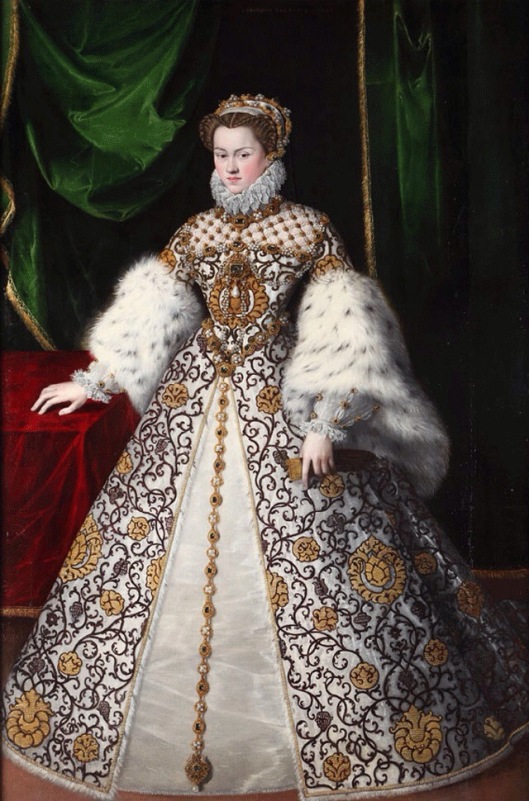 With her flawless white skin, long blond hair and perfect physique, Archduchess Elisabeth of Austria was considered one of the great beauties of the era. She was also regarded as demure, pious, and warmhearted but naive and intensely innocent because of her sheltered upbringing

After decades of tension, war broke out between Protestants and Catholics after the massacre of Vassy in 1562. In 1572, after several unsuccessful peace attempts, Charles ordered the marriage of his sister Margaret of Valois to Henri of Navarre (the future King Henri IV of France), a major Protestant nobleman in the line of succession to the French throne, in a last desperate bid to reconcile his people.

Facing popular hostility against this policy of appeasement, Charles allowed the massacre of all Huguenot leaders who gathered in Paris for the royal wedding at the instigation of his mother Catherine de’ Medici. This event, the St. Bartholomew’s Day massacre, was a significant blow to the Huguenot movement, though religious civil warfare soon began anew. Charles sought to take advantage of the disarray of the Huguenots by ordering the siege of La Rochelle, but was unable to take the Protestant stronghold.

All his decisions were influenced by his mother, a fervent Roman Catholic who initially sought peace between Catholics and Protestants but after the St. Bartholomew’s Day Massacre supported the persecution of Huguenots.

Charles died of tuberculosis in 1574, without legitimate male issue, and was succeeded by his brother as King Henri III.

Charles II of Orléans (January 22, 1522 – September 9, 1545) was the third son of François I and Claude of France. Claude was a daughter of King Louis XII of France and his wife the Duchess Regnant Anne of Brittany.

From his birth until the death of his oldest brother François, Dauphin of France (François I’s eldest son), in 1536, Charles was known as the Duke of Angoulême. After his brother’s death, he became Duke of Orléans, a titled previously held by his surviving brother Henri, who had succeeded François as Dauphin and would later become King of France as Henri II. 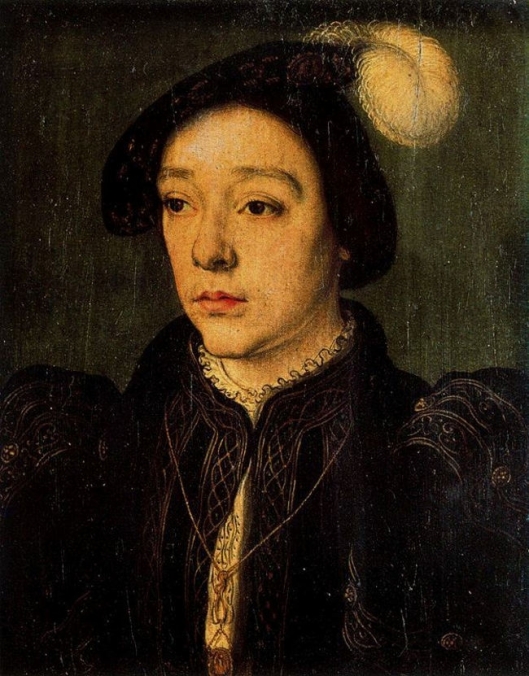 By all accounts, he was the most handsome of François I’s sons. Smallpox made him blind in one eye, but it seems that it was not noticeable. He was known for his wild antics, his practical jokes and his extravagance and frivolousness, which his father approved of wholeheartedly.

He was, by far, his father’s favorite son. In addition, he was popular with everyone at his father’s court, and it was widely believed that the French nobility of the time would have much preferred to have him as the Dauphin as opposed to his downcast brother, Henri, who never seemed to recover from his years of captivity in Spain.

In 1540 he was granted the title of Count of Clermont.

In 1542, François I and Charles V, Holy Roman Emperor, again went to war against each other. Charles fought and captured Luxembourg, but then fearful that he would miss the glory of Perpignan, which was under siege by the Dauphin Henri, he headed south. Luxembourg was lost and retaken several times during the war.

In January 1535, Henry VIII offered a betrothal between the 1-year-old Princess Elizabeth and the 12-year-old Charles on the condition that François I would persuade Pope Paul to reverse Pope Clement VII’s ruling on his marriage to Anne Boleyn as illegitimate.

However, François was reluctant to recognize Henry’s marriage to Anne because that would force him to question the Pope’s ruling. More importantly, François was worried about Elizabeth’s legitimacy despite Henry’s assurance that she was his heiress presumptive.

François stated that he would agree to the match only if Henry would agree to discontinue the annual pensions that François paid to England under the Terms of the Treaty of Amiens as part of Elizabeth’s dowry.

Henry was offended, and he stated that he had been generous in offering an heiress “of most certain title, without remainder of querel to the contrary” to a younger son. English and French commissioners met at Calais to discuss the terms of the marriage treaty, but they failed to reach a consensus because Henry insisted that Charles come to England until his marriage.

François refused to send his son to be a hostage to England. By July, the marriage negotiations came to a halt. In May 1536, Anne Boleyn was executed and Elizabeth was declared illegitimate, permanently ending any prospects of a marriage to Charles.

On September 19, 1544, the Treaty of Crépy was signed. Charles had a choice to marry one either Charles V’s daughter or paternal niece. Infanta Maria of Spain was the daughter of Emperor Charles V and Isabella of Portugal, and she would bring the Netherlands or the Low Countries of Franche-Comté as her dowry.

Archduchess Anna of Austria was the daughter of Ferdinand I, King of Hungary and Bohemia and Anna of Bohemia and Hungary, and she would bring Milan as her dowry. As the groom’s father, François I agreed to endow Charles with Angoulême, Châtellerault, Bourbon and Orléans.

The Peace of Crépy deeply offended Charles’ elder brother, the Dauphin Henri, and his wife, Catherine de’ Medici. As the heir of Valentina Visconti, Henri considered Milan to be his birthright. More importantly, this settlement would make his brother Charles as powerful as a monarch and link him by marriage to Emperor Charles V, which would divide French interests and create a strategic nightmare.

Many historians believe that Charles V hoped to use Charles as an adversary against Henri. Henri wrote a secret denunciation of the pact because it gave away three inalienable Crown properties.

On September 6, they came across a cluster of houses that had been emptied and sealed off “from the plague”—probably a form of influenza. Stating that “no son of a King of France ever died of plague”, Charles entered some of the infected houses with his brother. Laughing, he slashed at bedding with his sword and started a pillow fight with some of his traveling companions.

Stories have also been told of him (on a dare) lying down on one of the infected beds and rolling around on the bedding. Later that evening, after dining with his father and brother, he took suddenly ill, suffering from pain, a high fever, vomiting and shaking limbs. Dauphin Henri rushed to his sickroom immediately, but was barred from entering, being physically restrained on three occasions.

Charles died on September 9, 1545. Some thought that he had been poisoned, but most agreed that it was the “plague” that killed him. He is buried next to his father, François I and his brother, the Dauphin François at the Abbey of Saint-Denis.

During his funeral, the new King Henri II wept for Charles even though his friend, François de Scépeaux, argued that Charles “never loved or esteemed you.”

On the 504 anniversary of the death of Anne of Brittany I would like to begin this short series on her life and the marriages that shaped her destiny. 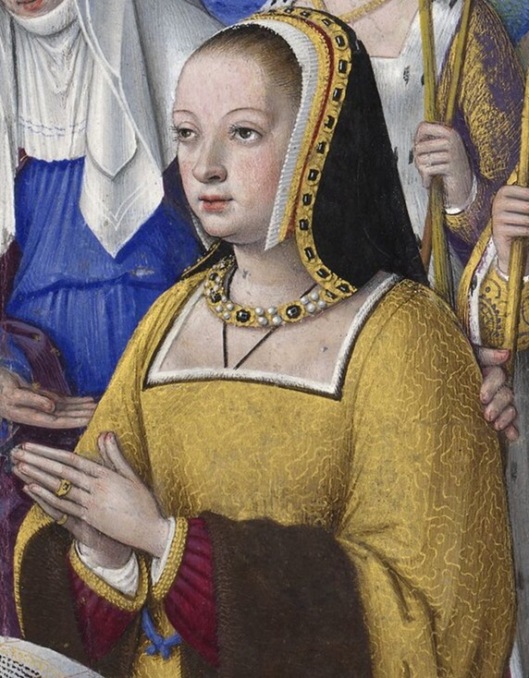 First some historical background of the Duchy of Brittany itself. The Duchy of Brittany was a independent medieval feudal state that existed between approximately 939 and 1547. Its territory covered the northwestern peninsula of Europe in what is now modern day France, bordered by the Atlantic Ocean on the west, the English Channel to the north, and less definitively by the Loire River to the south, and Normandy and other French provinces to the east. The Duchy was established after the expulsion of raiding Viking armies from the region around 939. The Duchy had a rich history and because of its strategic location was a sought after jewel for the crowns of the Kingdoms of France and England and the Duchy of Normandy. This would lead to great conflicts as Brittany struggled to maintain its independence. 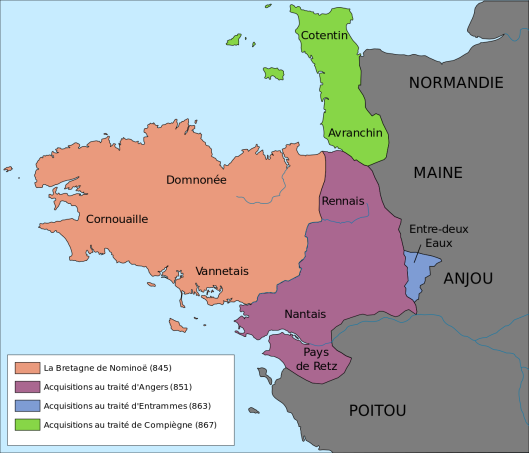 Anne was born on 25 or 26 January 1477 in the Castle of the Dukes of Brittany in the city of Nantes in what is now the Loire-Atlantique region of France, as the eldest child of Duke Francis II of Brittany and his second wife Margaret of Foix, Infanta of Navarre (herself the daughter of Queen Eleanor of Navarre [1425–1479] and of Gaston IV, Count of Foix [1425–1472]).

During this time period, the laws of succession were unclear and guided by a vague tradition rather than a strict coded law of succession. Before the Breton War of Succession the Duchy mainly adhered to the Franco-Germanic semi-Salic Law; i.e., women could inherit, but only if the male line had died out. The Treaty of Guérande in 1365, however, stated that in the absence of a male heir from the House of Montfort, the heirs of Joanna of Penthièvre would succeed. At the time of Anne’s birth, her father was the only male representative from the House of Montfort, and the Blois-Penthièvre heir was a female, Nicole of Blois, and she had sold her rights to Brittany to King Louis XI of France for the amount of 50,000 écus in 1480, leaving Anne the only viable heiress to the Duchy of Brittany.

This lack of a male heir gave rise to the threat of not only a dynastic crisis within the Duchy, but the direct possibility of the Duchy passing directly into the royal domain to be incorporated into the Kingdom of France. To avoid this, Francis II had Anne officially recognised as his heiress by the Estates of Brittany on February 10, 1486. However, the question of her marriage remained a diplomatic issue.

In 1488, the armies of Francis II were defeated at the Battle of Saint-Aubin-du-Cormier, ending the Mad War (la Guerre Folle) between Brittany and France. In the subsequent Treaty of Sablé signed on August 9, 1488 Duke Francis II was forced to accept clauses stipulating that his daughters were not to marry without the approval of the King of France. For whomever married Anne would also have a hand in governing the Duchy of Brittany and for that reason the French king wanted a say in whom she married.

The death of Francis II shortly a month after signing the treaty (September 9, 1488) as a result of a fall from his horse, Brittany was plunged into a new crisis, which lead to the final Franco-Breton war. On his deathbed, the Duke extracted a promise from Anne to never to consent to the subjugation of the Duchy to the Kingdom of France. His final act as Duke, Francis II appointed the Marshal of Rieux guardian of his daughter who was only 11 years old at the time.

The independent sovereign nature of the Duchy began to crumble upon the death of Francis II in 1488. The Duchy was inherited by his daughter, Anne, but King Charles VIII of France had his eye on the Duchy for himself.