Henri I (May 4, 1008 – August 4, 1060) was King of the Franks from 1031 to 1060. The royal demesne of France reached its smallest size during his reign, and for this reason he is often seen as emblematic of the weakness of the early Capetians.

The royal demesne, also known as the crown lands, crown estate, royal domain or (in French) domaine royal (from demesne) of France were the lands, fiefs and rights directly possessed by the kings of France.

While the term eventually came to refer to a territorial unit, the royal domain originally referred to the network of “castles, villages and estates, forests, towns, religious houses and bishoprics, and the rights of justice, tolls and taxes” effectively held by the king or under his domination.

In terms of territory, before the reign of Henri IV, the domaine royal did not encompass the entirety of the territory of the kingdom of France and for much of the Middle Ages significant portions of the kingdom were the direct possessions of other feudal lords. 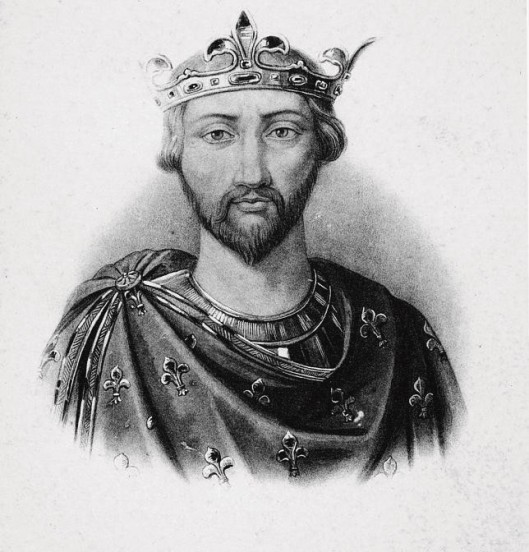 Henri I, King of the Franks

The belief that Henri I was a weak king is not entirely agreed upon, however, as other historians regard him as a strong but realistic king, who was forced to conduct a policy mindful of the limitations of the French monarchy.

Constance was married to King Robért II, after his divorce from his second wife, Bertha of Burgundy. The marriage was stormy; Bertha’s family opposed her, and Constance was despised for importing her Provençal kinfolk and customs. Robert’s friend, Hugh of Beauvais, count palatine, tried to convince the king to repudiate her in 1007. Possibly at her request 12 knights of her kinsman Fulk Nerra then murdered Beauvais in 1008.

In the early-Capetian tradition, he was crowned King of the Franks at the Cathedral of Reims on May 14, 1027, while his father still lived. He had little influence and power until he became sole ruler on his father’s death 4 years later.

The reign of Henri I, like those of his predecessors, was marked by territorial struggles. Initially, he joined his younger brother Robért, with the support of their mother, in a revolt against his father (1025). His mother, however, supported Robért as heir to the old king, on whose death Henri was left to deal with his rebel sibling. In 1032, he placated his brother by giving him the duchy of Burgundy which his father had given him in 1016.

In an early strategic move, Henri came to the rescue of his very young nephew-in-law, the newly appointed Duke William II of Normandy (who would go on to become William I the Conqueror, King of the English), to suppress a revolt by William’s vassals.

In 1047, Henri secured the dukedom for William in their decisive victory over the vassals at the Battle of Val-ès-Dunes near Caen; however, Henri would later support the barons against William until the former’s death in 1060.

In 1054, William married Matilda, the daughter of the count of Flanders, which Henri saw as a threat to his throne. In 1054, and again in August 1057, Henri invaded Normandy, but lost twice at the battles of Mortemer and Varaville.

Henri had three meetings with Heinrich III, Holy Roman Emperor—all at Ivois. In early 1043, he met him to discuss the marriage of the emperor with Agnes of Poitou, the daughter of Henri’s vassal.

In October 1048, the two King Henri I and Emperor Heinrich III met again and signed a treaty of friendship. The final meeting took place in May 1056 and concerned disputes over Theobald III and the County of Blois.

The debate over the duchy became so heated that Henri accused the emperor Heinrich III of breach of contract and subsequently left. In 1058, Henri was selling bishoprics and abbacies, ignoring the accusations of simony and tyranny by the Papal legate Cardinal Humbert.

In 1060, Henri rebuilt the Saint-Martin-des-Champs Priory just outside Paris. Despite the royal acquisition of a part of the County of Sens in 1055, the loss of Burgundy in 1032 meant that Henri I’s twenty-nine-year reign saw feudal power in France reach its pinnacle.

King Henri I died on August 4, 1060 in Vitry-en-Brie, France, and was interred in the Basilica of St Denis. He was succeeded by his son, Philippe I of Franks, and Henri’s queen Anne of Kiev ruled as regent. At the time of his death, he was besieging Thimert, which had been occupied by the Normans since 1058.

Henri I was betrothed to Matilda of Franconia (c. 1027 – 1034) was a daughter of Emperor Conrad II and Gisela of Swabia from the Salian dynasty. Matilda’s elder brother was Heinrich III, Holy Roman Emperor.

At a meeting with King Henri I in Deville in Lorraine in May 1033, Conrad agreed to marry five-year-old Matilda to the twenty-five year old King Henri. However, before she could marry, she died in early 1034. Her marriage was arranged to confirm a peace compact agreed between King Henri I and Emperor Conrad II.

She was buried in Worms Cathedral.

In 1034 King Henri then married Matilda of Frisia, the daughter of Liudolf, Margrave of Frisia, and Gertrude of Egisheim.

Around 1040, Matilda of Frisia gave birth to a daughter via Caesarian section, but four years later in 1044 both she and her daughter died only weeks apart. Matilda was buried in St Denis Abbey, but her tomb is not preserved.

Casting further afield in search of a third wife, Henri married Anne of Kiev on May 19, 1051. Anne was a daughter of Yaroslav the Wise, Grand Prince of Kiev and Prince of Novgorod, and his second wife Ingegerd Olofsdotter of Sweden. Her exact birthdate is unknown; Philippe Delorme has suggested 1027, while Andrew Gregorovich has proposed 1032, citing a mention in a Kievan chronicle of the birth of a daughter to Yaroslav in that year.

Philippe I (c.May 23, 1052 – July 29, 1108), called the Amorous, was King of the Franks from 1060 to 1108. His reign, like that of most of the early Capetians, was extraordinarily long for the time. The monarchy began a modest recovery from the low it reached in the reign of his father and he added to the royal demesne the Vexin and Bourges. 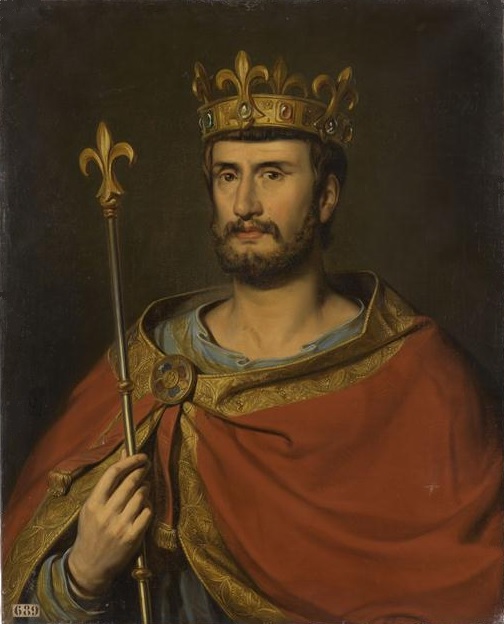 Philippe I, King of the Franks

Philippe was the eldest son of Henri I, King of the Franks and his wife Anne of Kiev, daughter of Yaroslav I the Wise, Grand Prince of Kiev, Prince of Novgorod, and his second wife Ingegerd Olofsdotter of Sweden, the daughter of Swedish King Olof Skötkonung and Estrid of the Obotrites .

Philippe was an unusual name for the time in Western Europe, his name was of Greek origin, being bestowed upon him by his mother. However, the name Philippe did become popular within the French Royal Family and France itself. Although he was crowned King of the Franks at the age of seven, until age fourteen (1066) his mother acted as regent, the first queen of the Franks (France) ever to do so. Count Baldwin V of Flanders also acted as co-regent.

Count Baldwin V of Flanders was the son of Baldwin IV of Flanders and Ogive of Luxembourg. Baldwin married Adela of the Franks daughter of King Robert II of the Franks, in 1028 in Amiens; at her instigation he rebelled against his father but in 1030 peace was sworn and the old count continued to rule until his death. The couple had three children: Baldwin VI, Count of Flanders (1030–1070) Matilda (c. 1031–1083), who was married to William the Conqueror, King of the English, and Robert I, Count of Flanders (c. 1033–1093).

Baldwin VI, Count of Flanders was married to Richilde, Countess of Hainaut (c.1018-1086) who is most likely a daughter of Reinier of Hasnon (died c.1049) and Adelheid of Egisheim.

On his deathbed in 1070, Baldwin VI left Flanders to his elder son, Arnulf III, and Hainaut to the younger son, Baldwin, with the provision that if either preceded the other in death, he would inherit the other’s county as well. Baldwin VI further entrusted Robert, his brother, with the safeguard of Arnulf III, who was still a minor, to which Robert gave his oath of homage and solemn promise to protect his nephew Arnulf. Richilde, Arnulf’s mother, was to be regent until Arnulf came of age.

Despite the oath, Robert disputed the succession of his nephew Arnulf III upon Baldwin VI’s death and entered Ghent with the intent of taking Flanders for himself. Richilde appealed to King Philippe I of the Franks who summoned Robert to appear before him.

Robert refused and continued his war with Richilde at which point Philippe I amassed an army which he brought to Flanders. Philippe’s army was accompanied by Norman troops, probably sent by Robert’s sister, Queen Matilda, and led by William FitzOsborn. William had an interest in marrying Richilde but he was killed in battle at Cassel on June 22, 1071.

In that engagement Robert’s forces were ultimately victorious but Robert himself was captured and his forces in turn captured Countess Richilde. Both were freed in exchange and the battle continued to its conclusion. Among the dead was Arnulf III, killed by Gerbod the Fleming, 1st Earl of Chester, who apparently fought for Robert. As a result of the battle Robert became the new Count of Flanders. Countess Richilde and her son Baldwin returned to Hainaut but continued to instigate hostilities against Robert.

Count Robert I of Flanders eventually gained the friendship of King Philippe I of the Franks by offering him the hand in marriage of his stepdaughter, Bertha of Holland. As a part of their negotiations Corbie, an important trade center on the border between Flanders and lesser France, was returned to royal control.

Although the marriage produced the necessary heir, Philippe fell in love with Bertrade de Montfort, the wife of Fulk IV, Count of Anjou. He repudiated Bertha (claiming she was too fat) and married Bertrade on May 15, 1092.

In 1094, he was excommunicated by Hugh of Die, for the first time; after a long silence, Pope Urban II repeated the excommunication at the Council of Clermont in November 1095. Several times the ban was lifted as Philippe promised to part with Bertrade, but he always returned to her, but in 1104 Philippe made a public penance and must have kept his involvement with Bertrade discreet.

Philippe appointed Alberic first Constable of France in 1060. A great part of his reign, like his father’s, was spent putting down revolts by his power-hungry vassals. In 1077, he made peace with William the Conqueror, who gave up attempting the conquest of Brittany. In 1082, Philippe I expanded his demesne with the annexation of the Vexin, in reprisal against Robert Curthose’s attack on William’s heir, William Rufus. Bother we’re sons of the Conqueror. Then in 1100, he took control of Bourges.

It was at the aforementioned Council of Clermont that the First Crusade was launched. Philippe at first did not personally support it because of his conflict with Urban II. Philippe’s brother Hugh of Vermandois, however, was a major participant.

Philippe died in the castle of Melun and was buried per his request at the monastery of Saint-Benoît-sur-Loire and not in St Denis among his forefathers. He was succeeded by his son, as Louis VI, King of the Franks.

Philippe’s children with Bertha were:

Philippe’s children with Bertrade were: