The next prince on my list in this examination of the name of Louis and its association with the British Royal Family is HRH Frederick-Louis, Prince of Wales, KG (February 1, 1707 – March 31, 1751). He was heir apparent to the British throne from 1727 until his death from a lung injury at the age of 44 in 1751. He was the eldest son King George II and Caroline of Ansbach, and the father of King George III.

HRH Prince Frederick-Louis, Prince of Wales and Duke of Edinburgh

Under the Act of Settlement passed by the English Parliament in 1701, Frederick-Louis was born fourth in the line of succession to the British throne, after his great-grandmother (Electress Sophia of Hanover), paternal grandfather (King George I) and father (George II). All of these relatives were alive at the time of his birth. Prince Frederick-Louis was born in Hanover, Holy Roman Empire (Germany), as Duke Friedrich-Ludwig of Brunswick-Lüneburg, His paternal great-grandmother, Sophia of Hanover, a granddaughter of James I-VI, King of England, Scotland and Ireland, was cousin and heir presumptive to Queen Anne of Great Britain. When Sophia died before Anne at age 83 in June 1714, this elevated elevated Elector George-Louis to heir-presumptive.

Queen Anne died on August 1, of that same year, and Sophia’s son became King George I. This made Frederick-Louis’s father the new Prince of Wales and first-in-line to the British throne and Frederick-Louis himself became second-in-line.

In 1726 Frederick-Louis’ grandfather, George I, created him Duke of Edinburgh, Marquess of the Isle of Ely, Earl of Eltham in the county of Kent, Viscount of Launceston in the county of Cornwall, and Baron of Snaudon in the county of Carnarvon. The latter two titles have been interpreted differently since – the ofs are omitted and Snaudon rendered as Snowdon.

Frederick-Louis spent much of his early life in Hanover even after his grandfather and father moved to England. Frederick-Louis arrived in England in 1728 as a grown man, the year after his father had become King George II. By then, George II and Caroline had had several younger children, and Frederick-Louis, created Prince of Wales January 8th 1729, was a high-spirited youth fond of drinking, gambling and women. The long separation damaged the parent-child relationship, and they would never be close.

Frederick-Louis also almost married Lady Diana Spencer, daughter of Charles Spencer, 3rd Earl of Sunderland and Lady Anne Churchill. Lady Diana was the favourite grandchild of the powerful Sarah Churchill, Duchess of Marlborough. The duchess sought a royal alliance by marrying Lady Diana to the Prince of Wales with a massive dowry of £100,000. The prince, who was in great debt, agreed to the proposal, but the plan was vetoed by Robert Walpole, Prime Minister of the day, and by King George II himself. Lady Diana instead married John Russell, 4th Duke of Bedford. 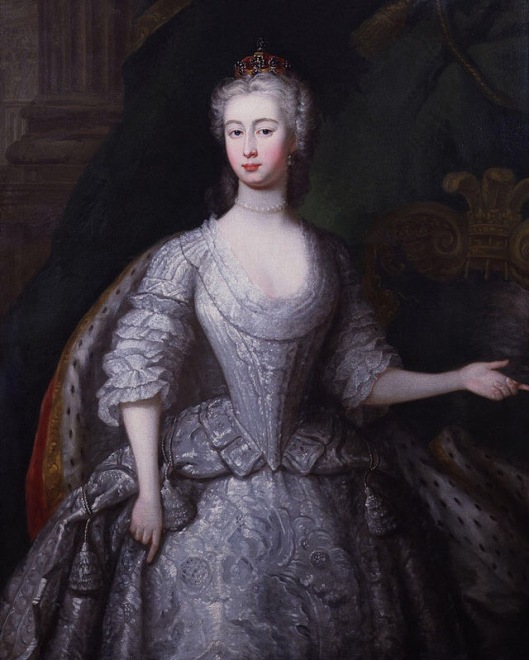 Princess Augusta of Saxe-Gotha-Altenburg HRH The Princess of Wales

When Frederick-Louis informed his mother that he considered Augusta suitable, the marriage was swiftly decided upon. Frederick-Louis simply stated that he accepted any bride his father would decide for him. His motive in seeking an early marriage was not because he’d fallen in love with Princess Augusta, his motive was to obtain an additional allowance from Parliament in order to be financially independent of his father, whom he detested.

The Prince and Princess of Wales and family

Princess Augusta did not speak French or English, and the British Court suggested that she be given language lessons before the wedding. Since British royal family was originally from Germany and since Frederick-Louis also spoke German, Princess Augusta‘s mother did not consider it necessary for her daughter to learn English. Therefore she arrived in Britain speaking virtually no English, for a wedding ceremony which took place almost immediately, on 8 May 1736, at the Chapel Royal in St James’s Palace, London.

The union was presided over by Edmund Gibson, Bishop of London and Dean of the Chapel Royal. Handel provided the new anthem ‘Sing unto God’ for the service and the wedding was also marked in London by two rival operas, Handel’s Atalanta and Porpora’s La festa d’Imeneo.
The royal couple had 9 children (5 sons and 4 daughters) with Prince George being the eldest, born 1738. Frederick-Louis died at Leicester House at the age of 44 in 1751. In the past this has been attributed to a burst lung abscess caused by a blow from a cricket or a real tennis ball, but it is now thought to have been from a pulmonary embolism. He was buried at Westminster Abbey on April 13, 1751.

Prince George inherited his father’s title of Duke of Edinburgh. George II showed more interested in his grandson and three weeks after the death of the Prince of Wales the King created George Prince of Wales, a title that is not automatically inherited.

Britain would not have a King Frederick-Louis and this was the closest they would come to a King with the name Louis.

Today I get to unite my love of cinema and royalty. A Royal Affair is a 2012 Danish production set in the 18th century at the court of King Christian VII of Denmark and the  romance between the queen, Caroline Matilda of Great Britain, and the royal physician  Johann Friedrich Struensee. The movie was directed by directed by Nikolaj Arcel and stars Mads Mikkelsen, Alicia Vikander and Mikkel Følsgaard.

HRH Princess Caroline Matilda of Great Britain, Queen of Denmark, (1751-1775) was the daughter of Frederick, Prince of Wales and Princess Augusta of Saxe-Gotha and the sister of King George III of Great Britain. She married her first cousin, King Christian VII of Denmark at the tender age of 15. The marriage was difficult and unhappy. The King did not get along with his wife and there were rumors that he was a homosexual and he also suffered from a mental illness.

As the king’s mental health deteriorated Struensee was the virtual ruler of Denmark in the name of the king and by 1770 Caroline and Struensee had become lovers. In 1771 Caroline gave birth to a daughter, Princess Louise Auguste of Denmark (1771-1843), and although officially recognized as the daughter of the king, it was widely known she was the daughter of Caroline and Struensee. After a masked ball in 1772 both Caroline and Struensee were arrested for their affair. The king and queen were divorced in April of 1772. Caroline was imprisoned and Struensee, and his accomplice, Enevold Brandt, were executed on April 28, 1772. King George III was able to obtain his sister’s release from prison and she was sent to Celle Castle in her brother’s German Electorate of Hanover. She never saw her children and died three years later from scarlet fever at the age of only 23. A sad tragic life.

I do not know when or if A Royal Affair will be released in the US but even if it is not I will have to get an all region DVD player to watch this!

Germany is a unique example in the topic of monarchy and with numbering their rulers. Unlike Britain and France and other states of Europe, Germany was slow in become a centralized nation-state. For centuries Germany was more of a geographical term than a name attached to a centralized nation state. Similar to France German history has its roots in the old Kingdom of the Franks. The Treaty of Verdun in 843 divided the Charlemagne’s empire. The eastern half of the kingdom retained the imperial title and from this entity evolved the Holy Roman Empire.

Even though Charlemagne is considered the Fist Holy Roman Emperor when he was crown Emperor on Christmas Day 800CE that state was something that developed through the centuries. I remember one historian saying that Charlemagne’s empire, thought to have reestablished the Western Roman Empire, was in reality was a state without a name. In 843 when the empire was divided the monarchs of the eastern half were titled Regnum Francorum Orientalium or Francia Orientalis: the Kingdom of the Eastern Franks. This Kingdom of East Francia lasted from 843 until 911 under the Carolingian Dynasty and the rise of the Ottonian Dynasty.

The imperial title lapsed after the death of Berengar I in 924 and would not be revived until Otto I, Duke of Saxony was crowned Emperor in 962. This is when the majority of historians believe the Holy Roman Empire began. The empire was a loose conglomeration of states with their own leaders who held titles either directly or indirectly from the emperor. The monarchy was elective but in practice it did become hereditary within certain dynasties with the election become a mere formality. The Archdukes of Austria of the Habsburg Dynasty held the title the longest. As territories merged or were annexed the rulers still held their titles and a right to sit in the imperial diet even though they no longer ruled over territory. There is not any discrepancy for the numbering of the emperors but there are some minor discrepancies and inconsistencies for the lesser states.

One of the places where there is a discrepancy in numbering is the Kingdom of Hanover. Prior to its elevation as a kingdom Hanover was an Imperial Electorate within the Holy Roman Empire ruled by a cadet line of the House of Guelph that ruled the various Brunswick duchies. In 1692 Emperor Leopold I installed Duke Ernst August of Brunswick-Lüneburg as Prince-Elector of Hanover. In 1698 Elector Ernst August was succeeded by his eldest son who became Elector Georg Ludwig of Hanover. In 1714 via the provisions of the Act of Settelment of 1701 in England and Scotland Georg Ludwig became King George I of Great Britain. In Hanover and Great Britain the numbering for these King-Electors was the same. In 1727 George I was succeeded by his son as George II and in 1760 his grandson succeeded him as George III.

In 1806 the Holy Roman Empire came to an end and Hanover became part of the Kingdom of Westphalia, a puppet state founded by Napoleon. After the defeat of Napoleon the Congress of Vienna restored George III to his Hanoverian territories and elevated Hanover to a Kingdom. Instead of starting a new numbering of as Kings of Hanover George III still retained his ordinal number. In 1820 George III was succeeded by his son who became George IV of the United Kingdom of Great Britain and Hanover. In 1837 George IV was succeeded by his brother William IV who was known as Wilhelm I of Hanover.

Since succession to Hanover was governed by the Salic Law which barred women from inheriting the throne the personal union between Great Britain and Hanover ended in 1837 with the death of William IV. William IV was succeeded in Great Britain by his niece, Victoria, who reigned in Britain until 1901 and gave her name to the entire era. In Hanover the crown went to another brother of William IV, Ernest Augustus, Duke of Cumberland.