Official announcement from the Court of Luxembourg.

“It is with great sadness that I inform you of the death of my beloved father, His Royal Highness Grand Duke Jean, who has left us in peace, surrounded by the affection of his family.”

My sympathies to his family and the people of Luxembourg….

Jean was the eldest son of Grand Duchess Charlotte and Prince Félix of Bourbon-Parma (Prince Félix was one of the 24 children of the deposed Robert I, Duke of Parma, being the duke’s sixth child and third son by his second wife, Maria Antonia of Portugal). Jean’s primary education was initially in Luxembourg, before attending Ampleforth College in England. In 1938, he was officially named Hereditary Grand Duke as heir to the throne of Luxembourg. While Luxembourg was occupied by Germans during the Second World War, the grand ducal family was abroad in exile. Jean studied at the Université Laval in Quebec City. 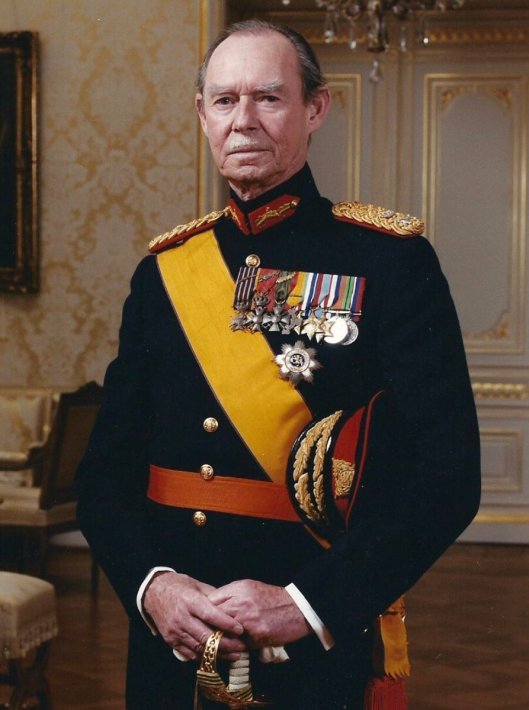 Jean later volunteered to join the British army’s Irish Guards in 1942, and after graduating from the Royal Military Academy Sandhurst, received his commission in 1943. He participated in the Normandy landings and the Battle for Caen, and joined the Allied forces in the liberation of Luxembourg. From 1984 until 2000, he was colonel of the Irish Guards.

On November 12, 1964, Grand Duchess Charlotte abdicated and Jean succeeded her as Grand Duke of Luxembourg. He then reigned for 36 years before he himself abdicated on 7 October 2000 and was succeeded by his son, Grand Duke Henri. 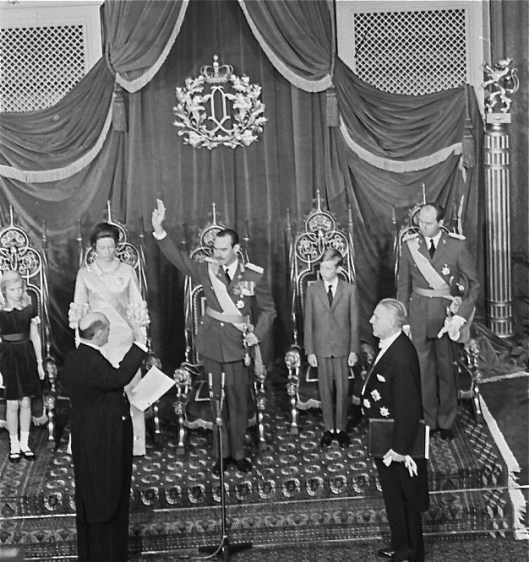 Grand Duke Jean taking the oath to the Constitution.

Between 1959-72 Grand Duke Jean was also 5th in line of succession to the defunct throne of the Duchy of Parma. At his death Jean, Grand Duke of Luxembourg was 98 years old.

On July 17, 1917 HM King George V of the United Kingdom of Great Britain and Ireland changed the name of the royal house from Saxe-Coburg-Gotha to Windsor. With World War I raging at the time there was a considerable amount of anti-German feelings in the land. For many people it didn’t seem right that the King had a German name while they were fighting a war against the German Empire In searching for a name to rechristened the royal dynasty they decided on the name Windsor, which was felt personified and the strength of the country and it also went along with the royal tradition that many European Royal Houses had of naming their dynasties after a Castle.  The original Windsor Castle was built-in the 11th century after the Norman invasion by William the Conqueror. Since the time of Henry I, it has been used by succeeding monarchs and it is the longest-occupied palace in Europe.

The royal house of the United Kingdom has been known as Windsor now for almost 100 years. Will it remain Windsor one Charles becomes king or will it change? Often when the throne passes through the female line the name of the dynasty will change to reflect the patrilineal descent of the new monarch. This has been the case for the majority of royal houses in Europe although there are  exceptions. Some claim that the changing the name of dynasties was the invention of modern historians and that during some of these time periods dynastic names were not consistently used. Even with the kings and queens of England dynastic name changes have not always been consistent. For example, King Stephen was technically a member of the House of Blois but most historians and text books place him as a member of the House of Normandy. The same case happens with William III. Most books place him as a member of the House of Stuart yet he was, in the male line, a member of the Dutch House of Orange.

From a Genelaogically perspective, Elizabeth II is a member of the Wettin Dynasty from the collateral branch of the House of Saxe-Coburg-Gotha line via her descent from Prince Albert, the consort of Queen Victoria. Her husband, Prince Philip, Duke of Edinburgh, is a member of the House of Schleswig-Holstein-Sonderburg-Glücksburg. This makes The Prince of Wales and the Duke of Cambridge and his future offsprings members of that dynasty. This is all from a genealogical aspect of course because technically they are members of the House of Windsor. The House of Glücksburg itself is a collateral branch of the House of Oldenburg. The Oldenburg dynasty has ruled in Denmark, Russia, Greece, Norway, Schleswig, Holstein, Oldenburg and Sweden. The question now becomes will the name of the royal house change when Charles succeeds to the throne?

There has been no indication either way that it will change or that it will not change. In times past this would not have been an issue and the name of the royal house would automatically change once the Crown passed through the female line to reflect the patrilineal line. With the name Windsor the British monarchy has a name that does not have foreign roots like many of the former British royal houses had. This trend, of adopting or keeping nationalistic names for European Monarchies has become the new tradition. Many extant monarchies have chosen to keep the dynastic name even when passing through the female line. For example, in the Netherlands the dynastic name of the royal family is Orange-Nassau despite passing through the female line in the last three generations. Even further back in time Austria kept the Habsburg name even though the last male line Habsburg, Holy Roman Emperor Charles VI, died in 1740. In Russia the name of Romanov was kept even though the last male line Romanov died with the death of Emperor Peter II in 1730.

The dynasty that replaced the Romanov’s were the House of Holstein-Gottorp a collateral branch of the House of Oldenburg, but because Romanov was the name so associated with the Russian royal family it was decided to retain the name. In Belgium and Luxembourg they also have distanced themselves from their dynastic titles. In 1986, former Grand Duke Jean of Luxembourg, dropped the dynastic title of the House of Bourbon-Parma, because the head of that house, Duke Carlo-Hugo of Bourbon Parma deemed that Jean’s son, the current Grand Duke Henri, had entered into an unequal marriage. In 1921 King Albert I of Belgium dropped the House of Saxe-Coburg-Gotha dynastic name for the same reasons George V did. Today the Belgian royal family is simply known as being “of Belgium.”

With Britain now having a gender neutral succession it seems wise to just retain the name of Windsor for the name of the royal family even though it may, or will, pass through the female line many times in the future. With such a proud British (or specifically English) name such as Windsor attached to the royal family this association would be lost by changing it to the House of Glücksburg. It would once again be placing the family name under something foreign and not British or English. Some have theorized that a future Charles III could hyphenate Windsor with Mountbatten, something the queen herself decreed in 1961 for all their descendants who did not hold a royal title, or Charles III could call the royal house the House of Mountbatten or even the House Edinburgh. However, none of those scenarios seem likely.

Hopefully this all doesn’t sound xenophobic. My intent was to demonstrate that since the political atmosphere has changed over the centuries when royal families ruled over many different nation-states, and that the modern monarchy is more nationalistic, it makes great sense to abandon that old practice of renaming the royal dynasty when it passed through the female line and to retain a name that reflects and honors the people who the royal family serves.

With the abdication announcement from Queen Beatrix of the Netherlands earlier this week I began to look at the history and tradition of abdication within all monarchies, not just the Netherlands. I grabbed a note-book and began listing the Emperors, Empresses, Kings and Queens etc, that have abdicated through the centuries. Wow, there were many more than I realized. Too many to mention in this blog post. One thing I have noticed is that there were many forced abdication in the past centuries and few voluntary abdication. Holy Roman Emperor Charles V, King of Spain is an example of a voluntary abdication. In the past, abdication were overwhelmingly done for political and not personal reasons.

For a few years Queen Christina of Sweden (1632-1654) desired to abdicate citing she wanted to rest and she was tired of being pressured into marriage. At first her councilors objected but in 1654 she abdicated in favor of her cousin who became King Carl X Gustaf of Sweden. Health problems, in the form of gout, moved Holy Roman Emperor Charles V to abdicate his thrones. He gave spain to his son who became Felipe II of Spain and the Holy Roman Empire went to his brother Ferdinand.

These are a couple of examples of voluntary abdication. Often monarchs have abdicated because they had little choice. Emperor Nicholas II of Russia is a prime example. His country was in shambles because of World War I and he was not popular and with the rise of the provisional government his abdication was essential for a smooth transition. His cousin, German Emperor Wilhelm II (1888-1918) refused to abdicate the throne as his empire was crumbling at his feet. His Imperial Chancellor, Prince Maximilian of Baden, announced the Emperor’s abdication for him, which outraged the Emperor. Wilhelm II eventually signed abdication papers weeks later after he was in exile.

I see the abdication of King Edward VIII of the United Kingdom of Great Britain and Northern Ireland as a semi-voluntary choice. Yes, he had a choice and as we all know he chose to abdicate to be with the woman he loved. He lived in a time were marrying an American who was twice divorced was socially unacceptable. He did have a choice but one that really wasn’t fair in my opinion.

It was in the 20th century where monarchies began to see abdication by voluntary means. Luxembourg has a tradition of abdication that began with the abdication of Marie-Adélaïde, Grand Duchess of Luxembourg in 1919. Marie-Adélaïde’s abdication to her younger sister Charlotte was not voluntary. It was due to political pressure resulting from her cordial relationship with the Germans that occupied Luxembourg during World War I. In 1964 her sister, Grand Duchess Charlotte voluntarily abdicated to her son Jean. In 2000 Grand Duke Jean abdicated the throne in favor of Henri, Luxembourg’s reigning Grand Duke.

In Britain Elizabeth II will never abdicate. The abdication crisis left a sour taste in her mouth and her coronation oath and her dedication to duty will not leave abdication as an option. This is the case for most of the remaining monarchies of Europe. Next week I want to look more in-depth at the Kingdom of the Netherlands where a tradition of abdication has developed. I also want to look at the pros and cons of abdication itself.