Fernando was the eldest surviving son of Carlos IV of Spain and Maria Luisa of Parma. In his youth Fernando occupied the position of an heir apparent who was excluded from all share in government by his parents and their favourite advisor and Prime Minister, Manuel Godoy.

Following a popular riot at Aranjuez Carlos IV abdicated in March 1808. Fernando ascended the throne as Fernando VII and turned to Napoleon for support. He abdicated on May 6, 1808 under pressure by Napoleon who wanted to install his brother, Joseph, as King of Spain. Thereafter Napoleon kept Fernando under guard in France for six years at the Château de Valençay.

While the upper echelons of the Spanish government accepted his abdication and Napoleon’s choice of his brother Joseph Bonaparte as king of Spain, the Spanish people did not. Uprisings broke out throughout the country, marking the beginning of the Peninsular War.

After the Battle of Bailén proved that the Spanish could resist the French, the Council of Castile reversed itself and declared null and void the abdications of Bayonne on August 11, 1808. On August 24, Fernando VII was proclaimed King of Spain again.

Despite being reinstated as King Fernando remained in French custody. During Fernando VII’s exile in France a new Constitution was rattified.

The Political Constitution of the Spanish Monarchy.

The Constitution was ratified on March 19, 1812 by the Cortes of Cádiz, the first Spanish legislature that included delegates from the entire nation, including Spanish America and the Philippines. “It defined Spanish and Spanish American liberalism for the early 19th century.”

With the notable exception of proclaiming Roman Catholicism as the official and sole legal religion in Spain, the constitution was one of the most liberal of its time.

Five years later after experiencing serious setbacks on many fronts, Napoleon agreed to acknowledge Fernando VII as king of Spain on December 11, 1813 and signed the Treaty of Valençay, so that the king could return to Spain.

Fernando VII soon found that in the intervening years a new world had been born of foreign invasion and domestic revolution. Spain was no longer the absolute monarchy he had relinquished six years earlier. Instead he was now asked to rule under the liberal Constitution of 1812. Before being allowed to enter Spanish soil, Ferdinand had to guarantee the liberals that he would govern on the basis of the Constitution, but, only gave lukewarm indications he would do so.

During the process of his return to SpaIn Fernando VII was encouraged by conservatives and the Church hierarchy to reject the Constitution. On May 4, he ordered its abolition and on May 10, had the liberal leaders responsible for the Constitution arrested.

Fernando VII justified his actions by claiming that the Constitution had been made by a Cortes illegally assembled in his absence, without his consent and without the traditional form.

Fernando VII ruled as an absolute monarch for the rest of his reign, although initially promised to convene a traditional Cortes, but never did so, thereby reasserting the Bourbon doctrine that sovereign authority resided in his person only.

Caroline of Bourbon-Parma, Duke of Parma, Ferdinand VII of Spain, Kingdom of Spain, Maria-Joseph of Saxony, Maximilian of Saxony, Pope Pius VII, Queen consort of Spain, the Kingdom of the Two Sicilies

Maria-Josepha of Saxony was the daughter of Hereditary Prince Maximilian of Saxony (1759-1838) a German prince and a member of the House of Wettin. He was the sixth but third and youngest surviving son of Friedrich-Christian, Elector of Saxony (1722-1763)and the composer Princess Maria-Antonia of Bavaria (1724-1780). 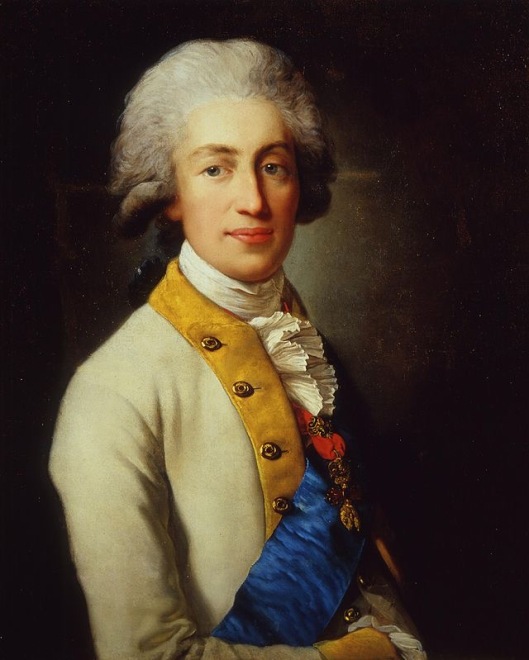 Maria-Josepha of Saxony’s paternal grandmother was Princess Maria-Antonia of Bavaria who was born at Nymphenburg Palace in Munich to Elector Charles-Albert of Bavaria, later Emperor Charles VII, (1697-1745) and Archduchess Maria-Amalia of Austria (1701-1756). Throughout her life she received an outstanding education, particularly in the arts (including painting, writing poetry, as well as music).

Princess Carolina of Bourbon-Parma’s full baptismal name was Carolina Maria Teresa Giuseppa. She was named after her godparents, her paternal great-uncle King Carlos III of Spain and her maternal grandmother Empress Maria-Theresa.

Born Princess Maria-Josepha of Saxony, she lost her mother when she was a few months old, so her father sent her to a convent near the Elbe river, where she was raised by the nuns. As a result, Maria-Josepha had a strict religious upbringing and was a fervent Roman Catholic all her life. At birth she was entitled to the style of Serene Highness as Saxony remained an electorate until 1806. After Saxony became a kingdom she was entitled to the style of Royal Highness.

King Fernando VII of Spain’s second wife, Maria Isabel of Portugal, died in 1818 without leaving any descendants. Thus the King began to look for a new consort and his choice fell on Maria-Josepha. They married on October 20, 1819 in Madrid. King Fernando VII was 35 and Maria-Josepha was 16 years old. 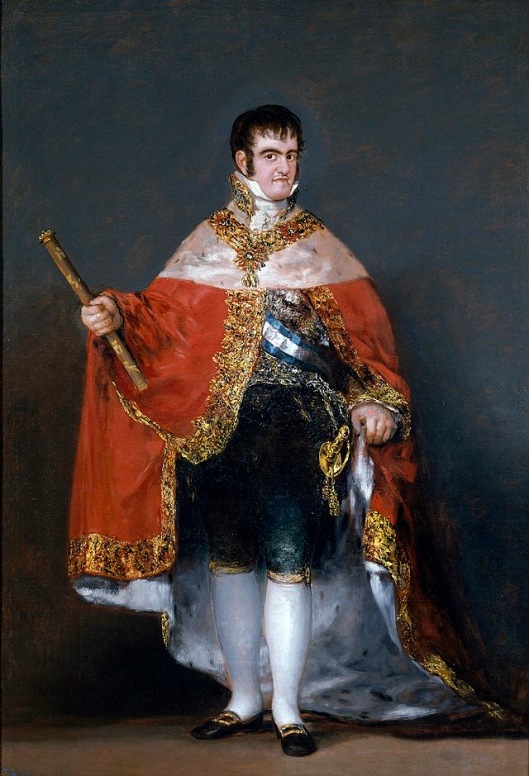 Although the new queen was too young, naive and inexperienced, the king fell in love with her because of her sweet temper. Also, she was considered more attractive than his previous wives, Maria-Antonia of Naples and Sicily (later the Two-Sicilies) and Maria-Isabella of Portugal. 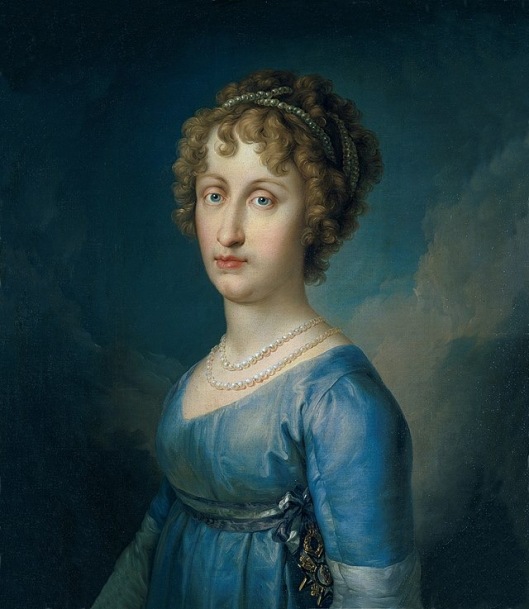 Maria-Antonia of Naples and Sicily, first wife of Fernando VII of Spain 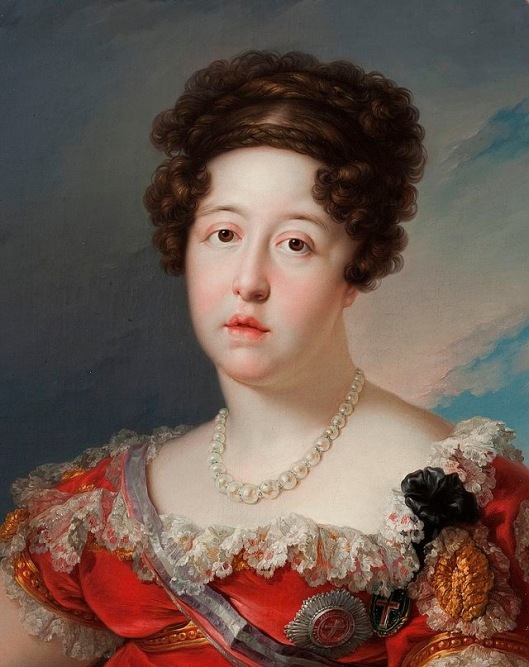 Maria-Isabella of Portugal, second wife of Fernando VII of Spain

After his two childless marriages, there was great pressure for the Bourbon dynasty in Spain to ensure that King Fernando VII had an heir. Saxon princesses were renowned for their fertility since Maria-Josepha-Amalia and Fernando VII’s common ancestors Augustus III of Poland and Archduchess Maria-Josepha of Austria had had some fourteen children, including Fernando VII’s grandmother, Maria Amalia of Saxony, and Maria-Josepha’s grandfather, Friedrich-Christian, Elector of Saxony.

Nevertheless, the marriage remained childless and Maria-Josepha withdrew from public life, with long stays in the Palace of Aranjuez, in La Granja de San Ildefonso and the Royal Palace of Riofrio. It took a personal letter sent by Pope Pius VII in order to convince the queen that sexual relations between spouses were not contrary to the morality of Catholicism.

She died as a result of fevers on May 18, 1829 in Aranjuez, leaving her husband heartbroken, and was buried in El Escorial. Her husband remarried for the fourth time to his niece, Maria-Christina of the Two Sicilies who eventually gave birth to the future Queen Isabella II of Spain.

In Britain, as I mentioned last week, the name John is not a favorable name. In Spain the name Juan may be a little controversial in the future. The present king, Juan-Carlos, chose the double name instead of Juan III, in deference to his father Don Juan, Count of Barcelona. Don Juan was the heir to his father King Alfonso XIII but was bypassed for the throne by Francisco Franco for being too liberal. Instead Franco chose Juan-Carlos, the eldest son of the Count of Barcelona, as the heir to the Spanish throne. This did cause some breakdown in the relationship between Juan-Carlos and his father. The Count of Barcelona had a difficult time letting go of his place in the succession. Don Juan formally renounced his rights to the Crown eight years after being displaced as recognised heir to the throne by Franco, and two years after his son Don Juan Carlos had become king. In return, his son officially granted him the title of Count of Barcelona, which he had claimed for so long.

There were many monarchists who saw Don Juan as the rightful king. Had he reigned as king he would have been King Juan III. When the count of Barcelona died on April 1, 1993 he was treated as if he had been a reigning monarch and was buried as Juan III with honours and trappings due a king, in the Royal Crypt of the monastery of San Lorenzo del Escorial, near Madrid. Although this doesn’t negate the fact that a king may rule in Spain with the name Juan, the question would be will he rule as Juan III or as Juan IV? Even though Juan III was a nominal king and never actually reigned, I feel they will follow the usual Bourbon tradition of recognizing nominal rulers. In France Prince Louis Stanislas Xavier de Bourbon ruled as King Louis XVIII despite the fact that his nephew, Louis XVII, never actually ruled France.

The Count of Barcelona’s father, King Alfonso XIII, bore a name that may no longer be popular for a Spanish monarch. Alfonso XIII lost his throne in the unrest in Spain in the 1930s. In 1923 General Miguel Primo de Rivera took control of the government in a coup with the support of King Alfonso XIII. Rivera was very unpopular in Spain and in 1931 after some economic upheavals when he was told the army no longer supported him, he fled the country. A few weeks later the king also left the country as he had become the symbol for all that was wrong in Spain at the time. Alfonso XIII never abdicated and the Second Spanish Republic was proclaimed after he left. He eventually abdicated in 1941 shortly before his death in 1941, leaving the throne to Don Juan, Count of Barcelona. However, when Franco restored the monarchy in 1947 he chose the option of naming a successor later. Instead of the Count of Barcelona he chose the count’s son. Spain’s current king, Juan Carlos. Because of his actions with Rivera and the news that he was a bit of a womanizer has left the name Alfonso an unlikely choice in the near future.

Another name that may not be used for a long time is Fernando. The last king by that name, Fernando VII, was king during the Napoleonic wars. In March of 1808 King Carlos IV of Spain was forced to abdicate and by May of that Year his son and successor, Fernando VII, was forced to turn Spain over to Napoleon who placed his own brother, Joseph, onto the Spanish throne. When Joseph’s rule began falling apart in 1813 Napoleon was forced to recognize Fernando VII as king once again. Upon his restoration he abolished the liberal Constitution of 1812 and restoring the monarchy to an absolutist form. He died in 1833 and prior to his death had overturned the Salic Law which King Felipe V had instituted when the Bourbons came to power in Spain. The Salic Law barred women from inheriting the throne or passing on claims of succession. With the law overturned this allowed Fernando’s daughter, Isabel, to rule as queen of Spain in her own right. This angered the kings brother, Carlos, Duke of Madrid, who would have succeeded him. By not accepting this verdict the Duke of Madrid plunged Spain into a series of Civil Wars known as the Carlist’s Wars. This war lasted for several generations.

In 1868 and unpopular Isabel II also abdicated and her name, along with that of her fathers, may not be used again for a long long time as the name of another reigning monarch.