From the Emperor’s Desk: Yesterday I wrote about Charles the Bald, Emperor of the Carolingian Empire, King of Italy and King of West Francia. In the past I’ve written about the subject of the ordinal numbers of the French Kings and I would like to touch on this topic once again.

The numbering of early Frankish Kings can be confusing and even inaccurate. Thus is the case with Charles the Bald. 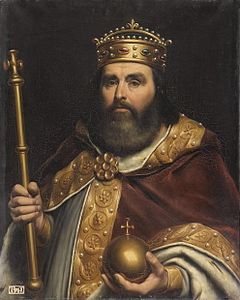 In the early days of both the Holy Roman Empire and the kingdom of France many kings and emperors would rule at various places within the empire. With many monarchs going by the names of Louis or Charles and with them ruling an Empire that was constantly being divided it has caused confusion about what ordinal numbers they have.

What complicates the matter even further is how to reference or count Charlemagne, King of the Franks and Emperor of the Romans, the Father of Europe and the one who started it all.

The name Charlemagne, which the emperor is normally known in English, comes from the French Charles-le-magne, meaning “Charles the Great”. His given name was simply Charles (Latin Carolus, Old High German Karlus, Romance Karlo). He was named after his grandfather, Charles Martel, a choice which intentionally marked him as Martel’s true heir.

The nickname magnus (great) may have been associated with him already in his lifetime, but this is not certain. The contemporary Latin Royal Frankish Annals routinely call him Carolus magnus rex, “Charles the great king”. As a nickname, it is only certainly attested in the works of the Poeta Saxo around 900 and it only became standard in all the lands of his former empire around 1000.

Charlemagne is often listed as Charlemagne instead of Charles the Great without an ordinal. However, in the realms that eventually evolved into the Kingdom of France and the Holy Roman Empire, Charlemagne is counted as Holy Roman Emperor Charles I; but it is France where the name and number (or lack thereof) is problematic.

What continues to complicate the matter is that those who count Charles the Bald as Charles I of France, instead of Charlemagne, use the 843 Treaty of Verdun as the starting point for the numbering of the French kings. 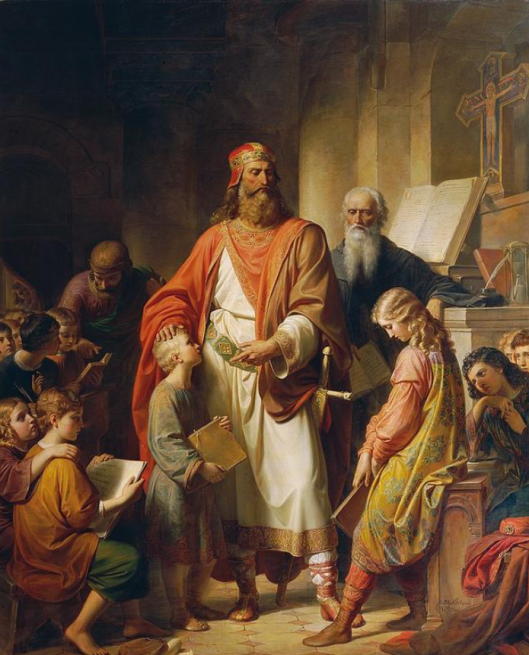 After Charles III the Simple, King of West Francia, there would not be another King of France by that name until 1322 a full 400 years later! Even then Charles IV was known contemporarily by his sobriquet as Charles the Fair.

On this day in history: February 12, 881. Charles III “The Fat” was Crowned Emperor by Pope John VIII. 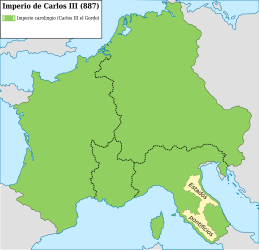 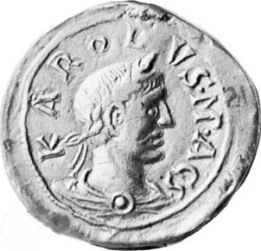 The youngest son of Louis the German and Hemma, Charles was a great-grandson of Charlemagne (Charles the Great) He was the second-last emperor of the Carolingian dynasty and the last to rule, briefly, over a re-united Frankish empire.

Over his lifetime, Charles became ruler of the various kingdoms of Charlemagne’s former Empire. Granted lordship over Alamannia in 876, following the division of East Francia, he succeeded to the Italian throne upon the abdication of his older brother Carloman of Bavaria who had been incapacitated by a stroke. Crowned Emperor in 881 by Pope John VIII, his succession to the territories of his brother Louis the Younger (Saxony and Bavaria) the following year reunited the kingdom of East Francia. Upon the death of his cousin Carloman II in 884, he inherited all of West Francia, thus reuniting the entire Carolingian Empire.

The nickname “Charles the Fat” (Latin Carolus Crassus) is not contemporary. It was first used by the Annalista Saxo (the anonymous “Saxon Annalist”) in the twelfth century. There is no contemporary reference to Charles’s physical size, but the nickname has stuck and is the common name in most modern European languages (French Charles le Gros, German Karl der Dicke, Italian Carlo il Grosso).

His numeral is roughly contemporary. Regino of Prüm, a contemporary of Charles’s recording his death, calls him “Emperor Charles, third of that name and dignity” (Latin Carolus imperator, tertius huius nominis et dignitatis).

On July 18, 880, Pope John VIII sent a letter to Guy II of Spoleto seeking peace, but the duke ignored him and invaded the Papal States. John responded by begging the aid of Charles in his capacity as King of Italy and crowned Charles Emperor on February 12, 881. This was accompanied by hopes of a general revival in western Europe, but Charles proved to be unequal to the task. Charles did little to help against Guy II. Papal letters as late as November were still petitioning Charles for action.