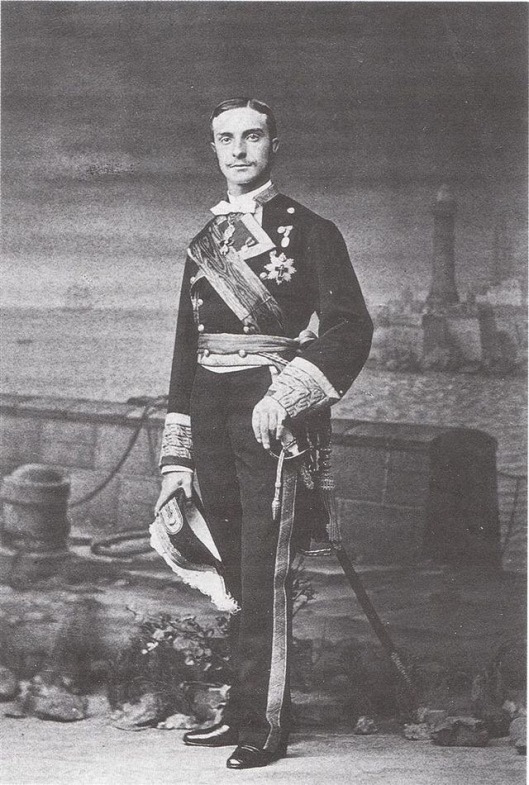 In examining his maternal great-grandparents we find these same four individuals:

The difference of course is in who their children were and whom they were married to. For example, paternally Carlos IV of Spain and Maria Luisa of Parma had Infante Francisco de Paula, Duke of Cádiz who married his niece Princess Luisa Carlotta of the Two Sicilies daughter of Francesco I of the Two Sicilies and Maria Isabel of Spain.

However, on Alfonso XII’s maternal side, Carlos IV of Spain and Maria Luisa of Parma had King Fernando VII of Spain who married, as his fourth wife his, niece Maria Christina of the Two Sicilies, (her mother wife, Maria Isabella of Spain’s older brother). 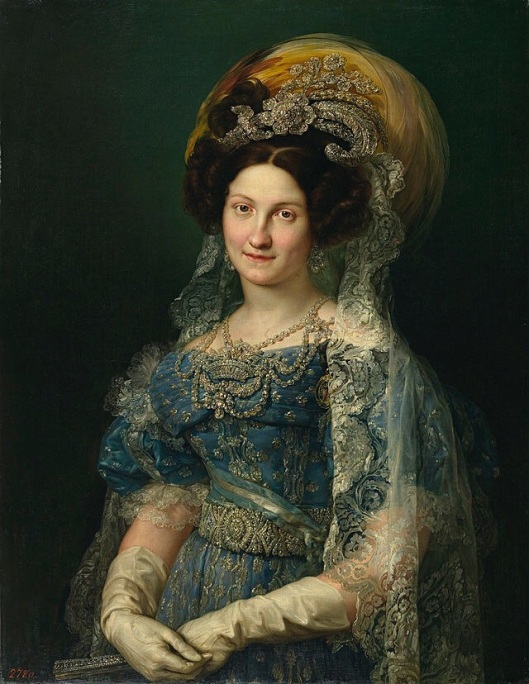 Francisco married Queen Isabella II of Spain, his double first cousin, on October 10, 1846. There is evidence that Isabella would rather have married his younger brother, Infante Enrique, Duke of Seville, and complained bitterly about her husband’s effeminate habits after their first night together. 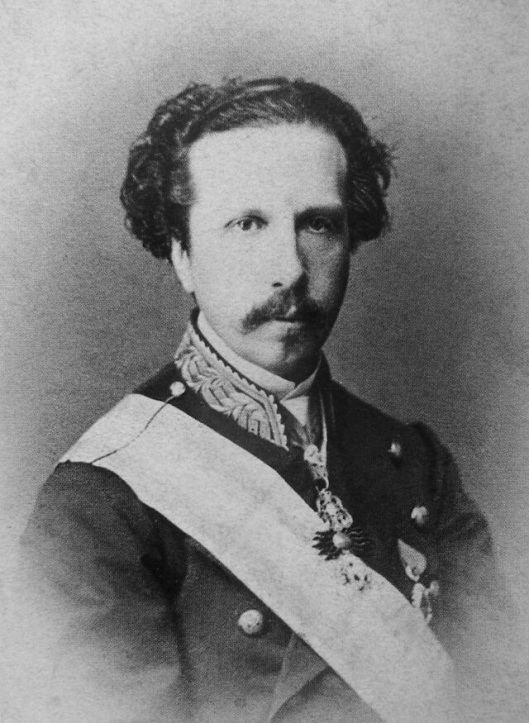 Alfonso XII’s maternal grandparents (his maternal side is where he derived his claim to the throne) were King Fernando VII of Spain Maria Christina of the Two Sicilies and they were the parents of his mother, Queen Isabella II of Spain.

Isabella II, was Queen of Spain from 1833 until 1868. She came to the throne as an infant, but her succession was disputed by the Carlists, whose refusal to recognize a female sovereign led to the Carlist Wars. After a troubled reign, she was deposed in the Glorious Revolution of 1868, and formally abdicated in 1870. Her son, Alfonso XII, became king in 1874. 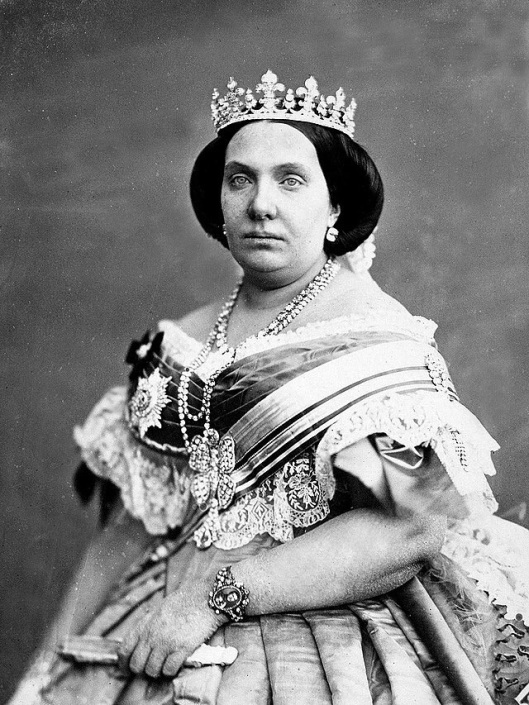 Isabella II, was Queen of Spain

With Alfonso XII being the result of multiple first cousin marriages and two uncle-niece unions, he should have been as inbred as his predecessor King Carlos II of Spain. The fact that Alfonso XII did not suffer from the curse of inbreeding like Carlos II has given rise to the speculation that Infante Francisco de Asís, Duke of Cádiz was not the real father of King Alfonso XII. That will be the topic of the next post on the lineage of King Alfonso XII.

Alfonso XII of Spain, Charles III of Spain, Ferdinand IV of Naples and Sicily, Francis I of the Two Sicilies, House of Bourbon, Kingdom of Spain, María Isabel of Spain, Maria Louisa of Parma, Philip V of Spain, Spain

I did a post many years ago about the lineage of Carlos II of Spain and how inbreeding resulted in his physical and mental state. Unable to father any children with his two wives, this resulted in the Spanish Habsburg Dynasty being replaced by a branch of the French Bourbon Dynasty, with Philippe, Duke of Anjou, a grandson of King Louis XIV of France (also a great grandson of Felipe IV of Spain) who became the first Spanish king of the House of Bourbon as King Felipe V. Felipe V’s accession provoked the 13-year War of the Spanish Succession, which continued until the Treaty of Utrecht forbade any future possibility of unifying the French and Spanish crowns while confirming his accession to the throne of Spain. 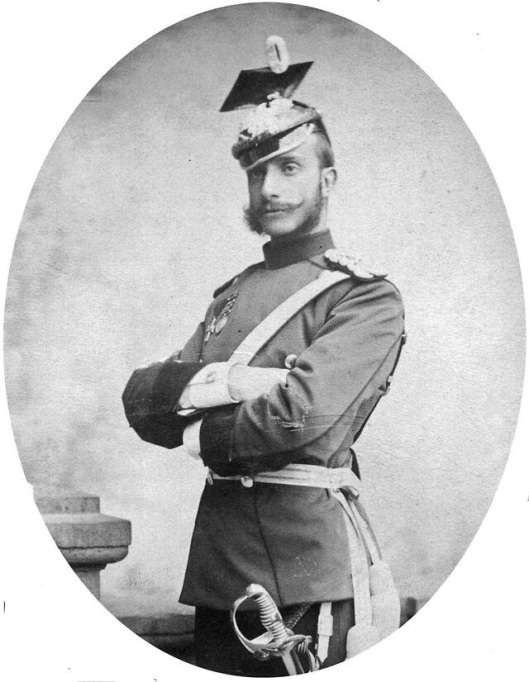 Although the Spanish Bourbons didn’t intermarry at first, once this branch obtained the Kingdom of Naples and Sicily (later the Kingdom of the Two Sicilies) and the Duchy of Parma, along with Spain, they then began inbreeding at an alarming rate.

One of the members of the Spanish Bourbons who seems to be as inbred as Carlos II was King Alfonso XII of Spain. If you look at Alfonso XII’s official genealogy it’s very startling. Most of us commoners have eight unrelated great-grandparents. Alfonso XII only had four great-grandparents, and even then they were all from the House of Bourbon. Let’s dissect this. 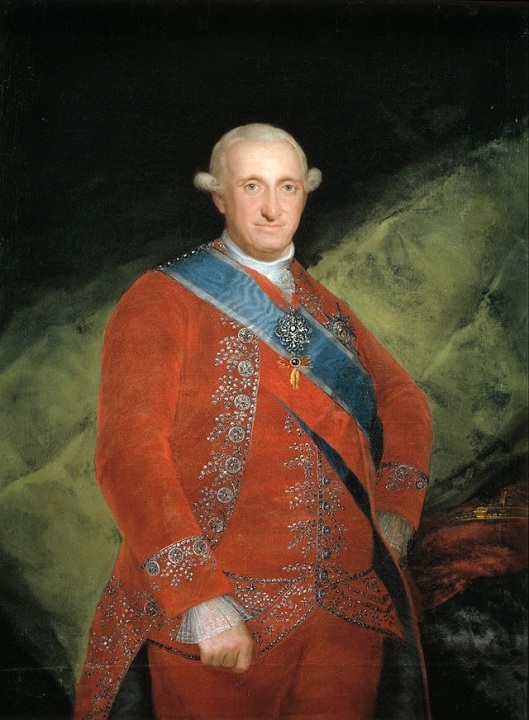 Carlos IV and Maria Louisa had three children that were ancestors of Alfonso XII. The only one we’re concerned with at this moment is Infante Francisco de Paula of Spain, their youngest son.

Carlos III was granted the kingdoms of Naples and Sicily after his father, Felipe V conquered the two kingdoms in 1734. His elder half-brother, Fernando VI of Spain, died in 1759 without an heir so Carlos succeeded as King of Spain. Naples and Sicily went to his second son, Infante Ferdinand, and Carlos III’s eldest son became Carlos IV of Spain. On March 8, 1816 Ferdinand merged the thrones of Sicily and Naples into the Kingdom of the Two Sicilies. This created the Bourbon-Two Siclies branch of the Spanish Bourbons.

Francesco I of the Two Sicilies and his first cousin María Isabel of Spain, the youngest daughter of King Carlos IV of Spain and his wife Maria Luisa of Parma. had many children and the one that concerns us here at this moment is Infanta Louisa Carlotta, Princess of the Two Sicilies. 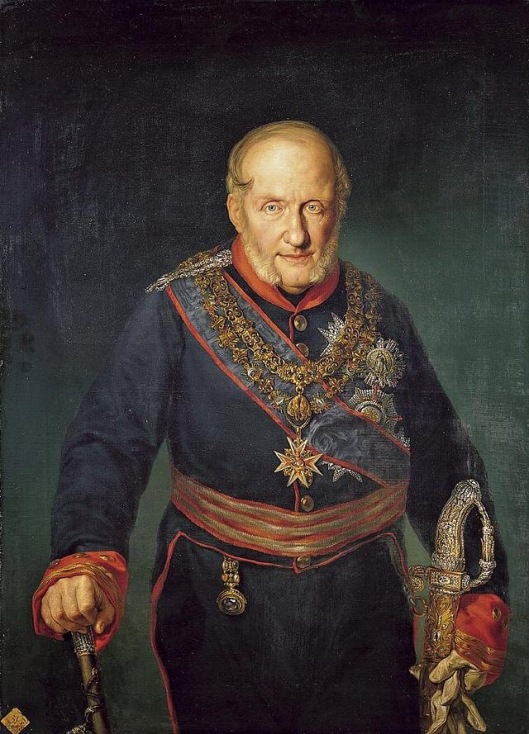 Francesco I of the Two Sicilies 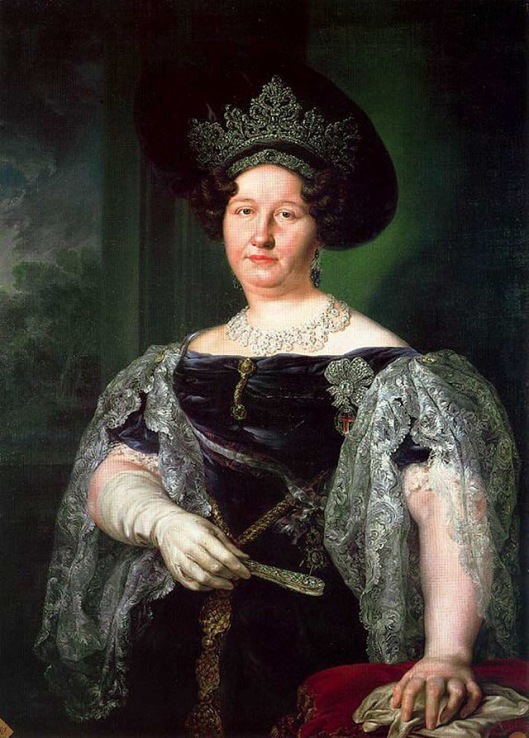 Below is a simplified chart of his paternal ancestry. 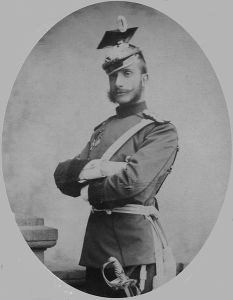 One of the more notable royals with questionable parentage was King Alfonso XII of Spain. Alfonso was born in Madrid as the eldest son of Queen Isabella II. Officially, his father was her husband, Infante Francisco de Bourbon, Duke of Cadiz. The Duke of Cadiz was given the title of King Consort, one of the few in history, upon his marriage to his double first cousin, Queen Isabella II of Spain, on October 10, 1846. There is evidence that Isabella desired to marry the Duke of Cadiz’ younger brother, Infante Enrique de Bourbon, Duke of Seville. Shortly after their wedding night Queen Isabella II bitterly complained about her husband’s effeminate habits and mannerisms.

These facts had lead to considerable speculation that some or all of Isabella’s children were not fathered by Francisco; this speculation has been bolstered by rumors that Francisco was either homosexual or physically unable to complete the sex act. With Alfonso XII’s biological paternity uncertain, there has been speculation that his biological father may have been Enrique Puigmoltó y Mayans (a captain of the guard). This rumor was put forth by the Carlists as part of their propaganda against the queen.

Let provide some background on Carlism. In 1701 the French Bourbon prince, Philippe, Duc d’Anjou, grandson of France’s king, Louis XIV, inherited the Spanish throne. What the new King Felipe V brought with him to Spain was the ancient Salic Law which barred woman from inheriting the throne as well as passing along succession rights. This law was foreign to the Spaniards because there had been many queen regnants in Spain prior to the accession of the House of Bourbon. This law was not tested in Spain because between the reigns of Felipe V and Fernando VII each monarch successfully produced a male heir.

King Fernando VII, despite multiple marriages, had not fathered a male heir and this lead to a succession crisis in 1833 with the Salic Law being rescinded in Spain. In 1827 King Fernando VII’s third wife, Maria Josepha Amalia of Saxony, died. This forced the aging king into a hasty fourth marriage in order to father a male heir. His bride was Maria Christina of Bourbon-Two Sicilies. The awkwardness of this union was that not only were they cousins multiple times over, King Fernando VII was also her uncle by both birth and marriage. Maria Christina’s mother, Infanta Maria Isabella of Spain, was King Fernando VII’s sister; both were born to King Carlos IV of Spain and his wife, Maria Luisa of Bourbon-Parma. Fernando VII did, however, have two daughters, with Infanta Isabella being the eldest and Infanta Luisa Fernanda being the youngest.

When Fernando VII lay dying his queen had him set aside the Salic Law, which thus made their young daughter succeed him as Queen Isabella II upon his death. Under the old Salic Law the late King Fernando VII’s brother, Don Carlos, Duke of Molina, was heir to the throne instead of any female. Don Carlos revolted and proclaimed he was the legitimate and rightful king and styled himself King Carlos V of Spain. Needing support, Queen Maria Christina (acting as Regent for her daughter) turned to the liberals. She issued a decree of amnesty on October 23, 1833. Liberals, who had been in exile, returned and dominated Spanish politics for decades. The liberals threw their support behind Isabella II and the Carlist Wars resulted. It was in this context that the rumors began flooding in years later that the future Alfonso XII was not fathered by Francisco, Duke of Cadiz, the legitimate husband of Queen Isabella II.

After a tumultuous reign, Isabella II and her husband went into exile with his wife in France in 1868 and adopted the incognito title of Count of Moratalla. In 1870 Francisco and Isabella were amicably separated but in time they actually became good friends. This friendship, which they had certainly not been while she was Queen regnant, was new. The 1874 restoration placed his son Alfonso XII on the throne.

While the King of Spain is recuperating in a Hospital bed after having back surgery his popularity continues to crumble. It has been a scandal filled year. With Spain going through some of its worst financial times in decades. Many of the scandals revolving around the king involve money. Last year he went on an African safari with his mistress that cost tax payers a lot of money and his son-in-law, Iñaki Urdangarin, Duke of Palma de Mallorca,  is involved in a corruption and money laundering scandal. I don’t think the Spanish monarchy can get any lower.

It seems that ever since the abdication of Queen Isabel II in 1868 the Spanish monarchy has stood on tenuous soil. Her eldest son, the future Alfonso XII, was bypassed for the throne which was given to Amadeo of Savoy. Their first candidate, Leopold of Hohenzollern, was rejected sparking the Franco-Prussian War of 1870-71. After Amadeo’s abdication on 1873 the First Spanish Republic was declared. In December of 1874 Spain returned to a monarchical form of government under Alfonso XII.

He was postumously succeeded by his son, Alfonso XIII, in 1886. Alfonso XIII fled Spain in 1931 when the Second Spanish Republic was proclaimed. After the Spanish Civil War of 1936-39 General Francisco Franco became Head of State/Dictator. He restored the Spainsh monarchy in 1947 although he stated the new king would not succeed until his death. He selected Juan-Carlos, grandson of Alfonso XII, bypassing the true heir, Don Juan, Count of Barcelona., whom Franco deemed too liberal. In 1975 Juan-Carlos came to the throne and in 1981 played a significant role in stopping a military coup.

I dislike abdications although I support them if they will save a monarchy. or if it is part of their tradition Is the monarchy really that much in jeopardy or is this hype from the media in order to sell news papers? I do think there are problems but I wonder how grave the situation really is?

I am keepiing my fingers crossed and hopping that Juan-Carlos can pass on a stable throne to his son, Prince Felipe, Prince of Asturias either soon or in the distant future. Meanwhile I wish his Majesty a speedy recovery and better days ahead.