Today is the 185th anniversary of the birth of the Duchess of Teck, born Princes Mary Adelaide of Cambridge on November 27, 1833. 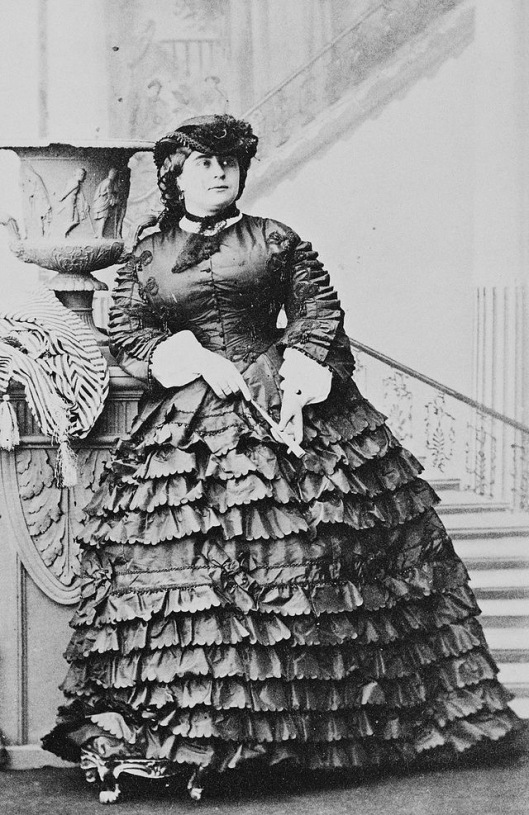 Mary Adelaide was born on November 27, 1833 in Hanover, Germany. Her father was Prince Adolphus, Duke of Cambridge, the youngest surviving son of George III and Charlotte of Mecklenburg-Strelitz. Her mother was Princess Augusta of Hesse-Cassel, the daughter of Prince Friedrich of Hesse-Cassel and Princess Caroline of Nassau-Usingen. The young princess was baptized on January 9, 1834 at Cambridge House, Hanover, by Rev John Ryle Wood, Chaplain to the Duke of Cambridge. Her godmother and paternal aunt Princess Elizabeth, Landgravine of Hesse-Homburg, was the only godparent who was present. The others were King William IV and Queen Adelaide (her paternal uncle and aunt), Princess Mary, Duchess of Gloucester and Edinburgh (her paternal aunt), Princess Marie of Hesse-Cassel (her maternal aunt) and Princess Marie Luise Charlotte of Hesse-Kassel (her maternal first cousin). She was named Mary Adelaide Wilhelmina Elizabeth for her aunts and uncle.

By the age of 30, Mary Adelaide was still unmarried. Her large girth (earning her the disparaging and unkind epithet of “Fat Mary”) and lack of income were contributing factors, as was her advanced age. However, her royal rank prevented her from marrying someone not of royal blood. Her cousin, Queen Victoria, took pity on her and attempted to arrange pairings.

Eventually a suitable candidate was found in Württemberg, Prince Francis of Teck.

Francis was born as Franz Paul Karl Ludwig Alexander on August 28, 1837 in Esseg, Slavonia (now Osijek, Croatia). His father was Duke Alexander of Württemberg, the son of Duke Louis of Württemberg. His mother was Countess Claudine Rhédey von Kis-Rhéde. The marriage was morganatic, meaning that Francis had no succession rights to the Kingdom of Württemberg. His title at birth was Count Francis von Hohenstein, after his mother was created Countess von Hohenstein in her own right by Emperor Ferdinand I of Austria. In 1863, Francis was created Prince of Teck, with the style of Serene Highness, in the Kingdom of Württemberg by Emperor Frank-Josef of Austria.

Although the Prince of Teck was of a lower rank than Mary Adelaide, as the product of a morganatic marriage, but was at least of princely title and of royal blood. With no other options available, Mary Adelaide decided to marry him. The couple were married on June 12, 1866 at St. Anne’s Church, Kew, Surrey.

The Duke and Duchess of Teck chose to reside in London rather than abroad, mainly because Mary Adelaide received £5,000 per annum as a Parliamentary annuity and carried out royal duties. Her mother, the Duchess of Cambridge, also provided her with supplementary income. Requests to Queen Victoria for extra funds were generally refused; however, the queen did provide the Tecks with apartments at Kensington Palace and White Lodge in Richmond Park as a country house.

Mary Adelaide requested that her new husband be granted the style Royal Highness, but this was refused by Queen Victoria. The queen did, however, promote Francis to the rank of Highness in 1887 in celebration of her Golden Jubilee.

Despite their modest income, Mary Adelaide had expensive tastes and lived an extravagant life of parties, expensive food and clothes and holidays abroad. In 1883 they were forced to live more cheaply abroad to reduce their debts. They travelled to Florence, Italy, and also stayed with relatives in Germany and Austria. Initially, they travelled under the names of the Count and Countess von Hohenstein. However, Mary Adelaide wished to travel in more style and reverted to her royal style, which commanded significantly more attention and better service.

The Tecks returned from their self-imposed exile in 1885 and continued to live at Kensington Palace and White Lodge in Richmond Park. Mary Adelaide began devoting her life to charity, serving as patron to Barnardo’s and other children’s charities.

In 1891, Mary Adelaide was keen for her daughter, Princess Victoria Mary of Teck (known as “May”) to marry one of the sons of the Prince of Wales, the future Edward VII.

At the same time, Queen Victoria wanted a British-born bride for the future king, though of course one of royal rank and ancestry, and Mary Adelaide’s daughter fulfilled the rank criteria. After Queen Victoria’s approval, May became engaged to Prince Albert Victor, Duke of Clarence and Avondale, second in line to the British throne. He died suddenly six weeks later. Queen Victoria was fond of Princess Mary and persuaded the Duke of Clarence’s brother and next in the line of succession, Prince George, Duke of York, to marry her instead. After a short morning period they married in the Chapel Royal, St. James’s Palace, on July 6, 1893.

Mary Adelaide never lived to see her daughter become Princess of Wales or Queen, as she died on 27 October 1897 at White Lodge, following an emergency operationShe was buried in the royal vault at St. George’s Chapel, Windsor.

When the Duchess of Teck died, leaving Francis a widower, He continued to live at White Lodge, Richmond, but did not carry out any Royal duties. The Duke of Teck died on 21 January 1900 at White Lodge. He was buried next to his wife in the Royal Vault at St. George’s Chapel, Windsor.