Francis was born in Naples the son of Ferdinand IV-III, King of Naples and Sicily (future King Ferdinand of the Two Sicilies) and his wife Archduchess Maria Carolina of Austria, the thirteenth child of Empress Maria Theresa, Queen of Bohemia Hungry and Croatia Holy Roman Emperor Franz I. He was also the nephew of Archduchess Marie Antoinette and Louis XVI, the last King and Queen of France before the first French Republic.

Francis I, King of the Two Sicilies

In 1796 Francis married his double first cousin Archduchess Maria Clementina of Austria, the tenth child and third daughter of Leopold II, Holy Roman Emperor and Infanta Maria Luisa of Spain (Carlos III, King of Spain, King of Naples and Sicily, and Maria Amalia of Saxony). As double first cousins as they shared all their grandparents in common.

When she died from tuberculosis in 1801, he married his first cousin Infanta María Isabella of Spain, youngest daughter of King Carlos IV of Spain and his wife Maria Luisa of Bourbon-Parma.

After the Bourbon family fled from Naples to Sicily in 1806, Lord William Bentinck, the British resident, had drafted a new constitution along British and French lines. Ferdinand IV-III agreed to abdicate his thrones, with Francis being appointed regent in 1812.

On the abdication of Napoleon I, his father returned to Naples and suppressed the Sicilian constitution, incorporating his two kingdoms into that of the Two Sicilies (1816); Francis then assumed the revived title of duke of Calabria. While still heir apparent he professed liberal ideas, and on the outbreak of the revolution of 1820 he accepted the regency, apparently in a friendly spirit towards the new constitution.

On succeeding to the throne in 1825, however, he pursued a conservative course. He took little part in the government, which he left in the hands of favourites and police officials, and lived with his mistresses, surrounded by soldiers, ever in dread of assassination. During his reign the only revolutionary movement was the outbreak on the Cilento (1828), repressed by the Marquis Delcarretto, an ex-Liberal. He was, however, successful in having the Austrian occupation force withdrawn (1827), thereby relieving a large financial burden on the treasury. 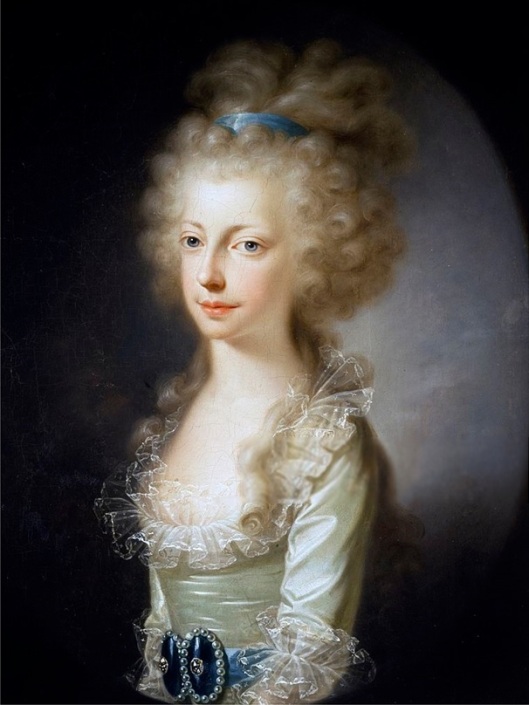 During his reign, the Royal Order of Francis I was founded to reward civil merit.

In 1816, French ambassador Pierre Louis Jean Casimir de Blacas arranged with the Kingdoms of Naples and Sicily for Marie-Caroline (daughter of King Francis I and his first wife) to marry Louis XVIII of France’s nephew, Charles Ferdinand, Duke of Berry. The marriage was held on 24 April 1816 in Naples. Caroline thus became Duchess de Berry; known as Madame de Berry in France.

Even though it was arranged, the marriage was happy, with Marie-Caroline and her husband living at the Élysée Palace in Paris which was given to them.

Queen María Isabella’s constant companion was her second daughter Maria Christina, who was as flirtatious as her mother. Maria Christina was already in her early twenties and her parents were eager to find a royal husband for her.

The opportunity came when María Isabella’s brother, Fernando VII of Spain, suddenly became a widower in May 1829. Queen María Isabella’s eldest daughter, now Infanta Luisa Carlota, quickly arranged the marriage between her sister and their uncle.

King Fernando VII of Spain invited his sister, Queen María Isabella and brother-in-law, King Francis I of the Two-Sicilies, to accompany their daughter to the wedding in Madrid.

Francis I’s was afflicted with gout and on declining health, but María Isabella was anxious to visit her native country after 27 years of absence. She convinced her husband to make the long trip to Spain. Their eldest son, Ferdinand, Duke of Calabria was left as regent during their absence.

Traveling by land, the royal party left for Spain on September 28, 1829. On their way, they visited Pope Pius VIII in Rome. In Grenoble, they met the Duchess of Berry, happy to see her parents after thirteen years. Once in Spain, the marriage was celebrated on January 25,1830.

On the way back, they were reunited once again with Marie-Caroline, the Duchess of Berry, who presented to them to her infant son, their grandson, Prince Henri, Duke of Bordeaux, at Chambord. María Isabella and her husband went to Paris, where they were entertained by King Charles X of France and Navarre. Henri of Bordeaux was later known as Henri, Comte de Chambord, Legitimists heir to the French throne.

In June, the King and Queen left for Genoa reaching Naples on July 30. After their return, the king’s health deteriorated rapidly. King Francis I died on November 8, 1830.