Anne Boleyn (c. 1501 – May 19, 1536) was Queen of England from 1533 to 1536, as the second wife of King Henry VIII. The circumstances of her marriage and of her execution by beheading for treason and other charges made her a key figure in the political and religious upheaval that marked the start of the English Reformation. 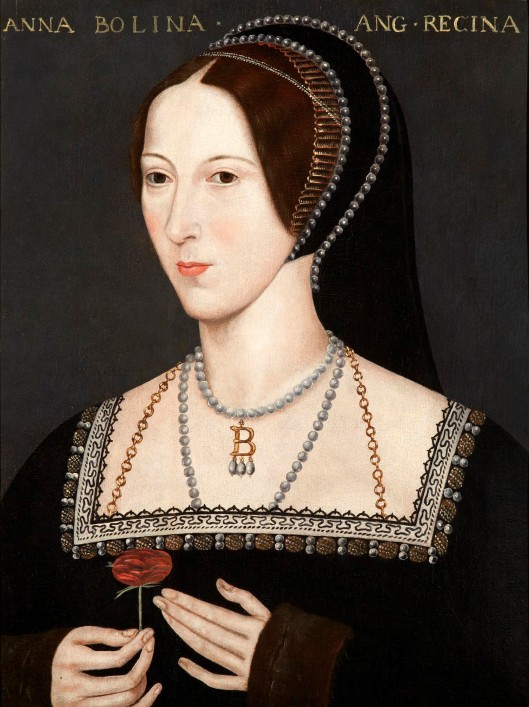 Anne was the daughter of Thomas Boleyn, 1st Earl of Wiltshire, and his wife, Lady Elizabeth Howard, and was educated in the Netherlands and France, largely as a maid of honour to Queen Claude of France. Anne returned to England in early 1522, to marry her Irish cousin James Butler, 9th Earl of Ormond; the marriage plans were broken off, and instead she secured a post at court as maid of honour to Henry VIII’s wife, Catherine of Aragon.

Early in 1523, Anne was secretly betrothed to Henry Percy, son of Henry Percy, 5th Earl of Northumberland, but the betrothal was broken off when the Earl refused to support their engagement. Cardinal Thomas Wolsey refused the match in January 1524 and Anne was sent home to Hever Castle.

In February or March 1526, Henry VIII began his pursuit of Anne. She resisted his attempts to seduce her, refusing to become his mistress, as her sister Mary had previously been. Henry soon focused his desires on annulling his marriage to Catherine so he would be free to marry Anne.

Wolsey failed to obtain an annulment of Henry’s marriage from Pope Clement VII, and when it became clear that Clement would not annul the marriage, Henry and his advisers, such as Thomas Cromwell, began the breaking of the Catholic Church’s power in England and closing the monasteries and the nunneries. In 1532, Henry made Anne the Marquess of Pembroke.

Anne was crowned Queen of England on June 1, 1533. On September 7, she gave birth to the future Queen Elizabeth I. Henry was disappointed to have a daughter rather than a son but hoped a son would follow.

Anne subsequently had three miscarriages and by March 1536, Henry was courting Jane Seymour. In order to marry Seymour, Henry had to find reasons to end the marriage to Anne.

Henry VIII had Anne investigated for high treason (including incest) in April 1536. On May 2, she was arrested and sent to the Tower of London, where she was tried before a jury of peers, including Henry Percy, her former betrothed, and her uncle Thomas Howard, 3rd Duke of Norfolk; she was convicted on May 15 and beheaded four days later.