The War of the Spanish Succession (1701–1715) was a conflict involving many of the leading European powers that was triggered by the death in November 1700 of the childless Carlos II of Spain.

Prince Louis, The Grand Dauphin, had the strongest genealogical claim to the Spanish throne held by King Carlos II who was his maternal uncle. The Grand Dauphin was the son and heir-apparent of King Louis XIV of France and Navarre.

If Philippe, Duke of Anjou refused the crown, the alternative was Archduke Charles of Austria, younger son of Leopold I, Holy Roman Emperor.

Having accepted, Philippe was proclaimed King Felipe V of an undivided Spanish Empire on November 16, 1700. The proclamation led to war, with France and Spain on one side and the Grand Alliance on the other to maintain the separation of the Spanish and French thrones.

At issue wasn’t just who had hereditary right to the Spanish throne; at it’s heart was to established the principle that dynastic rights were secondary to maintaining the balance of power between different countries.

As the expensive War of the Spanish Succession grew unpopular, so did the Whig administration. The impeachment of Henry Sacheverell, a high church Tory Anglican who had preached anti-Whig sermons, led to further public discontent.

Anne thought Sacheverell ought to be punished for questioning the Glorious Revolution, but that his punishment should only be a mild one to prevent further public commotion.

In London, riots broke out in support of Sacheverell, but the only troops available to quell the disturbances were Anne’s guards, and Secretary of State Sunderland was reluctant to use them and leave the Queen less protected.

Anne declared God would be her guard and ordered Sunderland to redeploy her troops. In line with Anne’s views, Sacheverell was convicted, but his sentence—suspension of preaching for three years—was so light as to render the trial a mockery.

The Queen, increasingly disdainful of the Marlboroughs and her ministry, finally took the opportunity to dismiss Sunderland in June 1710.

Godolphin followed in August. The Junto Whigs were removed from office, although Marlborough, for the moment, remained as commander of the army. In their place, she appointed a new ministry headed by Harley, which began to seek peace with France.

Unlike the Whigs, Harley and his ministry were ready to compromise by giving Spain to the Bourbon claimant, Philippe of Anjou, in return for commercial concessions. In the parliamentary elections that soon followed his appointment, Harley, aided by government patronage, secured a large Tory majority.

In January 1711, Anne forced Sarah to resign her court offices, and Abigail took over as Keeper of the Privy Purse. Harley was stabbed by a disgruntled French refugee, the Marquis de Guiscard, in March, and Anne wept at the thought he would die. He recovered slowly. Godolphin’s death from natural causes in September 1712 reduced Anne to tears; she blamed their estrangement on the Marlboroughs.

Holy Roman Emperor Joseph I, died in April 1711and his brother Archduke Charles of Austria, succeeded him in Austria, Hungary and the Holy Roman Empire as Emperor Charles VI.

To also give him the Spanish throne was no longer in Britain’s interests, but the proposed Peace of Utrecht submitted to Parliament for ratification did not go as far as the Whigs wanted to curb Bourbon ambitions.

In the House of Commons, the Tory majority was unassailable, but the same was not true in the House of Lords. The Whigs secured the support of the Earl of Nottingham against the treaty by promising to support his Occasional Conformity bill.

Seeing a need for decisive action to erase the anti-peace majority in the House of Lords, and seeing no alternative, Anne reluctantly created twelve new peers, even though such a mass creation of peers was unprecedented. 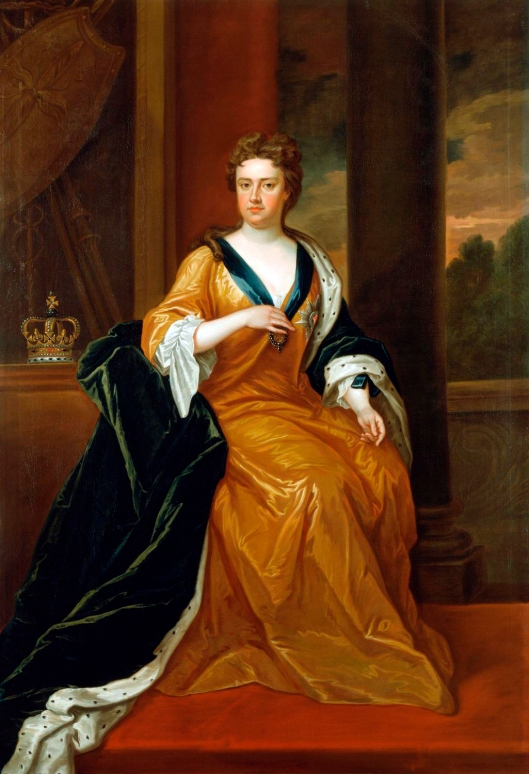 Abigail’s husband, Samuel Masham, was made a baron, although Anne protested to Harley that she “never had any design to make a great lady of [Abigail], and should lose a useful servant”. On the same day, Marlborough was dismissed as commander of the army. The peace treaty was ratified and Britain’s military involvement in the War of the Spanish Succession ended.

By signing the Treaty of Utrecht, King Louis XIV of France recognised the Hanoverian succession in Britain. Nevertheless, gossip that Anne and her ministers favoured the succession of her Catholic half-brother, Prince James Francis, Prince of Wales rather than the Hanoverians continued, despite Anne’s denials in public and in private.

The rumours were fed by her consistent refusals to permit any of the Hanoverians to visit or move to England, and by the intrigues of Harley and the Tory Secretary of State Lord Bolingbroke, who were in separate and secret discussions with her half-brother about a possible Stuart restoration until early 1714.

Anne was unable to walk between January and July 1713. At Christmas, she was feverish, and lay unconscious for hours, which led to rumours of her impending death. She recovered, but was seriously ill again in March.

By July, Anne had lost confidence in Harley; his secretary recorded that Anne told the cabinet “that he neglected all business; that he was seldom to be understood; that when he did explain himself, she could not depend upon the truth of what he said; that he never came to her at the time she appointed; that he often came drunk; [and] last, to crown all, he behaved himself towards her with ill manner, indecency and disrespect.”

On July 27, 1714, during Parliament’s summer recess, she dismissed Harley as Lord Treasurer. Despite failing health, which her doctors blamed on the emotional strain of matters of state, she attended two late-night cabinet meetings that failed to determine Harley’s successor.

A third meeting was cancelled when she became too ill to attend. She was rendered unable to speak by a stroke on July 30, 1714, the anniversary of Gloucester’s death, and on the advice of the Privy Council handed the treasurer’s staff of office to Whig grandee Charles Talbot, 1st Duke of Shrewsbury.

Anne died around 7:30 a.m. on August 1, 1714. John Arbuthnot, one of her doctors, thought her death was a release from a life of ill-health and tragedy; he wrote to Jonathan Swift, “I believe sleep was never more welcome to a weary traveller than death was to her.”

She was buried beside her husband and children in the Henry VII Chapel on the South Aisle of Westminster Abbey on August 24.

The Electress Sophia of Hanover had died on May 28, two months before Anne, so the Electress’s son, Georg Ludwig, Elector of Hanover, succeeded to the British throne as King George of Great Britain and Ireland pursuant to the Act of Settlement 1701.

The possible Catholic claimants, including Anne’s half-brother, James Francis, Prince of Wales were ignored. The Elector’s accession was relatively stable: a Jacobite rising in 1715 failed. Marlborough was reinstated, and the Tory ministers were replaced by Whigs.