He ascended the throne of France at age 15 after the accidental death of his father, Henry II, in 1559. His short reign was dominated by the first stirrings of the French Wars of Religion.

Although the royal age of majority was 14, his mother, Catherine de’ Medici, entrusted the reins of government to his wife Mary’s uncles from the House of Guise, staunch supporters of the Catholic cause. They were unable to help Catholics in Scotland against the progressing Scottish Reformation, however, and the Auld Alliance was dissolved.

François was succeeded by two of his brothers in turn, both of whom were also unable to reduce tensions between Protestants and Catholics. 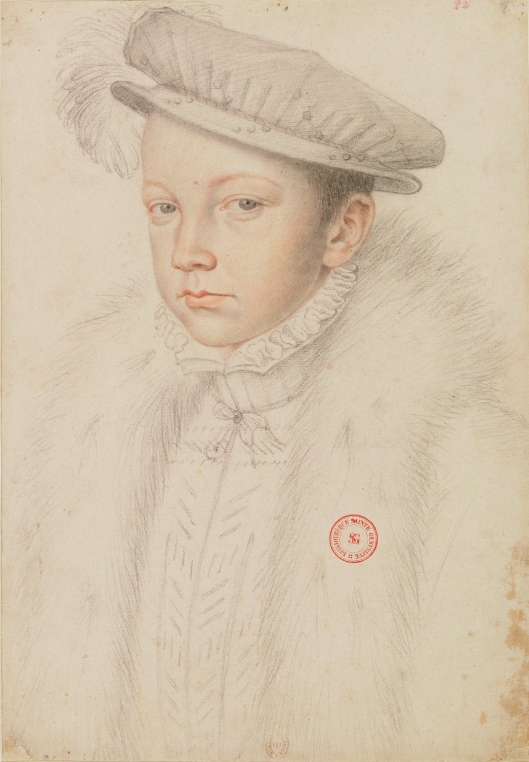 François was born 11 years after his parents’ wedding Henri II and Catherinede Médici. The long delay in producing an heir may have been due to his father’s repudiation of his mother in favour of his mistress Diane de Poitiers, but this repudiation was mitigated by Diane’s insistence that Henri spend his nights with Catherine.

François was at first raised at the Château de Saint-Germain-en-Laye. He was baptised on February 10, 1544 at the Chapelle des Trinitaires in Fontainebleau. His godparents were François I (who knighted him during the ceremony), Pope Paul III, and his great-aunt Marguerite de Navarre. He became governor of Languedoc in 1546 and Dauphin of France in 1547, when his grandfather François I died.

King Henri II, his father, arranged a remarkable betrothal for his son to Mary I, Queen of Scots, in the Châtillon agreement of January 27, 1548, when François was only four years old. Mary had been crowned Queen of Scotland in Stirling Castle on September 9, 1543 at the age of nine months following the death of her father James V. Mary was a granddaughter of Claude, Duke of Guise, a very influential figure at the court of France.

Once the marriage agreement was formally ratified, the six-year-old Mary was sent to France to be raised at court until the marriage. She was tall for her age and eloquent, and Francis was unusually short and stuttered. Henri II said, “from the very first day they met, my son and she got on as well together as if they had known each other for a long time”.

On April 24, 1558, François and Mary married in Notre Dame Cathedral in Paris. It was a union that could have given the future Kings of France the throne of Scotland and also a claim to the throne of England through Mary’s great-grandfather, King Henry VII of England. As a result of the marriage, François became King Consort in Scotland until his death. The marriage produced no children, and may never even have been consummated, possibly due to François illnesses or undescended testicles.

A little over a year after his marriage, on July 10, 1559, François became king at age 15 upon the death of Henri II, who died from injuries that he suffered in a jousting accident. On September 21, 1559, François II was crowned king in Reims by his uncle Charles, Cardinal of Lorraine. The crown was so heavy that nobles had to hold it in place for him. The court then moved to the Loire Valley, where the Château de Blois and the surrounding forests were the new king’s home. Francis II took the sun for his emblem and for his mottoes Spectanda fides (This is how faith should be respected) and Lumen rectis (Light for the righteous)

The king’s health deteriorated in November 1560. On November 16, he fainted. After only 17 months on the throne, François II died on December 5, 1560 in Orléans, Loiret, from an ear condition. Multiple diseases have been suggested, such as mastoiditis, meningitis, or otitis exacerbated into an abscess.

Ambroise Paré, the royal surgeon, considered performing a trepanation. Some suspected Protestants of having poisoned the king, a view held by Catholics as the tensions between them and Protestants were on the rise, but this has not been proven.

François II died childless, so his younger brother Charles, then ten years old, succeeded him as King Charles IX of France. On December 21, the council named Catherine de Médici Regent of France. The Guises left the court, while MaryI, Queen of Scots, François II’s widow, returned to Scotland. Louis, Prince of Condé, who was jailed and awaiting execution, was freed after some negotiations with Catherine de Médici.

On December 23, 1560, François II’s body was interred in the Basilica of St Denis by the Prince of La Roche-sur-Yon.