When Queen Victoria died on January 22, 1901, Edward became King of the United Kingdom, Emperor of India and, in an innovation, King of the British Dominions. He chose to reign under the name of Edward VII, instead of Albert Edward—the name his mother had intended for him to use—declaring that he did not wish to “undervalue the name of Albert” and diminish the status of his father with whom the “name should stand alone”.

The numeral VII was occasionally omitted in Scotland, even by the national church, in deference to protests that the previous Edwards were English kings who had “been excluded from Scotland by battle”. J. B. Priestley recalled, “I was only a child when he succeeded Victoria in 1901, but I can testify to his extraordinary popularity. He was in fact the most popular king England had known since the earlier 1660s.” 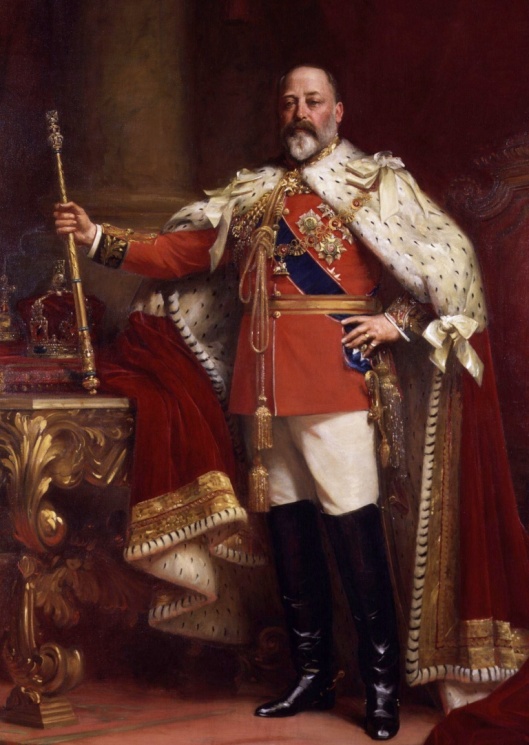 He fostered good relations between Britain and other European countries, especially France, for which he was popularly called “Peacemaker”, but his relationship with his nephew, the German Emperor Wilhelm II, was poor.

The Edwardian era, which covered Edward’s reign and was named after him, coincided with the start of a new century and heralded significant changes in technology and society, including steam.

Edward habitually smoked twenty cigarettes and twelve cigars a day. In 1907, a rodent ulcer, a type of cancer affecting the skin next to his nose, was cured with radium. Towards the end of his life he increasingly suffered from bronchitis.

He suffered a momentary loss of consciousness during a state visit to Berlin in February 1909. In March 1910, he was staying at Biarritz when he collapsed. He remained there to convalesce, while in London Asquith tried to get the Finance Bill passed.

The king’s continued ill health was unreported, and he attracted criticism for staying in France while political tensions were so high. On April 27, he returned to Buckingham Palace, still suffering from severe bronchitis. Alexandra returned from visiting her brother, King George I of Greece, in Corfu a week later on May 5.

On May 6, Edward suffered several heart attacks, but refused to go to bed, saying, “No, I shall not give in; I shall go on; I shall work to the end.” Between moments of faintness, his son the Prince of Wales (shortly to be King George V) told him that his horse, Witch of the Air, had won at Kempton Park that afternoon.

The king replied, “Yes, I have heard of it. I am very glad”: his final words. At 11:30 p.m. he lost consciousness for the last time and was put to bed. He died 15 minutes later. The Prince of Wales succeeded to the throne as King George V.

Alexandra refused to allow Edward’s body to be moved for eight days afterwards, though she allowed small groups of visitors to enter his room. On May 11, the late king was dressed in his uniform and placed in a massive oak coffin, which was moved on May 14 to the throne room, where it was sealed and lay in state, with a guardsman standing at each corner of the bier.

Despite the time that had elapsed since his death, Alexandra noted the King’s body remained “wonderfully preserved”. On the morning of May 17, the coffin was placed on a gun carriage and drawn by black horses to Westminster Hall, with the new king, his family and Edward’s favourite dog, Caesar, walking behind.

Following a brief service, the royal family left, and the hall was opened to the public; over 400,000 people filed past the coffin over the next two days. As Barbara Tuchman noted in The Guns of August, his funeral, held on May 20, 1910, marked “the greatest assemblage of royalty and rank ever gathered in one place and, of its kind, the last.” A royal train conveyed the king’s coffin from London to Windsor Castle, where Edward VII was buried at St George’s Chapel.