Archduke Charles of Austria-Este, the son of Archduke Otto of Austria and Princess Maria Josepha of Saxony, fifth child of King Georg of Saxony and Infanta Maria Anna of Portugal, herself the eldest surviving daughter of Queen Maria II of Portugal and her King Consort, Ferdinand of Saxe-Coburg-Koháry.

Princess Zita of Bourbon-Parma, born as the seventeenth child of the dispossessed Roberto I, Duke of Parma, and his second wife, Infanta Maria Antonia of Portugal, herself the seventh and last child of King Miguel of Portugal and Adelaide of Löwenstein-Wertheim-Rosenberg. The unusual name Zita was given to her after Zita, a popular Italian Saint who had lived in Tuscany in the 13th century.

Archduchess Maria Annunziata and Archduchess Elisabeth Amalie of Austria, were the two daughters of Archduchess Maria Theresa of Austria were Zita’s first cousins and Charles’ half-aunts. Charles and Zita had met as children but did not see one another for almost ten years, as each pursued their education. In 1909, his Dragoon regiment was stationed at Brandýs nad Labem, from where he visited his aunt at Františkovy Lázně.

It was during one of these visits that Charles and Zita became reacquainted.,Charles was under pressure to marry (Franz Ferdinand, his uncle and first-in-line, had married morganatically, and his children were excluded from the throne) and Zita had a suitably royal genealogy.

We were of course glad to meet again and became close friends. On my side feelings developed gradually over the next two years. He seemed to have made his mind up much more quickly, however, and became even more keen when, in the autumn of 1910, rumours spread about that I had got engaged to a distant Spanish relative, Don Jaime, the Duke of Madrid. On hearing this, the Archduke came down post haste from his regiment at Brandýs and sought out his grandmother, Archduchess Maria Theresa, who was also my aunt and the natural confidante in such matters. He asked if the rumor was true and when told it was not, he replied, “Well, I had better hurry in any case or she will get engaged to someone else.”

Archduke Charles traveled to Villa Pianore and asked for Zita’s hand and, on June 13, 1911, their engagement was announced at the Austrian court.: Zita in later years recalled that after her engagement she had expressed to Charles her worries about the fate of the Austrian Empire and the challenges of the monarchy.

Charles and Zita were married at the Schwarzau castle on October 21, 1911. Charles’s great-uncle, the 81-year-old Emperor Franz Joseph, attended the wedding. He was relieved to see an heir make a suitable marriage, and was in good spirits, even leading the toast at the wedding breakfast. Archduchess Zita soon conceived a son, and Archduke Otto, future Crown Prince of Austria, was born November 20, 1912. Seven more children followed in the next decade.

In 1916, Emperor Franz Joseph died and Charles became Emperor of Austria, King of Hungary (as Charles IV), King of Croatia, and King of Bohemia (as Charles III), and the last of the monarchs belonging to the House of Habsburg-Lorraine to rule over Austria-Hungary.

At the end of the Great War, on the day of the Armistice of November 11, 1918, Charles issued a carefully worded proclamation in which he recognized the Austrian people’s right to determine the form of the state and “relinquish[ed] every participation in the administration of the State.” He also released his officials from their oath of loyalty to him. On the same day, the Imperial Family left Schönbrunn Palace and moved to Castle Eckartsau, east of Vienna. On November 13, following a visit with Hungarian magnates, Charles issued a similar proclamation—the Eckartsau Proclamation—for Hungary.

Although it has widely been cited as an “abdication”, the word itself was never used in either proclamation. Indeed, he deliberately avoided using the word abdication in the hope that the people of either Austria or Hungary would vote to recall him.

Encouraged by Hungarian royalists (“legitimists”), Charles sought twice in 1921 to reclaim the throne of Hungary, but failed largely because Hungary’s regent, Admiral Miklós Horthy (the last commander of the Imperial and Royal Navy), refused to support Charles’s restoration. 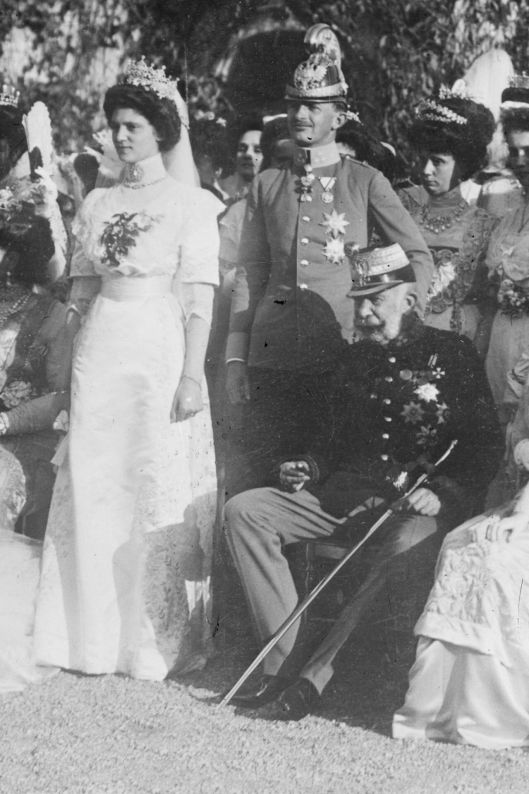 After the second failed attempt at restoration in Hungary, Charles and his pregnant wife Zita were arrested and quarantined at Tihany Abbey. On 1 November 1921 they were taken to the Hungarian Danube harbour city of Baja, were taken on board the monitor HMS Glowworm, and there removed to the Black Sea where they were transferred to the light cruiser HMS Cardiff. On November 19, 1921 they arrived at their final exile, the Portuguese island of Madeira. Compared to the imperial glory in Vienna and even at Eckartsau, conditions there were certainly impoverished.

Charles did not leave Madeira. On March 9, 1922 he had caught a cold in town, which developed into bronchitis and subsequently progressed to severe pneumonia. Having suffered two heart attacks, he died of respiratory failure on April 1, in the presence of his wife (who was pregnant with their eighth child) and nine-year-old former Crown Prince Otto, remaining conscious almost until his last moments. His last words to his wife were “I love you so much.” He was 34 years old. .

After her husband’s death, Zita and her son Otto served as symbols of unity for the exiled dynasty. A devout Catholic, she raised a large family after being widowed at the age of 29, and never remarried.

Zita lived a long life. After a memorable 90th birthday, at which she was surrounded by her now vast family, Zita’s habitually robust health began to fail. She developed inoperable cataracts in both eyes. Her last big family gathering took place at Zizers, in 1987, when her children and grandchildren joined in celebrating Empress Zita’s 95th birthday.

While visiting her daughter, in summer 1988, she developed pneumonia and spent most of the autumn and winter bedridden. Finally, she called Archduke Otto, in early March 1989, and told him she was dying. He and the rest of the family travelled to her bedside and took turns keeping her company until she died in the early hours of March 14, 1989. She was 96 years old, and was the last surviving child of Roberto, Duke of Parma from both his marriages.

Her funeral was held in Vienna on April 1. The government allowed it to take place on Austrian soil providing that the cost was borne by the Habsburgs themselves. Zita’s body was carried to the Imperial Crypt under Capuchin Church in the same funeral coach she had walked behind during the funeral of Emperor Franz Joseph in 1916.

Her funeral was attended by over 200 members of the Habsburg and Bourbon-Parma families, and the service had 6,000 attendees including leading politicians, state officials and international representatives, including a representative of Pope John Paul II.

Following an ancient custom, the Empress had asked that her heart, which was placed in an urn, stay behind at Muri Abbey, in Switzerland, where the Emperor’s heart had rested for decades. In doing so, Zita assured herself that, in death, she and her husband would remain by each other’s side.