On November 1, 1894, Alexander III died aged just 49 at Livadia. In her diary Maria wrote, “I am utterly heartbroken and despondent, but when I saw the blissful smile and the peace in his face that came after, it gave me strength.” Two days later, the Prince and Princess of Wales arrived at Livadia from London. While the Prince of Wales took it upon himself to involve himself in the preparations for the funeral, the Princess of Wales spent her time comforting grieving Maria, including praying with her and sleeping at her bedside.

Maria Feodorovna’s birthday was a week after the funeral, and as it was a day in which court mourning could be somewhat relaxed, Nicholas used the day to marry Alix of Hesse-Darmstadt, who took the name Alexandra Feodorovna.

As Empress Dowager, Maria was much more popular than either Emperor Nicholas III or Empress Alexandra. During her son’s coronation, she, Nicholas, and Alexandra arrived in separate carriages. She was greeted with “almost deafening” applause. A visiting writer Kate Kool noted that she “provoked more cheering from the people than did her son. The people have had thirteen years in which to know this woman and they have learned to love her very much.”

Richard Harding Davis, an American journalist, was surprised that she “was more loudly greeted than either the Emperor or the Empress.” Once the death of Alexander III had receded, Maria again took a brighter view of the future. “Everything will be all right”, as she said. Maria continued to live in the Anichkov Palace in St. Petersburg and at Gatchina Palace.

During the first years of her son’s reign, Maria often acted as the political adviser to the Emperor. Uncertain of his own ability and aware of her connections and knowledge, Emperor Nicholas II often told the ministers that he would ask her advice before making decisions, and the ministers sometimes suggested this themselves. It was reportedly on her advice that Nicholas initially kept his father’s ministers.

Maria herself estimated that her son was of a weak character and that it was better that he was influenced by her than someone worse. Her daughter Olga remarked upon her influence: “she had never before taken the least interest … now she felt it was her duty. Her personality was magnetic and her zest of activity was incredible. She had her finger on every educational pulse in the empire.

The fact that Russian court custom dictated that an empress dowager took precedence over an empress consort, combined with the possessiveness that Maria had of her sons, and her jealousy of Empress Alexandra only served to exacerbate tensions between mother-in-law and daughter-in-law.

Sophie Buxhoeveden remarked of this conflict: “Without actually clashing they seemed fundamentally unable … to understand one another”, and her daughter Olga commented: “they had tried to understand each other and failed. They were utterly different in character, habits and outlook”. Maria was sociable and a good dancer, with an ability to ingratiate herself with people, while Alexandra, though intelligent and beautiful, was very shy and closed herself off from the Russian people. 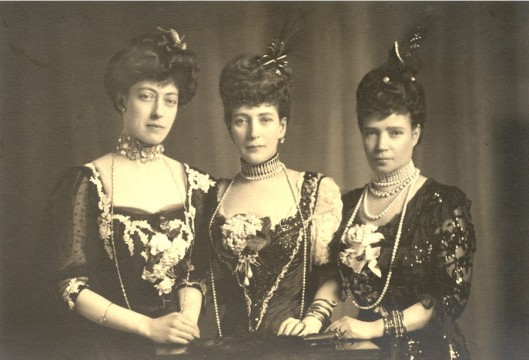 In 1899, Maria’s second son, George, died of tuberculosis in the Caucasus. During the funeral, she kept her composure, but at the end of the service, she ran from the church clutching her son’s top hat that been atop the coffin and collapsed in her carriage sobbing.

In 1892, Maria arranged Olga’s disastrous marriage to Peter, Duke of Oldenburg. For years Nicholas II refused to grant his unhappy sister a divorce, only relenting in 1916 in the midst of World War I. When Olga attempted to contract a morganatic marriage with Nikolai Kulikovsky, Maria Feodorovna and the Emperor tried to dissuade her, yet, they did not protest too vehemently. Indeed, Maria Feodorovna was one of the few people who attended the wedding in November 1916.

By the turn of the twentieth century, Maria was spending increasing time abroad. In 1906, following the death of their father, King Christian IX, she and her sister, Alexandra, who had become queen-consort of the United Kingdom in 1901, purchased the villa of Hvidøre. The following year, a change in political circumstances allowed Maria Feodorovna to be welcomed to England by King Edward VII and Queen Alexandra, Maria’s first visit to England since 1873. Following a visit in early 1908, Maria Feodorovna was present at her brother-in-law and sister’s visit to Russia that summer.

A little under two years later, Maria Feodorovna travelled to England yet again, this time for the funeral of her brother-in-law, King Edward VII, in May 1910. During her nearly three-month visit to England in 1910, Maria Feodorovna attempted, unsuccessfully, to get her sister, now Queen Dowager Alexandra, to claim a position of precedence over her daughter-in-law, Queen Mary.

In 1912, Maria faced trouble with her youngest son, when he secretly married his mistress, much to the outrage and scandal of both Maria Feodorovna and Nicholas.