Edward was the son of Henry VIII and Jane Seymour by his third wife, Jane Seymour. Throughout the realm, the people greeted the birth of a male heir, “whom we hungered for so long”, with joy and relief. Te Deums were sung in churches, bonfires lit, and “their was shott at the Tower that night above two thousand gonnes”. Queen Jane, appearing to recover quickly from the birth, sent out personally signed letters announcing the birth of “a Prince, conceived in most lawful matrimony between my Lord the King’s Majesty and us”.

Edward was christened on October 15, with his half-sisters, the 21-year-old Lady Mary as godmother and the 4-year-old Lady Elizabeth carrying the chrisom; and the Garter King of Arms proclaimed him as Duke of Cornwall and Earl of Chester. The Queen, however, fell ill on October 23, from presumed postnatal complications, and died the following night. Henry VIII wrote to François I of France that “Divine Providence … hath mingled my joy with bitterness of the death of her who brought me this happiness”. 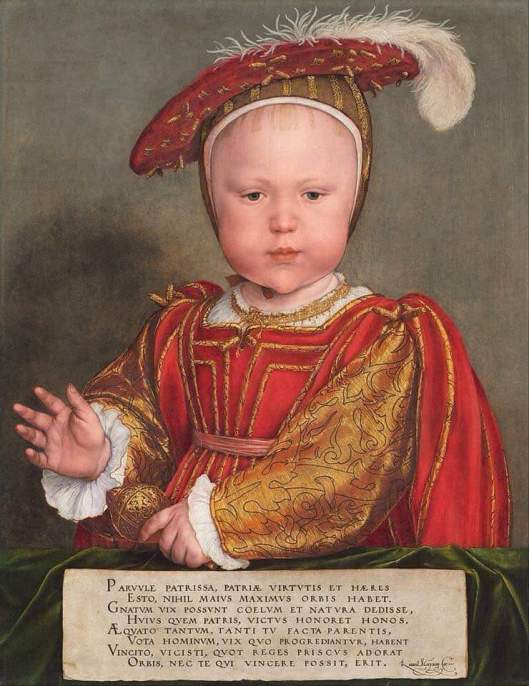 From the age of six, Edward began his formal education under Richard Cox and John Cheke, concentrating, as he recalled himself, on “learning of tongues, of the scripture, of philosophy, and all liberal sciences”. He received tuition from Elizabeth’s tutor, Roger Ascham, and Jean Belmain, learning French, Spanish and Italian.

In addition, he is known to have studied geometry and learned to play musical instruments, including the lute and the virginals. He collected globes and maps and, according to coinage historian C. E. Challis, developed a grasp of monetary affairs that indicated a high intelligence. Edward’s religious education is assumed to have favoured the reforming agenda. His religious establishment was probably chosen by Archbishop Thomas Cranmer, a leading reformer.

Both Cox and Cheke were “reformed” Catholics or Erasmians and later became Marian exiles. By 1549, Edward had written a treatise on the pope as Antichrist and was making informed notes on theological controversies. Edward was England’s first monarch to be raised as a Protestant.

In 1543, Henry invited his children to spend Christmas with him, signalling his reconciliation with his daughters, whom he had previously illegitimised and disinherited. The following spring, he restored them to their place in the succession with a Third Succession Act, which also provided for a regency council during Edward’s minority.

This unaccustomed family harmony may have owed much to the influence of Henry’s new wife, Catherine Parr, of whom Edward soon became fond. He called her his “most dear mother” and in September 1546 wrote to her: “I received so many benefits from you that my mind can hardly grasp them.

On 1 July 1543, Henry VIII signed the Treaty of Greenwich with the Scots, sealing the peace with Edward’s betrothal to the seven-month-old Mary, Queen of Scots. The Scots were in a weak bargaining position after their defeat at Solway Moss the previous November, and Henry, seeking to unite the two realms, stipulated that Mary be handed over to him to be brought up in England.

When the Scots repudiated the treaty in December 1543 and renewed their alliance with France, Henry was enraged. In April 1544, he ordered Edward’s uncle, Edward Seymour, Earl of Hertford, to invade Scotland and “put all to fire and sword, burn Edinburgh town, so razed and defaced when you have sacked and gotten what ye can of it, as there may remain forever a perpetual memory of the vengeance of God lightened upon [them] for their falsehood and disloyalty”.

Seymour responded with the most savage campaign ever launched by the English against the Scots. The war, which continued into Edward’s reign, has become known as “The Rough Wooing”. 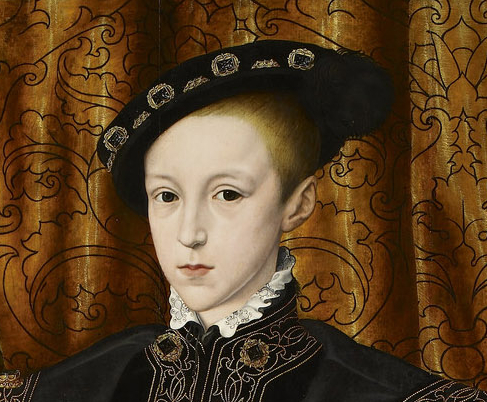 The nine-year-old Edward wrote to his father and stepmother on 10 January 1547 from Hertford thanking them for his new year’s gift of their portraits from life. By January 28, 1547, Henry VIII was dead. Those close to the throne, led by Edward Seymour and William Paget, agreed to delay the announcement of the king’s death until arrangements had been made for a smooth succession.

Seymour and Sir Anthony Browne, the Master of the Horse, rode to collect Edward from Hertford and brought him to Enfield, where Lady Elizabeth was living. He and Elizabeth were then told of the death of their father and heard a reading of the will.

The Lord Chancellor, Thomas Wriothesley, announced Henry’s death to parliament on January 31, and general proclamations of Edward’s succession were ordered. The new king was taken to the Tower of London, where he was welcomed with “great shot of ordnance in all places there about, as well out of the Tower as out of the ships”. The following day, the nobles of the realm made their obeisance to Edward at the Tower, and Seymour was announced as Protector. Henry VIII was buried at Windsor on 16 February, in the same tomb as Jane Seymour, as he had wished.

During his reign, the realm was governed by a regency council because he never reached maturity. The council was first led by his uncle Edward Seymour, 1st Duke of Somerset (1547–1549), and then by John Dudley, 1st Earl of Warwick (1550–1553), who from 1551 was Duke of Northumberland.

Edward’s reign was marked by economic problems and social unrest that in 1549 erupted into riot and rebellion. An expensive war with Scotland, at first successful, ended with military withdrawal from Scotland and Boulogne-sur-Mer in exchange for peace.

The transformation of the Church of England into a recognisably Protestant body also occurred under Edward, who took great interest in religious matters. His father, Henry VIII, had severed the link between the Church and Rome, but had never permitted the renunciation of Catholic doctrine or ceremony. It was during Edward’s reign that Protestantism was established for the first time in England with reforms that included the abolition of clerical celibacy and the Mass, and the imposition of compulsory services in English.

In February 1553, at age 15, Edward fell ill. When his sickness was discovered to be terminal, he and his council drew up a “Devise for the Succession” to prevent the country’s return to Catholicism. Edward named his first cousin once removed, Lady Jane Grey, as his heir, excluding his half-sisters, Mary and Elizabeth.

This decision was disputed following Edward’s death. Edward’s attempt to alter the succession was never sanctioned by Parliament and Jane was deposed by Mary nine days after becoming queen. Because Jane’s tenure on the throne was illegal she is considered a usurper, albeit a puppet of those around her.. Therefore Mary’s reign is marked as starting with the death of her brother Edward VI.

During her reign, Mary reversed Edward’s Protestant reforms, which nonetheless, after Mary’s death, became the basis of the Elizabethan Religious Settlement of 1559.