On September 11, 1941, while a prisoner of the Germans, Leopold secretly married Lilian Baels in a religious ceremony that had no validity under Belgian law, which required a religious marriage to be preceded by a legal or civil marriage. On 6 December, they were married under civil law. The reason for the out-of-order marriages was never officially made public.

Jozef-Ernest Cardinal van Roey, Archbishop of Mechelen, wrote an open letter to parish priests throughout the country announcing Leopold’s second marriage on 7 December. The letter from the Cardinal revealed that the king’s new wife would be known as Princesse de Réthy, not Queen Lilian, and that any children they had would have no claim to the throne. Leopold’s new marriage damaged his reputation further in the eyes of many of his subjects. 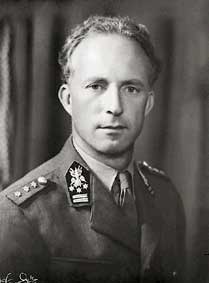 In 1944, Heinrich Himmler ordered Leopold III deported to Germany. Princess Lilian followed with the family in another car the following day under an SS armed guard. The Nazis held the family in a fort at Hirschstein in Saxony from June 1944 to March 1945, and then at Strobl, Austria.

The British and American governments worried about the return of the king. Charles W. Sawyer, US Ambassador to Belgium, warned his government that an immediate return by the king to Belgium would “precipitate serious difficulties”. “There are deep differences even in the royal family and the situation holds dynamite for Belgium and perhaps for Europe”. “The Foreign Office feared that an increasing minority in French-speaking Wallonia would demand either autonomy or annexation to France.

Winant, the American Ambassador to the Court of Saint James’s, reported a Foreign Office official’s concern regarding irredentist propaganda in Wallonia.” and that “the French Ambassador in Brussels… is believed to have connived in the spreading of this propaganda”.

Leopold and his companions were liberated by members of the United States 106th Cavalry Group in early May 1945. Because of the controversy about his conduct during the war, Leopold III and his wife and children were unable to return to Belgium and spent the next six years in exile at Pregny-Chambésy near Geneva, Switzerland. A regency under his brother Prince Charles had been established by the Belgian legislature in 1944.

Van den Dungen, the rector of the Free University of Brussels, wrote to Leopold on June 25, 1945 about concerns for serious disorder in Wallonia, “The question is not if the accusations against you are right or not [but that…] you are no longer a symbol of Belgian unity.”

Gillon, the President of the Belgian Senate, told the king that there was a threat of serious disorder: “If there are only ten or twenty people killed, the situation would become terrible for the king.”

The president of the Belgian Chamber of Representatives, Frans Van Cauwelaert, was concerned that there would be a general strike in Wallonia and revolt in Liège. He wrote, “The country is not able to put down the disorders because of the insufficient forces of the police and a lack of weapons.”

In 1946, a commission of inquiry exonerated Leopold of treason. Nonetheless, controversy concerning his loyalty continued, and in 1950, a referendum was held about his future. Fifty-seven per cent of the voters favoured his return. The divide between Leopoldists and anti-Leopoldists ran along the lines of socialists and Walloons who were mostly opposed (42% favourable votes in Wallonia) and Christian Democrats and Flemish who were more in favour of the King (70% favourable votes in Flanders).

On his return to Belgium in 1950, Leopold was met with one of the most violent general strikes in the history of Belgium. Three protesters were killed when the gendarmerie opened automatic fire upon the protesters. The country stood on the brink of civil war, and Belgian banners were replaced by Walloon flags in Liège and other municipalities of Wallonia. To avoid tearing the country apart, and to preserve the monarchy, Leopold decided on August 1, 1950 to withdraw in favour of his 20-year-old son Baudouin. His official adication took effect on July 16, 1951. In this postponed abdication the king was, in effect, forced by the government of Jean Duvieusart to offer to abdicate in favour of his son.

Leopold and his wife continued to advise King Baudouin until the latter’s marriage in 1960. Some Belgian historians, such as Vincent Delcorps, speak of there having been a “diarchy” during this period. In retirement, he followed his passion as an amateur social anthropologist and entomologist and travelled the world, collecting zoological specimens. Two species of reptiles are named after him, Gehyra leopoldi and Polemon leopoldi.

He went to Senegal and strongly criticized the French decolonization process, and he explored the Orinoco and the Amazon with Heinrich Harrer.

Leopold died in 1983 in Woluwe-Saint-Lambert (Sint-Lambrechts-Woluwe) following emergency heart surgery. He was interred next to Queen Astrid in the royal vault at the Church of Our Lady of Laeken. Leopold’s second wife, the Princess de Réthy, was later interred with them.

2 thoughts on “Abdication of Leopold III of Belgium: Conclusion.”