Angevin Empire, Berengaria of Navarre, Eleanor of Aquitaine, Henry II of England, House of Plantagenet, Richard I of England, The Lion Heart

Richard I (September 8, 1157 – April 6, 1199) was King of England from 1189 until his death. He was the second king of the House of Plantagenet. He also ruled as Duke of Normandy, Aquitaine and Gascony, Lord of Cyprus, Count of Poitiers, Anjou, Maine, and Nantes, and was overlord of Brittany at various times during the same period. He was the third of five sons of King Henry II of England and Duchess Eleanor of Aquitaine and seemed unlikely to become king, but all of his brothers except the youngest, John, predeceased their father. Richard is known as Richard Cœur de Lion or Richard the Lionheart because of his reputation as a great military leader and warrior.

Richard was born on September 8, 1157, probably at Beaumont Palace, in Oxford, England, son of King Henry II of England and Eleanor of Aquitaine. He was a younger brother of Henry the Young King and Matilda, Duchess of Saxony. As a younger son of King Henry II, he was not expected to ascend the throne. He was also an elder brother of Geoffrey II, Duke of Brittany; Queen Eleanor of Castile; Queen Joan of Sicily; and John, Count of Mortain, who succeeded him as king. 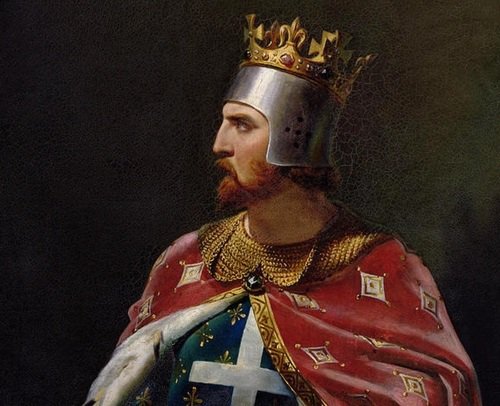 By the age of 16, Richard had taken command of his own army, putting down rebellions in Poitou against his father. Richard was a central Christian commander during the Third Crusade, leading the campaign after the departure of Philippe II of France and achieving considerable victories against his Muslim counterpart, Saladin, although he did not retake Jerusalem from Saladin.

Richard probably spoke both French and Occitan. He was born in England, where he spent his childhood; before becoming king, however, he lived most of his adult life in the Duchy of Aquitaine, in the southwest of France. Following his accession, he spent very little time, perhaps as little as six months, in England.

Most of his life as king was spent on Crusade, in captivity, or actively defending his lands in France. Rather than regarding his kingdom as a responsibility requiring his presence as ruler, he has been perceived as preferring to use it merely as a source of revenue to support his armies. Nevertheless, he was seen as a pious hero by his subjects. He remains one of the few kings of England remembered more commonly by his epithet than his regnal number, and is an enduring iconic figure both in England and in France.

Richard first grew close to her at a tournament held in her native Navarre. The wedding was held in Limassol on May 12, 1191 at the Chapel of St George and was attended by Richard’s sister Joan, whom he had brought from Sicily. The marriage was celebrated with great pomp and splendour, many feasts and entertainments, and public parades and celebrations followed commemorating the event. Richard took his new wife on crusade with him briefly, though they returned separately. Berengaria had almost as much difficulty in making the journey home as her husband did, and she did not see England until after his death. After his release from German captivity, Richard showed some regret for his earlier conduct, but he was not reunited with his wife. The marriage remained childless.

In March of 1199, Richard was in Limousin suppressing a revolt by Viscount Aimar V of Limoges. Although it was Lent, he “devastated the Viscount’s land with fire and sword”. He besieged the puny, virtually unarmed castle of Châlus-Chabrol. Some chroniclers claimed that this was because a local peasant had uncovered a treasure trove of Roman gold.

On March 25, 1199, Richard was hit in the shoulder by a crossbow, and the wound turned gangrenous. Richard asked to have the crossbowman brought before him; called alternatively Pierre (or Peter) Basile, John Sabroz, Dudo, and Bertrand de Gourdon (from the town of Gourdon) by chroniclers, the man turned out (according to some sources, but not all) to be a boy.

He said Richard had killed his father and two brothers, and that he had killed Richard in revenge. He expected to be executed, but as a final act of mercy Richard forgave him, saying “Live on, and by my bounty behold the light of day”, before he ordered the boy to be freed and sent away with 100 shillings. It is unclear whether the pardon was upheld following his death. According to one chronicler, Richard’s last act of chivalry proved fruitless when the infamous mercenary captain Mercadier had the crossbowman flayed alive and hanged as soon as Richard died.

Richard died on April 6, 1199 in the arms of his mother, and thus “ended his earthly day”. Because of the nature of Richard’s death, it was later referred to as “the Lion by the Ant was slain”. Richard produced no legitimate heirs and acknowledged only one illegitimate son, Philip of Cognac. As a result, he was succeeded by his brother John as king. However, his French territories initially rejected John as a successor, preferring his nephew Arthur, whose claim was by modern standards better than John’s. The lack of any direct heirs from Richard was the first step in the dissolution of the Angevin Empire.