In April 1894, Tsarevich Nicholas Alexandrovich of Russia joined his Uncle Sergei and Aunt Elisabeth (born a Princess of Hesse and By Rhine) on a journey to Coburg, Germany, for the wedding of Elisabeth’s and Alix’s brother, Ernst-Ludwig, Grand Duke of Hesse and By Rhine to their mutual first cousin Princess Victoria-Melita of Edinburgh and Saxe-Coburg and Gotha.

Ernst-Ludwig, Grand Duke of Hesse and By Rhine and Princess Victoria-Melita of Edinburgh

The wedding took place on April 19, 1894, at Schloss Ehrenburg. The match was actively encouraged by their mutual grandmother, Queen Victoria, who attended the wedding.

Other guests attended the wedding including Emperor Wilhelm II, the Empress Friedrich (Emperor Wilhelm’s mother and Queen Victoria’s eldest daughter), Nicholas’s uncle, the Prince of Wales, (future King Edward VII) and the bride’s parents, Prince Alfred and his wife Maria (daughter of Emperor Alexander II of Russia) the reigning Duke and Duchess of Saxe-Coburg and Gotha.

Once in Coburg Nicholas proposed to Alix, but she rejected his proposal, being reluctant to convert to Orthodoxy. But Emperor Wilhelm II later told her she had a duty to marry Nicholas and to convert, as her sister Elisabeth had voluntarily done in 1892.

Thus Nicholas and Alix became officially engaged on April 20, 1894. Nicholas’s parents Emperor Alexander III and Empress Maria Feodorovna (Dagmar of Denmark) initially hesitated to give the engagement their blessing, as Alix had made poor impressions during her visits to Russia. However, they gave their consent only when they saw Emperor Alexander III’s health deteriorating.

On April 21, 1894 this famous picture of Queen Victoria and many royals was taken at Edinburgh Palais in Coburg during the wedding festivities. Despite this being the wedding of Ernst-Ludwig, Grand Duke of Hesse and By Rhine and Princess Victoria-Melita of Edinburgh and Saxe-Coburg and Gotha, the excitement of imminent match between Tsarevich Nicholas and Alix of Hesse and By Rhine threw those nuptial celebrations into the shade. 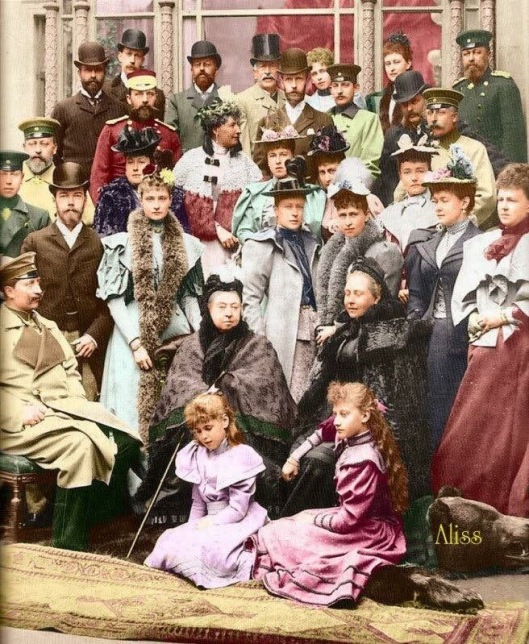