In his memoirs, Bismarck describes Wilhelm as an old-fashioned, courteous, infallibly polite gentleman and a genuine Prussian officer, whose good common sense was occasionally undermined by “female influences”. This was a reference to Wilhelm’s wife, who had been educated by, among others Johann Wolfgang von Goethe and was intellectually superior to her husband. She was also at times very outspoken in her opposition to official policies as she was a liberal. 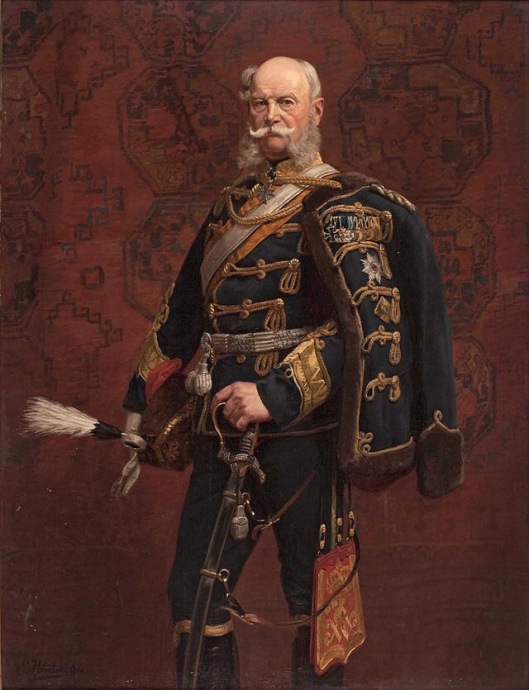 Wilhelm, however, had long been strongly opposed to liberal ideas. Despite possessing considerable power as Emperor, granted to him by the new constitution, Wilhelm left the task of governing mostly to his chancellor, limiting himself to representing the state and approving Bismarck’s every policy.

On May 11, 1878, a plumber named Emil Max Hödel failed in an assassination attempt on Wilhelm in Berlin. Hödel used a revolver to shoot at the then 81-year-old Emperor, while he and his daughter, Princess Louise, paraded in their carriage on Unter den Linden. When the bullet missed, Hödel ran across the street and fired another round which also missed. In the commotion one of the individuals who tried to apprehend Hödel suffered severe internal injuries and died two days later. Hödel was seized immediately. He was tried, convicted, sentenced to death, and executed on August 16, 1878.

A second attempt to assassinate Wilhelm was made on June 2, 1878 by Dr. Karl Nobiling. As the Emperor drove past in an open carriage, the assassin fired two shots from a shotgun at him from the window of a house off the Unter den Linden. Wilhelm was severely wounded and was rushed back to the palace. Nobiling shot himself in an attempt to commit suicide. While Wilhelm survived this attack, the assassin died from his self-inflicted wound three months later 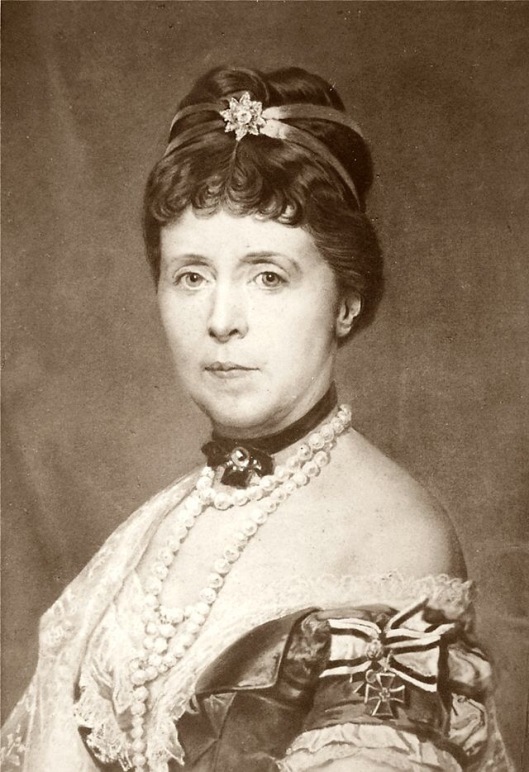 These attempts on Wilhelm’s life thus became the pretext for the institution of the Anti-Socialist Law, which was introduced by Bismarck’s government with the support of a majority in the Reichstag on October 18, 1878, for the purpose of fighting the socialist and working-class movement.

These laws deprived the Social Democratic Party of Germany of its legal status; prohibited all organizations, workers’ mass organizations and the socialist and workers’ press; decreed confiscation of socialist literature; and subjected Social-Democrats to reprisals. The laws were extended every 2–3 years. Despite the reprisals the Social Democratic Party increased its influence among the masses. Under pressure of the mass working-class movement the laws were repealed on October 1, 1890. 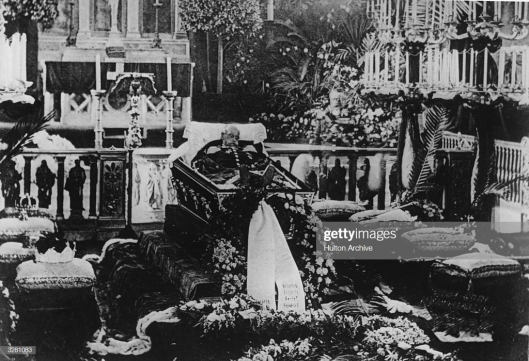 In August 1878, Russian Emperor Alexander II, Wilhelm’s nephew, wrote a letter (known as Ohrfeigenbrief) to him complaining about the treatment Russian interests had received at the Congress of Berlin. In response Wilhelm, his wife Augusta, and his son the Crown Prince Friedrich travelled to Russia (against the advice of Bismarck) to mend fences in face-to-face talks. However, by once again threatening to resign, Bismarck overcame the opposition of Wilhelm to a closer alliance with Austria. In October, Wilhelm agreed to the Dual Alliance (Zweibund) between Germany and Austria-Hungary, which was directed against Russia.

Despite the assassination attempts and Wilhelm’s unpopular role in the 1848 uprising, he and his wife were very popular, especially in their later years. Many people considered them the personification of “the old Prussia” and liked their austere and simple lifestyle. Wilhelm died on March 9, 1888 in Berlin after a short illness. He was aged 90 and he died 13 days before his 91st birthday. He was buried on March 16, at the Mausoleum at Park Charlottenburg.

The Year of the Three Emperors 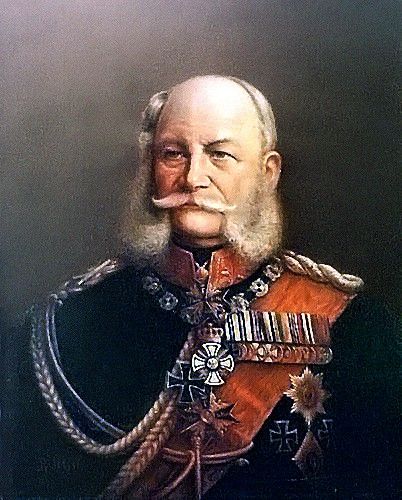 Wilhelm I, German Emperor and King of Prussia

1888 is called the Year of the Three Emperors, during the German Empire in German history. The year is considered to have memorable significance because of the deaths of two German Emperors, leading to a rapid succession of three monarchs within one year.

As we’ve seen, Emperor Wilhelm I died on March 9, 1888 after his long reign. He was then succeeded by his son, Crown Prince Friedrich Wilhelm, who became known as German Emperor Friedrich III when he assumed the throne. Along with his military successes, Friedrich III was a reputed liberal and married to the United Kingdom’s liberal Princess Royal Victoria, eldest child of Queen Victoria and Prince Albert of Saxe-Coburg-Gotha. 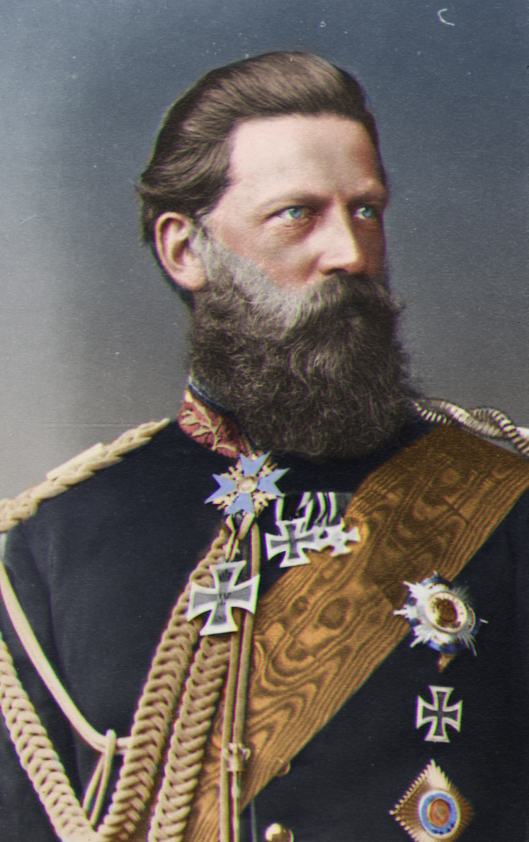 However, by the time of his father’s death, Friedrich was 56 years old and had already developed a terminal case of cancer of the larynx before he assumed the German imperial throne. Friedrich attempted to have it treated, but it was not successful. Due to this illness and subsequent treatment, as Emperor, Friedrich III could not talk during his short reign and had to communicate through writing. Friedrich III still accomplished some of his duties as emperor despite his protracted illness; however, he did not have any lasting effect upon Germany and was unable to enact any of his liberal policies. He died after only 99 days of rule on June 15, 1888. 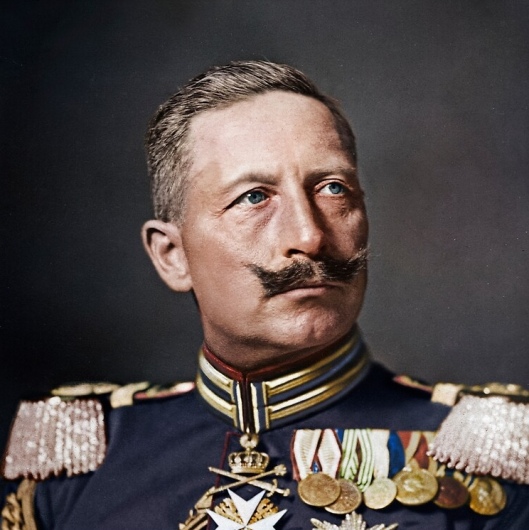 Friedrich III’s son, Wilhelm II, then succeeded to the throne at age 29. Unlike his father, Wilhelm II did not have any liberal tendencies. Upon consolidating power as emperor, Wilhelm launched Germany on a bellicose “New Course” to cement its status as a respected world power. However, he frequently undermined this aim by making tactless, alarming public statements without consulting his ministers.

He also did much to alienate his country from the other Great Powers by initiating a massive build-up of the German Navy, challenging French control over Morocco, and backing the Austrian annexation of Bosnia in 1908. His turbulent reign ultimately culminated in his guarantee of military support to Austria-Hungary during the crisis of July 1914, resulting in the outbreak of World War I. Wilhelm II became a figurehead during World War I and Germany was ruled by military generals. In 1918 Wilhelm II was pressured into abdicating resulting in the fall of the German Empire at the end of war.