Wilhelm was not expected to ascend to the throne. He was educated from 1801 to 1809 by Johann Friedrich Gottlieb Delbrück, who was also in charge of the education of Wilhelm’s elder brother, the Crown Prince Friedrich Wilhelm. At age twelve, his father appointed him an officer in the Prussian army. The year 1806 saw the defeat of Prussia by France and the end of the Holy Roman Empire.

Queen Louise of Prussia with her two eldest sons (later King Friedrich Wilhelm IV of Prussia and the first German Emperor Wilhelm I), circa 1808

Wilhelm served in the army from 1814 onward. Like his father he fought against Napoleon I of France during the part of the Napoleonic Wars. In 1815, Wilhelm was promoted to major and commanded a battalion fought under Gebhard Leberecht von Blücher at the Battles of Ligny and Waterloo. He became a diplomat, engaging in diplomatic missions after 1815..

In 1814 the Russian imperial family arranged the marriage of Wilhelm’s sister, Princess Charlotte of Prussia, to Grand Duke Nicholas Pavlovich of Russia, for political reasons, and in 1817 he accompanied her to Saint Petersburg. The couple married on July 1, 1817. Upon her marriage, Charlotte converted to Russian Orthodoxy, and took the Russian name Alexandra Feodorovna. Ideally matched with her husband, she had a happy marriage that produced a large family; seven of her children survived childhood. Following the death of her brother-in-law, Emperor Alexander I of Russia, in December 1825, Alexandra’s husband became the new Russian emperor, Emperor Nicholas I.

In 1826 Wilhelm was forced to abandon a relationship with Polish noblewoman Princess Elisa Radziwill. Princess Elisa was a daughter of Prince Antoni Radziwiłł and Princess Louise of Prussia (the second daughter of August Ferdinand of Prussia by his wife Margravine Elisabeth Louise of Brandenburg-Schwedt), niece of King Friedrich II the Great of Prussia. Therefore Prince Wilhelm was when he met with and fell in love with her.

Wilhelm’s father, King Friedrich Wilhelm III was actually fond of the relationship between Wilhelm and Elisa, but some in the Prussian court had discovered historical allegations that her ancestors had bought their princely title from Maximilian I, Holy Roman Emperor. In the eyes of certain people, she was not deemed of sufficiently high nobility to marry the heir to the Prussian throne.

Princess was not considered royal, because her father was not a reigning prince. Wilhelm’s older brother, the future Friedrich Wilhelm IV of Prussia was married to Elisabeth Ludovika of Bavaria, the daughter of King Maximilian I Joseph of Bavaria and Caroline of Baden.and Elisabeth was descended from both Bogusław Radziwiłł and Prince Janusz Radziwiłł. A way was sought to make Elisa more acceptable to those that felt she was unsuitable.

Thus in 1824, the King of Prussia turned to the childless Emperor Alexander I of Russia to adopt Elisa, but the Russian ruler declined. The second adoption plan by Elisa’s uncle, Prince August of Prussia likewise failed as the responsible committee considered that adoption “does not alter the blood” (a principle which governs noble and royal connections to the present day). Another factor was the influence of the Mecklenburgish kinsmen of the deceased Queen Louise in the German and Russian courts who were not fond of Elisa’s father and opposed the possible marriage.

Eventually, in June 1826, Wilhelm’s father was obligated to demand the renunciation of a potential marriage to Elisa. Wilhelm spent the next few months looking for a more suitable bride, but did not relinquish his emotional ties to Elisa.

It is alleged that Elisa had an illegitimate daughter by Wilhelm who was brought up by Joseph and Caroline Kroll, owners of the Kroll Opera House in Berlin, and was given the name Agnes Kroll. She married a Charles Friedrich Ludwig Dettman (known as “Louis”) and emigrated to Sydney, Australia, in 1849. They had a family of three sons and two daughters. Agnes died in 1904. Wilhelm saw his cousin, Elisa, for the last time in 1829. Elisa was later engaged to Prince Friedrich of Schwarzenberg, but the engagement failed. She died, unmarried, in 1834, of tuberculosis while at a spa seeking a cure.

Eventually, Wilhelm asked for the hand of Princess Augusta of Saxe-Weimar-Eisenach, fourteen years his junior, the daughter of Grand Duke Charles Friedrich of Saxe-Weimar-Eisenach and Grand Duchess María Pavlovna of Russia, sister of Emperor Alexander I and Nicholas I of Russia. Augusta met her future husband in 1826 when she was only fifteen years old and Prince Wilhelm was more than fourteen years older than her. Wilhelm thought the young Augusta had an “excellent personality,” yet was less attractive than her older sister Marie, whom Wilhelm’s younger brother, Charles had already married. Above all, it was Wilhelm’s father who pressed him to consider Augusta as a potential wife. 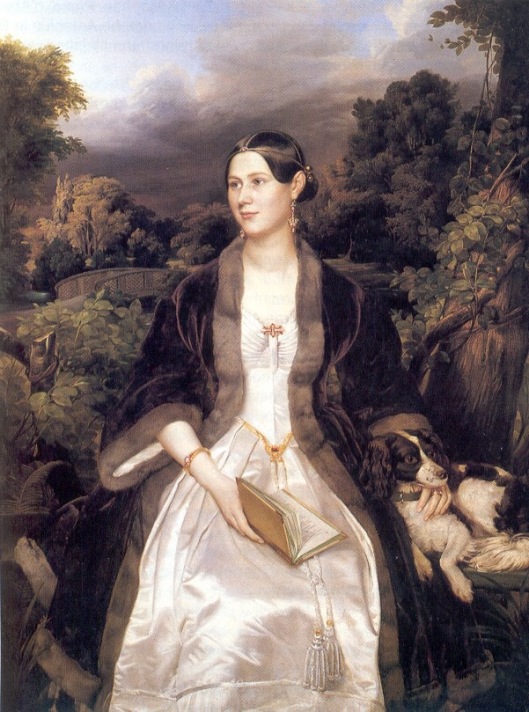 Their marriage which took place on on August 29, 1826 was outwardly stable, but not a very happy one. The first weeks of marriage were harmonious; Augusta was taken favorably in the Prussian King’s court, however, Augusta soon started to be bored with its military sobriety, and most courtly duties (which may have counteracted this boredom) were reserved to her sister-in-law, Crown Princess Elisabeth.

Historian Karin Feuerstein-Prasser has pointed out, on the basis of evaluations of the correspondence between both fiancées, the different expectations Wilhelm had of both marriages: In a letter which Wilhelm wrote on January 22, 1831 to his sister Empress Alexandra Feodorovna regarding Elisa Radziwill, that “One can love only once in life, really”, but confessed regarding Augusta that “the princess is nice and clever, but she leaves me cold.” Wilhelm also noted to his sister his mixed feelings were also due to his wife’s “lack of femininity”.

Wilhelm and Augusta did have two children. Friedrich Wilhelm (later Emperor Friedrich III of Germany), was born later that year on October 18, 1831, three years after their marriage and Louise, was born on December 3, 1838, seven years later.