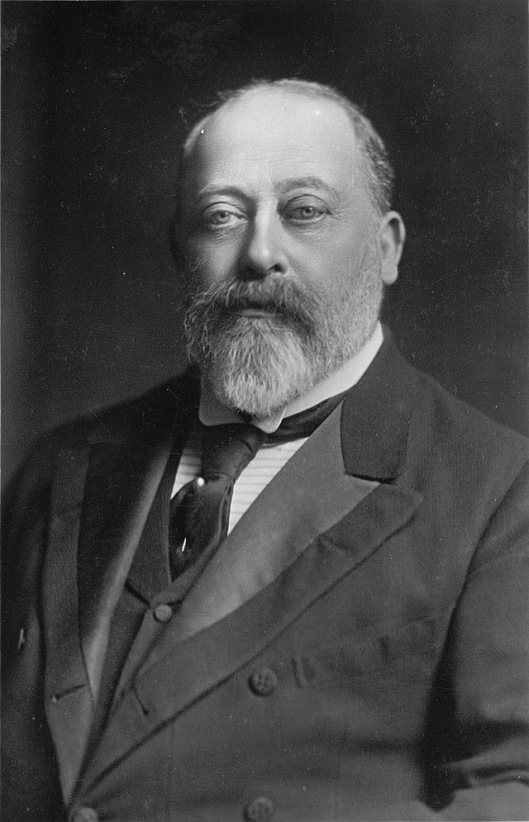 The eldest son of Queen Victoria and Prince Albert of Saxe-Coburg and Gotha, Edward was related to royalty throughout Europe. He was heir apparent to the British throne and held the title of Prince of Wales for longer than any of his predecessors. During the long reign of his mother, he was largely excluded from political power, and came to personify the fashionable, leisured elite. He travelled throughout Britain performing ceremonial public duties, and represented Britain on visits abroad. His tours of North America in 1860 and the Indian subcontinent in 1875 were popular successes, but despite public approval his reputation as a playboy prince soured his relationship with his mother.

In September 1861, Edward was sent to Germany, supposedly to watch military manoeuvres, but actually in order to engineer a meeting between him and Princess Alexandra of Denmark, the eldest daughter of Prince Christian of Denmark (future King Christian IX of Denmark) and his wife Louise of Hesse-Cassel. The Queen and Prince Albert had already decided that Edward and Alexandra should marry.

They met at Speyer on September 24 under the auspices of his elder sister, Victoria, who had married the Crown Prince Friedrich of Prussia in 1858. Edward’s sister, acting upon instructions from their mother, had met Alexandra at Strelitz in June; the young Danish princess made a very favourable impression. Edward and Alexandra were friendly from the start; the meeting went well for both sides, and marriage plans advanced. 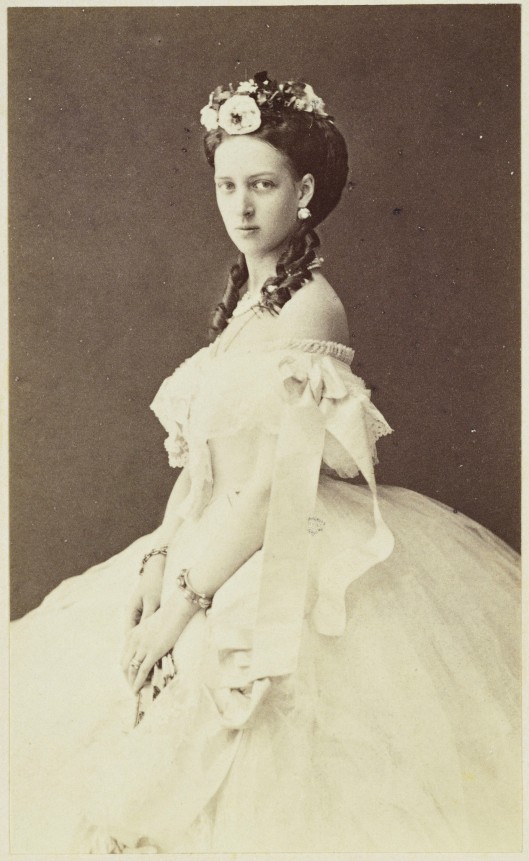 Edward married Alexandra of Denmark at St George’s Chapel, Windsor Castle, on 10 March 1863. He was 21; she was 18. The couple established Marlborough House as their London residence and Sandringham House in Norfolk as their country retreat. They entertained on a lavish scale. Their marriage met with disapproval in certain circles because most of Queen Victoria’s relations were German, and Denmark was at loggerheads with Germany over the territories of Schleswig and Holstein.

When Alexandra’s father inherited the throne of Denmark in November 1863, the German Confederation took the opportunity to invade and annex Schleswig-Holstein. The Queen was of two minds as to whether it was a suitable match, given the political climate. After the marriage, she expressed anxiety about their socialite lifestyle and attempted to dictate to them on various matters, including the names of their children. 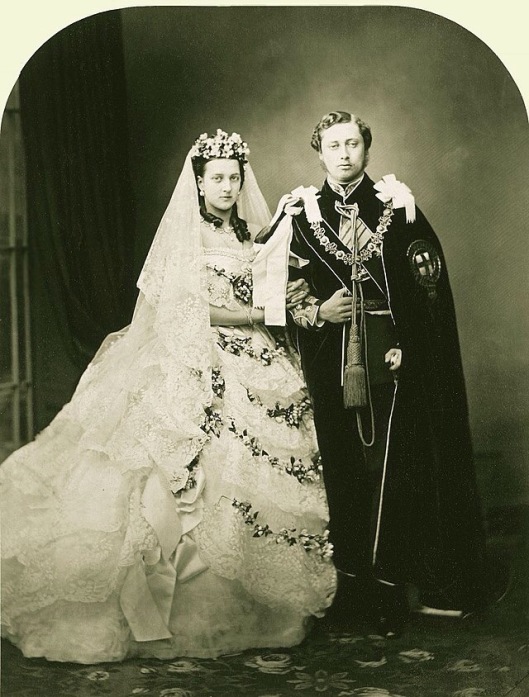 The Prince and Princess of Wales

During Queen Victoria’s widowhood, Edward pioneered the idea of royal public appearances as they are understood today—for example, opening the Thames Embankment in 1871, the Mersey Tunnel in 1886, and Tower Bridge in 1894, but his mother did not allow him an active role in the running of the country until 1898.

Edward was regarded worldwide as an arbiter of men’s fashions. He made wearing tweed, Homburg hats and Norfolk jackets fashionable, and popularised the wearing of black ties with dinner jackets, instead of white tie and tails. He pioneered the pressing of trouser legs from side to side in preference to the now normal front and back creases, and was thought to have introduced the stand-up turn-down shirt collar, created for him by Charvet.

A stickler for proper dress, he is said to have admonished Lord Salisbury for wearing the trousers of an Elder Brother of Trinity House with a Privy Councillor’s coat. Deep in an international crisis, Salisbury informed the Prince that it had been a dark morning, and that “my mind must have been occupied by some subject of less importance.” 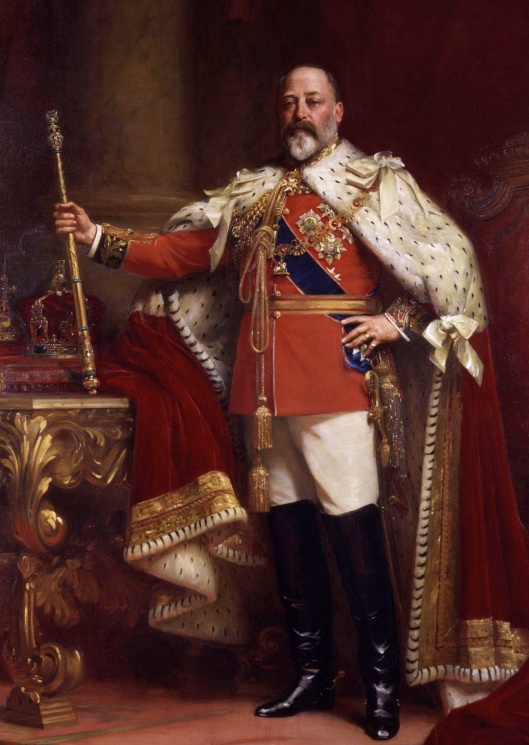 The tradition of men not buttoning the bottom button of waistcoats is said to be linked to Edward, who supposedly left his undone because of his large girth. His waist measured 48 inches (122 cm) shortly before his coronation. He introduced the practice of eating roast beef and potatoes with horseradish sauce and yorkshire pudding on Sundays, a meal that remains a staple British favourite for Sunday lunch. He was not a heavy drinker, though he did drink champagne and, occasionally, port.

When Queen Victoria died on January 22, 1901, Edward became King of the United Kingdom, Emperor of India and, in an innovation, King of the British Dominions. He chose to reign under the name of Edward VII, instead of Albert Edward—the name his mother had intended for him to use, declaring that he did not wish to “undervalue the name of Albert” and diminish the status of his father with whom the “name should stand alone.”

The numeral VII was occasionally omitted in Scotland, even by the national church, in deference to protests that the previous Edwards were English kings who had “been excluded from Scotland by battle”. J. B. Priestly recalled, “I was only a child when he succeeded Victoria in 1901, but I can testify to his extraordinary popularity. He was in fact the most popular king England had known since the earlier 1660s.”

Edward habitually smoked twenty cigarettes and twelve cigars a day. In 1907, a rodent ulcer, a type of cancer affecting the skin next to his nose, was cured with radium. Towards the end of his life he increasingly suffered from bronchitis. 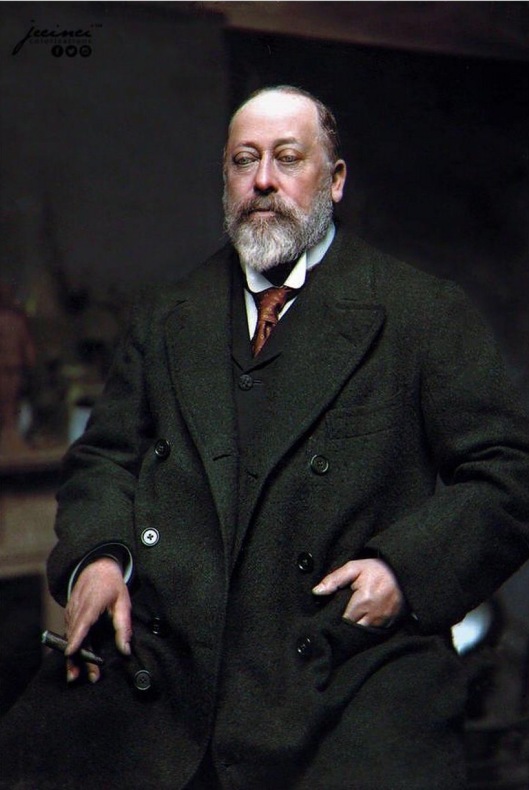 He suffered a momentary loss of consciousness during a state visit to Berlin in February 1909. In March 1910, he was staying at Biarritz when he collapsed. He remained there to convalesce, while in London Asquith tried to get the Finance Bill passed. The King’s continued ill health was unreported and he attracted criticism for staying in France while political tensions were so high. On April 27 he returned to Buckingham Palace, still suffering from severe bronchitis. Alexandra returned from visiting her brother, King George I of Greece, in Corfu a week later on May 5.

On 6 May, the King suffered several heart attacks, but refused to go to bed, saying, “No, I shall not give in; I shall go on; I shall work to the end.” Between moments of faintness, his son the Prince of Wales (shortly to be King George V) told him that his horse, Witch of the Air, had won at Kempton Park that afternoon. The King replied, “Yes, I have heard of it. I am very glad”: his final words. At 11:30 p.m. he lost consciousness for the last time and was put to bed. He died 15 minutes later. 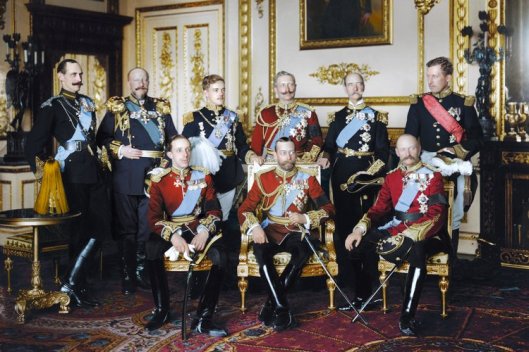 His funeral, held on 20 May 1910, marked “the greatest assemblage of royalty and rank ever gathered in one place and, of its kind, the last.” A royal train conveyed the King’s coffin from London to Windsor Castle, where Edward was buried at St George’s Chapel.