We’ve now reached the point in our survey of German History and the origins of the Holy Roman Empire that motivated me to do this history to begin with. After the treaty of Verdun in 843 and the establishment the Kingdom East Francia to first usage of the term Holy Roman Empire in the thirteenth century, this area of Central Europe was constantly in flux at a time when England and France (and later Spain) were moving toward being a centralized nation state. It is also at this juncture when terminology such as Kings of East Francia, King of the Germans and Roman Emperor have considerable overlap denoting the fact that the monarchy in German lands was constantly evolving.

Regional differences existed between the peoples of the different regions of the kingdom and each region could be readily described by contemporaries as a regnum, (Kingdom) though each was certainly not a kingdom of its own. The common Germanic language and the tradition of common rule dating to 843 preserved political ties between the different regna and prevented the kingdom from coming apart after the death of Charles the Fat. The work of Louis the German to maintain his kingdom and give it a strong royal government also went a long way to creating an East Frankish (i.e. German) state. 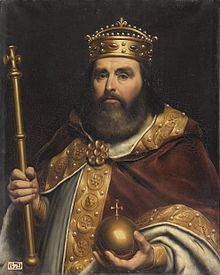 Charles the Fat was deposed in 888 by nobles and in East Francia Arnulf of Carinthia was elected king. The increasing weakness of royal power in East Francia meant that dukes of Bavaria, Swabia, Franconia, Saxony and Lotharingia (called the Stem Duchies) turned from appointed nobles into hereditary rulers of their territories. Kings increasingly had to deal with regional rebellions.

After the death of Louis III the Child on September 24, 911, the last ruler of the Carolingian dynasty, Conrad the Younger of Thuringia was elected was elected king of Rex Francorum Orientalium (East Francia) on November 10, 911 at Forchheim by the rulers of Saxony, Swabia and Bavaria. Conrad was the son of duke Conrad of Thuringia (called the Elder) and his wife Glismut, probably related to Ota, wife of the Carolingian emperor Arnulf of Carinthia and mother of Louis the Child.

Since King Conrad I of East Francia was one of the dukes of the Stem Duchies he found it very difficult to establish his authority over them. Duke Hienrich of Saxony was in rebellion against Conrad I until 915 and the struggle against Arnulf, Duke of Bavaria cost Conrad I his life. On his deathbed Conrad I chose Heinrich of Saxony as the most capable successor. 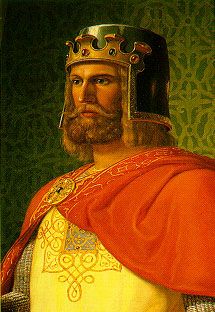 Heinrich I, King of East Francia, Duke of Saxony

This election of Heinrich of Saxony as King changed the kingship from Franks to Saxons, who had suffered greatly during the conquests of Charlemagne.

Under Arnulf of Carinthia the terminology Rex Francorum Orientalium was largely dropped and the kingdom, when it was referred to by name, was simply Francia. When it was necessary, as in the Treaty of Bonn (921) with the West Franks, the “eastern” qualifier appeared once more. Henry I refers to himself as rex Francorum orientalium, “king of the East Franks”, in the treaty.

By the 12th century, the historian Otto of Freising, in using the Carolingian terminology had to explain that the “eastern kingdom of the Franks” (orientale Francorum regnum) was “now called the kingdom of the Germans” (regnum Teutonicorum).

The 12th century imperial historian Otto von Freisingreported that the election of Heinrich the Fowler was regarded as marking the beginning of the kingdom, though Otto himself disagreed with this. Thus:

When the realm was divided between his son’s sons, one part was called eastern, the other western, yet both together were called the Kingdom of the Franks. So then in the eastern part, which is called the Kingdom of the Germans, Henry was the first of the race of Saxons to succeed to the throne when the line of Charles failed … [western Franks discussed] … Henry’s son Otto, because he restored to the German East Franks the empire which had been usurped by the Lombards, is called the first king of the Germans — not, perhaps, because he was the first king to reign among the Germans

Next up will be the imperial coronation of Otto the Great.

Here is the original post where I talk about Heinrich I the Fowler.