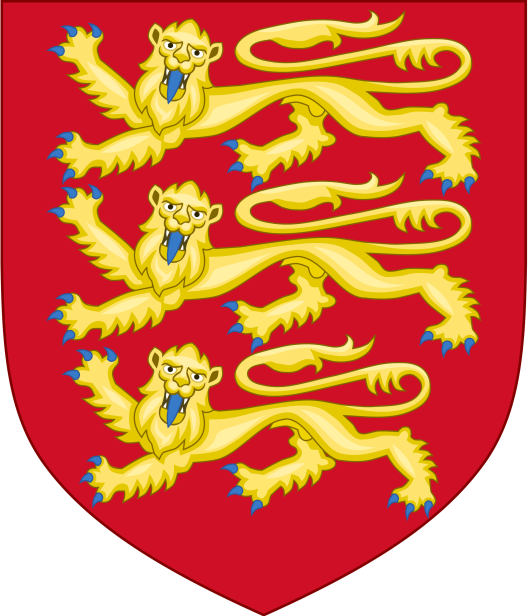 Arms of the Kingdom of England

Harthacnut (c. 1018 – June 8, 1042), sometimes referred to as Canute III, was King of Denmark from 1035 to 1042 and King of England from 1040 to 1042. He was the son of King Canute II the Great of Denmark, Norway, and England and Emma of Normandy. When Canute II died in 1035, Harthacnut struggled to retain his father’s possessions. Magnus I took control of Norway, but Harthacnut succeeded as King of Denmark and became King of England in 1040 after the death of his half-brother Harold Harefoot. Harthacnut died suddenly in 1042 and was succeeded by Magnus I of Norway in Denmark and Edward the Confessor in England. Harthacnut was the last Scandinavian to rule England.

Magnus Olafsson (c. 1024 – 25 October 1047), better known as Magnus the Good, was the King of Norway from 1035 and King of Denmark from 1042, ruling over both countries until his death in 1047. Magnus I was an illegitimate son of Olaf II of Norway, but fled with his mother when his father was dethroned in 1028. He returned to Norway in 1035 and was crowned king at the age of 11. In 1042, he was also crowned king of Denmark. Magnus ruled the two countries until 1047, when he died under unclear circumstances. After his death, his kingdom was split between Harald III Hardrada in Norway and Sweyn Estridsson in Denmark.

Edward was the son of King Æthelred the Unready and Emma of Normandy. He succeeded Canute II the Great’s son – and his own half brother – Harthacnut. He restored the rule of the House of Wessex after the period of Danish rule since Canute II conquered England in 1016.

During his childhood, England was the target of Viking raids and invasions under Sweyn Forkbeard and his son, Canute. Following Sweyn’s seizure of the throne in 1013, Emma fled to Normandy, followed by Edward and Alfred, and then by Æthelred. Sweyn died in February 1014, and leading Englishmen invited Æthelred back on condition that he promised to rule ‘more justly’ than before. Æthelred agreed, sending Edward back with his ambassadors.

King Æthelred the Unreadydied in April 1016, and he was succeeded by Edward’s older half-brother Edmund Ironside, who carried on the fight against Sweyn’s son, Cnut. According to Scandinavian tradition, Edward fought alongside Edmund; as Edward was at most thirteen years old at the time, the story is disputed. Edmund died in November 1016, and Cnut became undisputed king. Edward then again went into exile with his brother and sister; in 1017 his mother married Canute II. In the same year Canute had Edward’s last surviving elder half-brother, Eadwig, executed, leaving Edward as the leading Anglo-Saxon claimant to the throne.

Following Harthacnut’s death on June 8, 1042, Godwin, the most powerful of the English earls, supported Edward, who succeeded to the throne. The Anglo-Saxon Chronicle describes the popularity he enjoyed at his accession – “before he [Harthacnut] was buried, all the people chose Edward as king in London.” Edward was crowned at the cathedral of Winchester, the royal seat of the West Saxons, on April 3, 1043.

When Edward died in 1066, he was succeeded by Harold Godwinson, who was defeated and killed in the same year by the Normans under William the Conqueror at the Battle of Hastings. Edgar the Ætheling, who was of the House of Wessex, was proclaimed king after the Battle of Hastings in 1066, but never ruled and was deposed after about eight weeks.

About a century later, in 1161, Pope Alexander III canonised the king. Saint Edward was one of England’s national saints until King Edward III adopted Saint George as the national patron saint in about 1350. Saint Edward’s feast day is 13 October, celebrated by both the Church of England and the Catholic Church in England and Wales.