Her Majesty the Queen has conferred on HRH Prince Henry of Wales the titles Duke of Sussex Earl of Dumbarton and Baron Kilkeen.

AFter the Wedding Meghan Markle will be known as HRH The Duchess of Sussex. 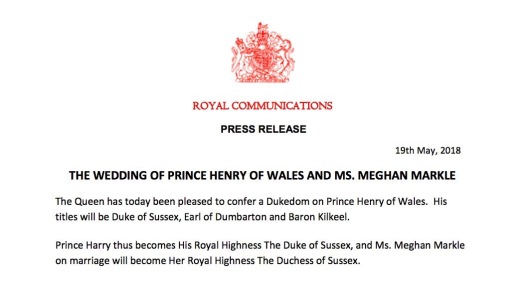 The First Duchees of Sussex

The title of Duke of Sussex was conferred upon Prince Augustus Frederick, the sixth son of King George III, on 24 November 1801. Prince Augustus Frederick married Lady Augusta Murray at St George’s, Hanover Square, Westminster in 1793, and then Lady Cecilia Gore at Great Cumberland Place, London, on 2 May 1831. Both marriages were in contravention of the Royal Marriages Act 1772; thus the couple’s children were illegitimate. Not being the Prince’s legitimate wife, Lady Cecilia could not be received at court. She was eventually (on 30 March 1840) given the title of Duchess of Inverness in her own right by Queen Victoria. Since Augustus Frederick had no legitimate issue, his titles became extinct on his death in 1843.

2 thoughts on “The First Duchess of Sussex.”