One of the political negotiations for the release of James I of Scotland was his marriage to Lady Joan Beaufort and this will be the focus of today’s posting. 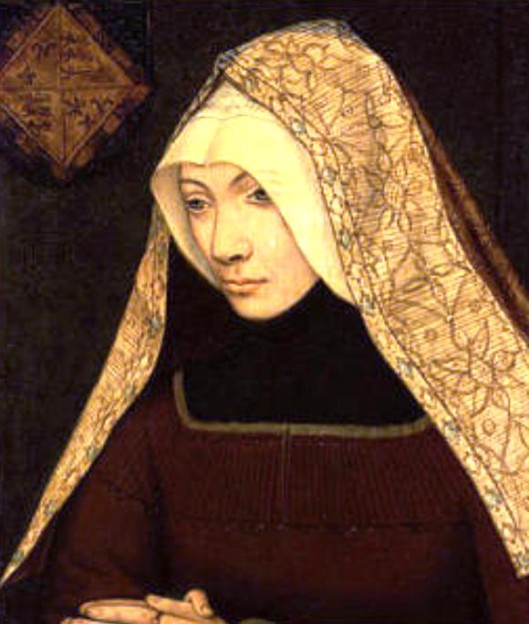 The regency council of the infant King Henry VI was inclined to have James released as soon as possible. In the early months of 1423 their attempts to resolve the issue met with little response from the Scots, clearly influenced by the Albany Stewarts and adherents.

The marriage of King James I of Scotland and Lady Joan Beaufort was a true love match and to some degree political. The regency council of Henry VI made the marriage between James and Joan part of the agreement for his release from captivity. It was believed that an English bride would make James more immalleable toward English policies and whims. Further, an alliance with the Beauforts was meant to establish his country’s alliance with the English, rather than the French, the Scots traditional ally. Negotiations resulted in Joan’s dowry of 10,000 merks being subtracted from James’s substantial ransom that was part of the demands on the Scots for the king’s release.

Joan Beaufort (c. 1404 – 15 July 1445) was a daughter of John Beaufort, 1st Earl of Somerset, a legitimated son of John of Gaunt, Duke of Lancaster (a son of Edward III of England) by his mistress (and later wife) Kathryn Swynford. Joan’s mother was Margaret Holland, the granddaughter of Joan of Kent (wife of Edward “the Black Prince” Prince of Wales, eldest son of Edward III of England) by her marriage to Thomas Holland, 1st Earl of Kent. This made Joan an extended member of the English Royal Family being she was also a half-niece of King Henry IV of England, great-niece of Richard II and  great-granddaughter of Edward III. Her uncle, Henry Beaufort, was a cardinal and Chancellor of England.

King James I of Scotland met Joan during his time as a prisoner in England, and knew her from at least 1420. James was with the court at Windsor, when he saw Joan for the first time while walking her little lap-dog in the garden, below his window. His narrow window afforded him only a limited view, but the Lady Joan walked the same route every morning. James, it seems was immediately smitten with Joan and wrote of her in his poem famous long poem, The Kingis Quair:

“Beauty, fair enough to make the world to dote, Are ye a worldy creature? Or heavenly thing in likeness of nature? Or are ye Cupid’s own priestess, come here, To loose me out of bonds”

One morning James managed to drop a plucked rose down to Lady Joan, which he saw her wearing the following evening at dinner. Their romance blossomed Lady Joan grieved over James’s imprisonment and even pleaded for him to be released. Soon they were parted as James accompanied Henry V in his dealings in France.

On September 3, 1420, Robert, Duke of Albany died at the age of around 80. His eldest son, 1420, Murdoch, now aged 58, inherited the Dukedom of Albany. He also inherited the Earldom of Fife and the Earldom of Menteith, and at last became Governor of Scotland in his own right. He would hold this position from 1420 to 1424, while King James I was still held captive in England. Few serious attempts appear to have been made by Duke Albany to return James to Scotland, but eventually political pressure compelled Murdoch to agree to a general council.

In August 1423 it was agreed that an embassy should be sent to England to negotiate James’s release. The marriage of James and Joan was part of the negotiations. On February 12, 1424, Joan Beaufort and King James were wed at St Mary Overie Church in Southwark. They were feasted at Winchester Palacethat year by her uncle Cardinal Henry Beaufort.

On March 28, 1424 A ransom treaty of 60,000 marks (an enormous sum) was agreed at Durham onto which James attached his own seal—he and his queen, accompanied by an escort of English and Scottish nobles, proceeded to Melrose Abbey, arriving on April 5, 1424, where he met the Duke of Albany to receive the governor’s seal of office. Upon the return of James I to Scotland, the Duke of Albany lost his position as Regent.

Murdoch, Duke of Albany, was arrested, along with his sons Walter and Alexander, and Duncan, Earl of Lennox were in Stirling Castle for their trial set for May 18, 1425, in front of a prorogued Parliament in the presence of the King. An assize of seven earls and fourteen lesser nobles heard the evidence and in a trial lasting just one day the four men were found guilty of treason.

Queen Joan of Scotland accompanied her husband on his return from captivity in England to Scotland, and was crowned alongside her husband at Scone Abbey. As queen, she often pleaded with the king for those who might be executed.

The royal couple had eight children, including the future James II, and Margaret of Scotland, future spouse of Louis XI of France.

Issue with James I of Scotland

6 thoughts on “James I, King of Scots: Part Three.”