Archbishop of Canterbury, Canute II of Denmark, Edward the Confessor, Harold Godwinson, House of Wessex, Kings and Queens of England

On this date in History: April 3, 1043. Coronation of Edward the Confessor as King of England.

Edward was the son of Æthelred II the Unready, King of England (978-1016) and Emma of Normandy, Edward succeeded Canute II the Great’s (1016-1035) son – and his own half brother – Harthacanute (1040-1042) (also known as Canute III) restoring the rule of the House of Wessex after the period of Danish rule since Canute II of Denmark conquered England in 1016. When Edward died in 1066, he was succeeded by Harold Godwinson, who was defeated and killed in the same year by the Normans under William the Conqueror at the Battle of Hastings. Edgar the Ætheling, who was of the House of Wessex, was proclaimed king after the Battle of Hastings in 1066, but never ruled and was deposed after about eight weeks.

Edward was crowned at the cathedral of Winchester, the royal seat of the West Saxons, on April 3, 1043.

The main elements of the coronation service and the earliest form of oath can be traced to the ceremony devised by Saint Dunstan for Edgar’s coronation in 973 AD at Bath Abbey. It drew on ceremonies used by the kings of the Franks and those used in the ordination of bishops. Two versions of coronation services, known as ordines (from the Latin ordomeaning “order”) or recensions, survive from before the Norman Conquest. It is not known if the first recension was ever used in England and it was the second recension which was used by Edgar in 973 and by subsequent Anglo-Saxon and early Norman kings. 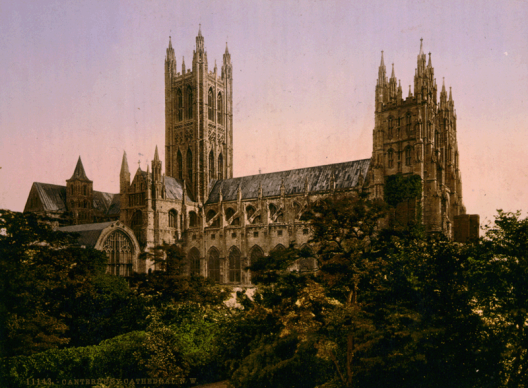 Some background on Eadsige, Archbishop of Canterbury who crowned Edward as King of England.

Eadsige was a royal priest for King Canute II before he arranged for him to become a monk at Christ Church, Canterbury about 1030. About 1035, he served as a suffragan or coadjutor bishop to Archbishop Æthelnoth of Canterbury, with his see located at the church of St Martin in Canterbury.He was translated to the Archbishopric of Canterbury in 1038 after Æthelnoth’s death In 1040, he journeyed to Rome to receive his pallium from Pope Benedict IX. Eadsige may have crowned Harthacnut in 1040, but he definitely crowned Edward the Confessor on 3 April 1043 along with Ælfric Puttoc, the Archbishop of York.